Conan and the Critic 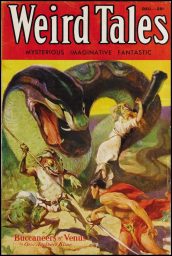 It is an eerie thing to reread the half-forgotten stories treasured in one’s youth. For better or worse, the hold haunts never look the same. The worse happens when eyes grown cynical with age will see tinsel and rubbish where once glamor gleamed as fresh and expectant as the sunrise in the Garden of Eden. And, to the contrary, the better happens when one discovers added layers of wonder, or deeper thoughts to savor, than a schoolboy’s brain can hold.

So I decided to read, in their order of publication, the Conan stories of Robert E Howard. I was not a devout fan of Conan in my youth, so some stories I had read before, others were new. But in each case I was surprised, nay, I was shocked, at how much better they were than I recalled.

In this space, time permitting, I hope to review each tale as I read it, starting with Phoenix on the Sword. But before any review talks about what Conan is, let me tell the candid reader what Conan is not.

As with HP Lovecraft’s spooky tales or with the adventure yarns of Edgar Rice Burroughs, the unwary reader often confuses the popularized and simplified versions of iconic characters, Cthulhu or Tarzan, with the character as first he appeared in the pages of a pulp magazine. Tropes now commonplace, endlessly copied, at the time were stark and startling and one-of-a-kind.

The original character who is later taken into a franchise or revised for comic books, film and television, or who is copied or reincarnated by the sincere flattery of lesser talents, is inevitably more raw and real than such dim Xeroxes of Xeroxes. These franchise writers, imitators, and epigones rarely do justice to the tale they copy, some, for whatever reason, do grave injustice.

And, of course, certain writers of modest talent and no memorable accomplishment delight to assume the pen and mantle of the art critics and connoisseur in order to diminish the stature of author they cannot match. They do a deliberate injustice to iconic characters, and further muddy the perception.

Here, for example, is a quote from the loathsome Damon Knight. If the reader is surprised I use so harsh a word for this well-known figure in science fiction, please reflect that he is not well known for any creative writing, only for his ludicrous claim to be a critic:

The Coming of Conan, by Robert E. Howard, is of interest to Howard enthusiasts, who will treasure it no matter what anyone says, and to students who may find it, as I do, an intriguing companion piece to L. Sprague de Camp’s The Tritonian Ring.  Howard’s tales lack the de Camp verisimilitude – Howard never tried, or never tried intelligently, to give his preposterous saga the ring of truth – but they have something that de Camp’s stories lack; a vividness, a color, a dream-dust sparkle, even when they’re most insulting to the rational mind.

Howard had the maniac’s advantage of believing whatever he wrote; de Camp is too wise to believe wholeheartedly in anything.

This book contains the only fragment of a Conan story that I remember from Weird Tales – Conan tippy-toeing along a ledge with a naked girl held by the hair, and then dropping her carefully into a cesspool – which turns out to be neither as isolated nor as insignificant as I had supposed.  Another naked lady friend of the hero’s, in another episode, winds up hanged to a yardarm with a rope of jewels; and for that matter, hardly anyone, man or woman, squeaks through the Conan saga without some similar punishment, except Conan himself.

All the great fantasies, I suppose, have been written by emotionally crippled men.  Howard was a recluse and a man so morbidly attached to his mother that when she died he committed suicide; Lovecraft had enough phobias and eccentricities for nine; Merritt was chinless, bald and shaped like a shmoo.  The trouble with Conan is that the human race never has produced and never could produce such a man, and sane writers know it; therefore the sick writers have a monopoly of him.

It would be a tedious task indeed to wade through this mass of sticky and malodorous bullshit to rebut each sly insinuation and answer each peevish insult as it deserves.

We need not dwell long here in the chamberpot of Mr. Knight’s performance as a critic. I am content with noting that there is not a word of actual criticism anywhere in the passage. It is merely a stream of insults against Robert E Howard, calling him everything from unintelligent to maniacal to emotionally crippled to sick, with occasional flippant insults against Mr. Howard’s fans and admirers, not to mention studied insults against other luminaries of the field.

(So is the candid reader to dismiss unread THE MOON POOL and SEVEN FOOTPRINTS TO SATAN and THE SHIP OF ISHTAR, which were seminal works of science fiction and fantasy, on the grounds that the author thereof was chinless and bald and shaped like a shmoo? Is the reader not to judge the work of Homer and Virgil and Milton until the details of their jawlines and coiffeurs are known?)

When Mr. Knight dismisses Conan as someone who does not exist, he betrays a faulty understanding of what writing fiction is about. This disqualifies him from his pretense of being critic.

Fiction writers are not newspapermen nor are we scientists, attempting dispassionately to portray the world as it is. All art is abstraction and exaggeration. The pen both ornaments reality and pares away distractions, to hone things down to their essentials. Adventure yarns contain romantic characters, that is, larger than life heroes and villains, meant to embody ideals and archetypes. The things are writ large to bring to our weak eyes what might otherwise escape us.

Just as characters in a horror story act more frightened and more helpless than real people would, those in heroic tales act more bold and forthright. This is because that is what the story is about. It is what story telling is. Stories are about the things in which we believe.

In scoffing that the truly wise believe wholeheartedly in nothing at all, Mr. Knight further disqualifies himself. He is no fit critic. I doubt he a fit member of the human race. The comment is either rank hypocrisy or a grotesque self confession.

Mr. Knight’s trick of merely asserting, without proof and without honesty, the shortcomings in the inner heart of a man he never met is a simple game, and anyone can play it. For example, a hypothetical unscrupulous commenter could claim that what Mr. Knight’s crooked comments betray about Mr. Knight’s own masculinity, when he so unconvincingly dismisses as unreadable the portrayal of a romanticized yet savage fighting-man like Conan, a figure of rugged proportions and gigantic passions, as some sort of impossible and unrealistic product of sickmindedness, is too obvious to bear repeating. The gelding hates the virile.

Does he likewise dismiss the portrayals of Achilles, Aeneas, Roland, Beowulf, Zorro, or any other man of action from myth, history, or story? No?

For another example, were a hypothetical commenter to play his game, he might loftily assert that one need make no comment about Mr. Knight’s obsession with a naked woman being dunked in a cesspool, which is, tellingly, the only fragment Mr. Knight remembers from a tale he read in the magazine. It is something only an sexually deviant mind would sees as interrelated. That another woman in another story is hanged as a pirate, or that other men and women in adventure stories suffer hardships, goes beyond merely being dishonest, smarmy and slimy rhetoric. It is an unwitting self confession. The neurotic invariably accuse others of his own neuroses.

Such things would be easy enough to write, were our hypothetical commenter to be as unfair to him, as Mr. Knight was to Mr. Howard.

Lest we be accused of unfairness, let us must amend the harsh statement above that no one remembers Mr. Knight’s failed fiction career. After herculean effort, I was indeed able to bring to mind a single story written by Mr. Knight: a short story called ‘To Serve Man’ made into a respectable episode of Rod Serling’s TWILIGHT ZONE, and parodied in THE SIMPSONS. It is, of course, a shaggy dog story, whose sole twist is based on a pun in English, which for some reason is the same language in which the space aliens write their cookbooks. There is not even the smallest trace of plot present, nor any memorable character, human or alien, nor any real science fictional speculation. It is basically a campfire tale a boy scout might tell to spook his fellow campers. One would think a man whose sole contribution to the art of criticism was obsequious love letters to authors he wishes to magnify or verminous libels against authors he seeks to demean would have attempted more serious craftsmanship.

The sad thing is that such character assassinations need only score a glancing blow to do their work. Even if the honest reader is disgusted that creatures like Mr. Knight are willing to libel a skilled author who commits suicide, and is appalled that Mr. Knight would spit on a man’s good grave merely in order to mock his work, and even if this reader thinks Mr. Knight is overstating the case, rare indeed is the reader able to see that the whole thing is false from stem to stern. We give even liars the benefit of the doubt. We assume there is a grain of truth beneath the libels.

Such a reader is likely to absorb, unquestioned, in his unconscious mind the impression that Conan is a simplistic figure from a boy’s adventure yarn, a caricature of schoolboy dream-dust, unintelligently portrayed, a guilty pleasure at best. None dare to admit he is one’s favorite character, and, even if beloved, none will say Conan is to be taken seriously. After all, the wise man believes nothing, does he not?

Such a reader will picture Conan as a man in a bearskin loincloth, inarticulate, grimacing, with a shapely dancing girl clutching his knee while he cleaves the skull of a devil-beast or giant snake with a bloody ax.

That reader will be as surprised as I was on rereading these tales, particularly the earlier ones from 1933.

In the first Conan tale, Phoenix on the Sword, Conan is the king of a turbulent but rich and powerful nation, facing a conspiracy of embittered and ambitious nobles, weary of the burdens of rulership, and, in the fight scene, he is properly accoutered in cuirass, with shield and plumed casque near at hand.

The sole mention of any dancing girls, clothed or not, is when Prospero, the king Conan’s advisor, is cautioned to be on seemly behavior when visiting the court of king Numa.

However, Conan does cleave skulls, of men and devil-beast alike.

The reader is like to be surprised at this first tale at how badly untrue are critic’s dismissals of Conan as unintelligent, dreamlike, unreal, et cetera et ad nauseum.

The setting and tone in Phoenix on the Sword, are grim, the theme is trenchant, particular in the era when it was written, in the island years of peace between two world wars.

Both the background world and the foreground characters are expertly drawn is a few bold and simple lines, and both Conan’s world and Conan’s brooding figure continue to loom in the imagination, eighty-four years and counting since the time he stepped forth, brooding, blue-eyed and black-haired, melancholic, stark, huge and terrible, larger than life in the pages of Weird Tales.

But a proper review deserves its own column.