Conan the Barbarian: A True Masterpiece 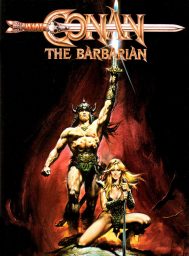 Most works derived from Robert E. Howard’s Conan are lousy.  Conan the Destroyer (1984), while it has a few amusing elements, is ultimately a mediocre, forgettable 80s swords-and-sorcery flick.  There was a TV series that ran from 1997 to 1998 called Conan: The Adventurer.  It was horrendous.  I mentioned a children’s cartoon called Conan: The Adventurer from the early 90s which is merely decent for its genre, if nothing special, which already places it near the top of Conan properties.  And I’ve refused to see the Conan the Barbarian (2011) remake, although virtually everyone is agreed that it’s putridly awful.

But then we come to Conan the Barbarian (1982).  Not only does it defy the odds, but it’s a genuine masterpiece right up there with the greatest American films I’ve seen, like Network, Cool Hand Luke, and 12 Angry Men.

To understand the movie is to understand its principal creator, writer and director John Milius.  Milius graduated USC Film School alongside his friends Francis Ford Coppola, George Lucas, and Steven Spielberg.  He was, by most accounts, including Spielberg’s, the most talented among the four men.

Milius wrote Apocalypse Now for Coppola, one of the most impressive screenwriting achievements in history, successfully adapting Conrad’s Heart of Darkness into a great film.  He also wrote and directed many other significant pictures, such as Dillinger (1973), The Wind and the Lion (1975), Big Wednesday (1978), Red Dawn (1984), and Farewell to the King (1989).

And yet, he never attained the fame nor received the projects that his three more famous friends did.  Why?

Well, Milius was, by his own admission, a right-wing extremist.  A gun nut and rugged individualist.  Unlike his hippie classmates, Milius first wanted to become a Marine during the Vietnam War to kill some Charlie and was devastated when he was rejected due to his chronic asthma.  And for his political views, especially after Red Dawn, Milius was relentlessly blackballed by Hollywood, despite his tremendous talent.

Milius was also a keen intellectual, a voracious reader and constant story-teller who loved classic literature, history, myth, Shakespeare, and weaved them all into his stories.  One can learn more about this endlessly fascinating man in the surprisingly excellent documentary Milius (2013). 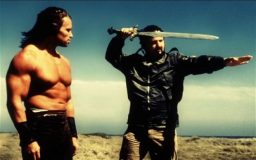 Conan the Barbarian was Milius’s personal statement about himself as a man.  As he has said on various occasions, “I AM Conan the Barbarian”.  This is reflected in the character played by Arnold Schwarzenegger.  While not the same as Howard’s creation, he comes the closest by embodying the same adventurousness, wanderlust, commanding will, cleverness, and inner resolve.

And Milius had an especial gift for dialogue.  What man or boy can listen to this opening scene from the movie about the Riddle of Steel and not be stirred?

Which brings us to another key point.  I had seen the movie at least eighty times before I realized that it’s also a love letter to Sergio Leone and his spaghetti Westerns!

The beautiful, desolate, rolling landscapes stretching as far as the eye can see. The extreme, constant facial close-ups. The larger-than-life, incredible heroes and villains. A bitter, desperate tale of revenge. The outstanding performances perfectly suited to the characters. (Arnold as Conan, and James Earl Jones as the merciless Thulsa Doom)

While Milius channeled Leone, composer Basil Poledouris produced a soundtrack on the level of Ennio Morricone’s best. Whenever I think of the movie, I instantly start humming the tune to The Anvil of Crom. The orchestral score is in every scene, wonderfully reflecting the gorgeous setting or the bloody, vicious fighting.

But while Milius was making his own version of a Leone Western, in some ways he surpassed the greatest of the Italian maestro!

While Leone was very good at dialogue, he was not on the same caliber as Milius. Without ever being over the top or cheesy, the quotes convey the mystery and excitement of a vivid fantasy world.

In addition to the opening speech above, Conan’s prayer to his God Crom is among the best speeches I have heard in any film, let alone one in the action/adventure genre.

There is a pervasive sense of sadness throughout the film. As the narrator constantly mentions; “…once, but long ago…” Everywhere Conan goes, there is death and decay, and he himself is a lonely, often sad figure.

His parents are murdered. His kinsmen are all dead. When Conan visits a tomb, he sees the remains of fierce warriors, once no different from himself, now nothing but creaking, dusty bones forgotten by time.

Finally, when Conan is captured by a king, a once-proud, noble, and feared ruler, he encounters an old, heartbroken man who cares nothing for all his jewels, wealth, or power, but only a stupid, treacherous daughter, now under the control of Thulsa Doom.

Even the ending doesn’t provide a respite; Conan eventually becomes a king, but wears the crown under a “troubled brow”.

And yet, despite the inescapable undercurrent of sorrow, it’s an epic tale of one man’s personal quest. In the end, he does achieve something meaningful, something exceptional that will be remembered by generations of later men. As did Milius himself.