One of my finds at a stop at Mac’s Back Paperbacks on Coventry Road in Cleveland Heights last month was an upgrade of Tanith Lee’s Cyrion. I had read some of the Cyrion stories in various sword and sorcery anthologies about 31 years ago. I have a very beat up used copy of the D.A.W. paperback (#499) but I don’t remember specifically reading it.

This past week, I sat down and read a story or two every night from the paperback collection. First here are the contents of the D.A.W. paperback:

As you can see, Cyrion was Tanith Lee’s go to character for the various sword and sorcery anthologies coming out at that time. Rereading these stories after an interlude of 30 years, I gained some new insights.

First, these stories are dense. You can’t blow throw them in 20 minutes but have to slow down and pay attention to small details given by Lee in the narrative.

The setting is an alternate history set what our world would be called the Levant. Jerusalem is Heruzala, Tiberias is Teboras, Caesaria is Casireia, Jaffa is Jebba etc. Instead of Romans, you have Remusans, Cassius must have founded a dynasty instead of Caesar. The timing is a medieval version of the Crusader Kingdom of Jerusalem with western kings, knights, and knight-priest orders present. A version of Islam does not appear to be present.

Cyrion is described by Lee as:

“The noon sun, raying through the orange trees, fired his elegant silk clothes, and revealed his hair as pure as pure light. It was a fitting halo for the marvelous face Mareme had compared to an angels’s.” – “Cyrion in Wax”

“The sunlight struck a silver-gold burnish on the pommel of the sword that was also the color of his hair. His left hand was mailed in rings…If the watchers in the city marked that Cyrion was as handsome as the Arch-Demon himself, they would not have been the first to do so.”- “A Hero at the Gates”

These are not blood and thunder stories. Two stories into the book, it dawned on me. This is Tanith Lee writing Sherlock Holmes as a sword and sorcery series. Or rather Lee’s writing a character of the British gentleman adventurer in the tradition of Bulldog Drummond, Simon Templar (aka The Saint), and even James Bond.

In some of the stories as “One Night of the Year” and “Perfidious Amber,” Cyrion is a cipher while the mystery is unraveled very much in Sherlock Holmes manner. Others has him as a master of disguise and foiling skullduggery ala the Saint as in “The Muderous Dove.”

“A Hero at the Gates” and “Cyrion in Bronze” come closest to true sword and sorcery fiction though either could have been occult investigator stories in a different setting. 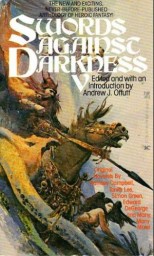 Lee made the wise decision to get a book out of the character. She had six stories in various publications. She created a 304 page book by adding “A Lynx with Lions” and the short novel “Cyrion in Stone.” “Cyrion in Stone” is essentially a Sherlock Holmes mystery novel with a witch cult thrown in. It is very much in the tradition of Hound of the Baskervilles.

So, the next time there is a Sherlock Holmes pastiche anthology published, the editor should give thought to adding a Cyrion story to the mix.

One other thing, you can tell a woman created the character. Cyrion doesn’t use his sword too much and generally against a supernatural menace if he has to. His handsome features are described almost to the point of beauty. When riches are his for the taking he throws them into the crowd in “A Hero at the Gates” and takes only one bracelet worn by a long dead girl in “One Night of the Year.” He may be an Alpha male, but he is an idealized Alpha male as perceived by a woman.