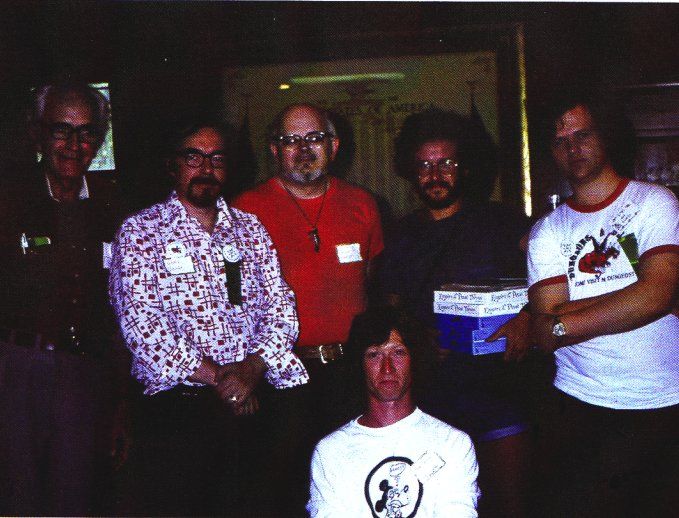 I just got some interesting feedback from David R. Megarry on an old post:

I fail to see why nobody looks at the journey through the Caves of Moira when they do a comparison between Tolkien and D&D. The description is a perfect example of a dungeon crawl. It is the image I had in mind when I created the Dungeon! Fantasy Board Game. Arneson and I taught Gygax how to play in a role playing setting in November 1972.

Okay, let’s talk about this.

First off, what happened at the table of Dave Arneson and David R. Megarry is a topic worthy of its own book. I don’t think near enough light has been shed on that. And I don’t know near enough about it.

Second… the reason I make my case the way that I do is that a great many people have accused Gygax of being a liar because they can’t imagine that he was telling the truth when he claimed that The Lord of the Rings was no great influence to him. And while I’ve given no great thought to the question of what other faults the man may or may not have had, on that point he was absolutely being honest and the historical record exonerates him.

Granted, Tolkien was influential to other designers of his cohort. Just as one example, the Chainmail fantasy supplement was developed from Leonard Patt’s Battle of Pelannor Fields miniatures battles. But most people questioning Gygax’s claims about the literary inspirations of the game are not aware of how the template for the sprawling Mega-Dungeon concept came from Margaret St. Clair’s Sign of the Labrys, that Jack of Shadows had a direct impact on the thief’s skills, that Roger Zelazny’s Amber stories influence the illusionist spells, the psionics is pulled from Sterling Lanier’s Hiero’s Journey, or that Poul Anderson wrote an entire book about what would turn into the Paladin class.

Even where people are aware that there are literary sources to game elements, they still manage to get it wrong. Most people think the alignment system is from Michael Moorcock. They aren’t aware of Poul Anderson’s role in its genesis just like they don’t know that he is the source of regenerating trolls. Most people do know that they the spell system is from Jack Vance’s Dying Earth stories. But they don’t know that the idea for reversing spells is straight out of The Eyes of the Overworld. Just like they don’t know that de Camp and Pratt influenced AD&D’s system of spell components, the situation in the Hill Giants’ steading in module G1, and even a bit of the underpinnings of planar cosmology.

Sure, most people play even the early editions of D&D as if they were built for a vaguely Tolkienesque fantasy setting. And then they complain about how horrible it is at doing just that. Nothing in it works the way their concept of fantasy would lead them to expect! And there’s a reason for that.

The architect for the sort of rules that form the bedrock of the fantasy role-playing game hobby derive from the works of a dozen fantasy and science fiction authors. Tolkien did play a role in influencing the formation of the game. Nobody argues that. But when the game was being put together, he was not synonymous with fantasy the way he is today. Indeed, in the early seventies he still had not yet displaced Lord Dunsany as being the most influential person in the field. And Gygax is not some kind of outlier in this, either. Tunnels & Trolls has pretty well the same set of literary antecedents.

Again, Gygax was influenced by Tolkien. But he didn’t much care for the guy’s work. Edgar Rice Burroughs, Fritz Leiber, and Robert E. Howard are what fired his imagination. And when he sat down to play he was more likely to send his players to the world of Jack Vance’s Planet of Adventure series than to anything resembling Middle Earth. And most people today can’t imagine that being the case.

I think the game is much more fun when you can.