Destroyer of Worlds, The Earth a Machine to Speak, and the Wandering Witch 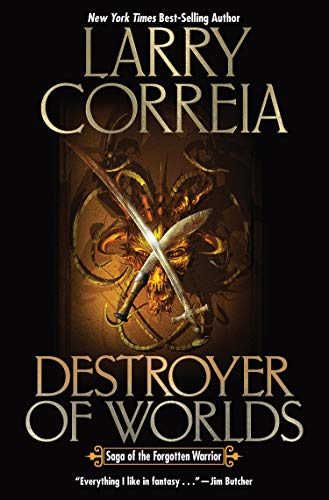 The time for the extermination of the casteless untouchables has come. Only Ashok Vadal and his battle-tested Sons of the Black Sword fight for the fleeing nameless, in the name of an unknown god that Ashok cannot bring himself to believe in. But Ashok knows his duty, even if that forces him to cross blades with his sword brother, the Lord Protector Devedas. And their duel will shake the foundations of the Empire to its core.

Larry Correia’s trilogies tend to follow the same course. So far, his pattern of explosive first book, tedious but necessary second, and a nuclear-hot finale is holding, even though Destroyer of Worlds is just a conclusion to Act One, not the completion of the series.

Ashok even gets character development between brutal battles, as he shifts his single-minded purpose from the Law to something more personal. The romance that results is awkward, but it fits Ashok’s near robotic personality and obsessive purpose. The forces that forged Ashok’s zealotry left little else to his personality, after all, so it a relief that Correia did not travel down the well-trod road where a sudden girlfriend changes a stoic into an openly expressive and emotional man. Ashok is still a zealot driven by duty, but his understanding of duty has widened slightly. And this new understanding will shatter the South Asian-skinned version of a Legend of the Five Rings RPG world.

But no one reads Correia for romance, especially when the clash of steel is in the air. And the action does not disappoint. Some science fiction authors pride themselves on being bards of the soldiers. Correia understands men of violence. And he pairs that understanding of motive, emotion, and will to the marriage of audacity and plausibility that sets his fight sequences apart. Better still, the action scenes drive the plot forward to the inevitable clash of brothers. And it wouldn’t be a Larry Correia novel without someone, somewhere firing a gun. Even in an South Asian-themed fantasy.

At this point, if Sons of the Black Sword becomes Correia’s main series, I wouldn’t be disappointed. 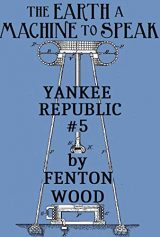 Here ends the story of Philo Hergenschmidt, as told to his granddaughter, Agnetha. He waited fifty years to tell his story, long after the statue of limitations had expired and there was no one left to be harmed by the telling of it. It ranges from the apocryphal, to the questionable, to the impossible.

At least some of it is true.

Fenton Wood’s Yankee Republic is much beloved here at the Castalia House blog, with reviews from multiple bloggers. The series follows a young radio engineer travels an alt-history America, as he encounters primeval gods, mythical beasts, and tall tales come to life, in a quest to build a radio transmitter that can reach the stars. Such a tale risks turning into the dreaded “men with screwdrivers” fiction lamented occasionally here. But Wood instead asks, what would Tom Sawyer do with a radio set? The result is a glorious cross between Tom Swift and John the Balladeer. And, sad to say, The Earth a Machine to Speak brings Philo’s journey to an end.

But what an end.

The wanderer must return home, after all. But one last, stunning act of audacity remains: turning on an impossible radio transmitter for one short shot at talking with the stars. The result continues Wood’s exploration of what truths may lie in the tall tales, fables, and legends shared by children and adults. After all, at least some of those stories have a kernel of truth, no matter how outrageous.

But where shall Philo return to? Wood’s alternate Anglo-Saxon America is one of those worlds which never was but should have been. And thus it is hard for the reader not to feel a twinge of that sentimental home-calling for a place that does not exist…

…or does it? For what truths about our world are shrouded in the tall tales of the Yankee Republic? 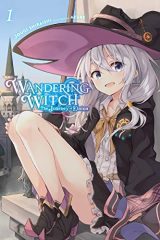 Inspired by a beloved series of books from her childhood, Elaina travels the world as a wandering with. She observes the people in each new town, adding new stories to her journal. But the wandering life is one of a constant stream of good byes, so Elaina finds herself mixed up in a series of increasingly melancholic adventures.

The Wandering Witch: The Journeys of Elaina, by Jougi Shiraishi is a rare, episodic short story collection. Elaina is a “cute witch”, a type of magical girl that uses the fashions of Western witches without any of the folklore, horror, or immorality associated with Western witches. As such, like in Little Witch Academia and Kiki’s Delivery Service, many of Elaina’s stories focus on her studies or how magic adds a convenience to everyday life. The almost soapy interactions between the various strangers and customers is expected in such a slice of life travelogue. What I didn’t expect were the continued brushes with the weird tale, or the constant, final sentence twists that give each story into a more melancholic understanding of the events.

The Wandering Witch actually brings something different to the novelty-choked light novel field: episodic story instead of gimmickry. Some of the formulas used are familiar to the pulp reader, but Elaina is not heroic nor a pulp protagonist. Her stories are written as though they come straight from her journal, with constant flirtations with the aggressive attention seeking that characterizes male light novel authors writing teenaged girls in first person. But those die down as Elaina finds her place in each story to watch events unfold. She is content to remain an observer as she wanders from town to town, and only interferes if the course of events affects her. Sometimes this means rooting out traitors to the crown, but other times, it might mean that she leaves a man-eating plant alive as she moves on to the next town. But always with that undercurrent of sadness to her departure.

By the end, twist fatigue had set in, and some of the upcoming revelations had been telegraphed, such as the identity of Elaina’s teacher and her relationship to Elaina’s favorite books. But light novel short story series are not common in English. And the sense of weird, whenever encountered, felt as though it might have found a home in classic Weird Tales.