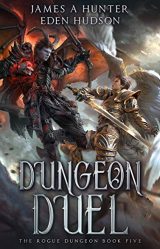 Roark van Graf’s struggles have taken him from a deposed noble fighting against a tyrant to the basest cannon-fodder in an MMO to lord of a mighty alliance of dungeons. But the tyrant’s forces have followed him through the portal into the game world. As players and NPCs line up on either side of Graf’s rebellion, the struggle spills out into our world. The tyrant has found a way to coerce the developers into nerfing Roark and his allies. Now Roark must move to save his followers across three worlds, before the tyrant–and the developers–end them all.

eden Hudson and James Hunter continue their genre-blending Rogue Dungeon series in Dungeon Duel. Here, they combine isekai portal fantasy, litRPG progression fantasy, dungeon maker fantasy, and a heavy dollop of epic fantasy into a whirlwind of trolls and angels fighting across fantastical, virtual, and present-day worlds. In that, Hudson and Hunter have solved the problem facing most dungeon makers: what to do when the hero conquers everything around him. The clever melding of the three worlds gives MMO gamers the ultimate fantasy: the ability to access their characters’ skills in real life. But even that fantasy has a price. With the stakes ramping up, the series’ goofy humor takes a back seat, and what first appeared to be the final volume spills out into more lands, pages, and books to come. As the final clash between Roark and the tyrant approaches, there are hopes that the Rogue Dungeon series can do what few have done–deliver a satisfying ending. 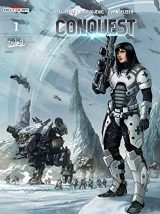 After a cataclysm has reduced humanity to five resettlement fleets, the first fleet comes across the habitable planet of Icelandia. After thawing to a disturbing number of new medical treatments, Oberleutnant Kirsten Konig leads the first contact expedition to the native tribes. But strange visions plague her, visions Konig believes are tied to the planet. As the resettlement plans fall victim to strange sabotages and alien raids, Konig finds herself in the middle of the winds of conspiracy, winds that tie the fate of the first fleet to fate of Konig’s daughter.

Written by Jean-Luc Isitin and drawn by Zivorad Radivojevic, Conquest: Icelandia is the first tale of the doomed resettlement fleets. It opens with an intriguing take on suspended animation and the recovery from it before diving into conspiracies and secret histories that show that humanity has yet to leave its destructive tendencies behind. Konig might be a glamorous fanservice fatale of a strong female character, but she avoids the waifish schoolgirl clichés. Her motivation is grounded in the most understandable and dangerous of desires, one noticeably absent from most practitioners of pixie-fu: the protection of her child. Radivojevic’s depiction of the resettlement fleet might be grounded in the same influence as Avatar, filled with powerful and boxy machine suits instead of sleek mecha. And Konig’s troop are drawn in a muscular, larger-than-life fashion. But the overall tone is melancholy, and the sequels defeatist and punishing.  At least Icelandia has the brief glimpse of hope amidst its setbacks, which elevates its moody warnings beyond crushing defeat.