Last week was #SpaceOperaWeek, so I’m a bit late to the party. Still, any time is a good time for space opera!

Being a relative newcomer to both Appendix N and the pulps is a mixed bag. On the one hand, oh man – what an embarrassment of riches! Of what I’ve been able to get my hands on, so much has been awesome sauce! What’s fallen short of that empirical benchmark has at least been somewhat educational, as a fan of SFF. On the other hand, what a glut! What a dilemma of choice! Do I keep reading all these kickass Jack Vance stories, or check out this C.L. Moore everyone has been talking about? And there are all those Edgar Rice Burroughs series just waiting to be read! Sometimes it makes my head spin.

One name I keep coming across, an early titan of science fiction, is E.E. “Doc” Smith. I’ve not read much about his stories or style (aside from “action-packed!), but wise men have observed the breadth of his influence in inspiring games like Traveller and paving the way for cultural behemoths like Star Wars. I believe someone last week went to far as to call him the progenitor of the space opera. 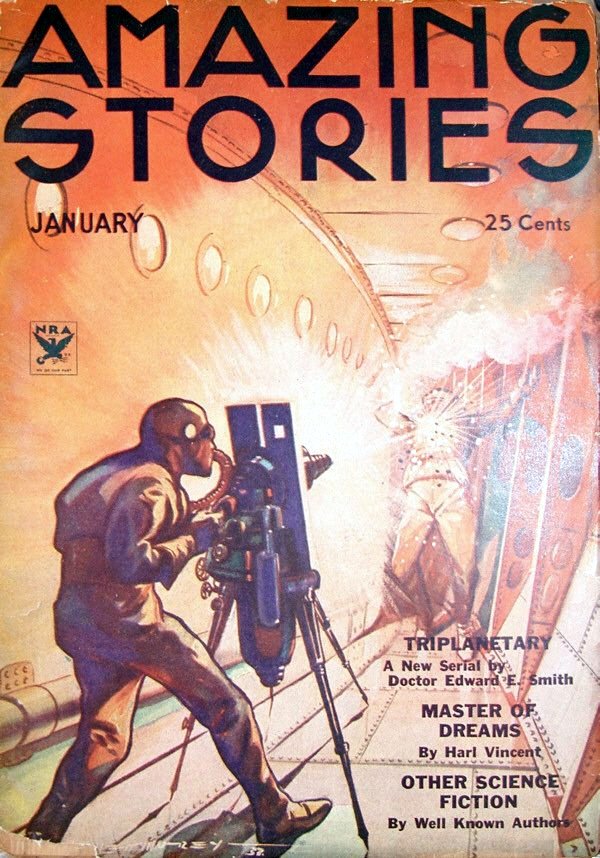 Well, I finally got around to reading Triplanetary, the first of his Lensman books. And I would recommend it as required reading for any serious fan of the genre.

Interestingly, the thing that struck me the most about Triplanetary was not its action (though it’s got plenty of that, for sure). It was Smith’s aliens. Maybe it was Brian Niemeier’s recent Geek Gab episode about nonhuman characters that had me focusing in on this, but I was struck by how interesting they were. The two “prime” alien races – the powerful and transphysical Eddorians and Arisians are mysterious and compelling in their own rights, but the amphibious Nevians, with their monstrous forms, strange technology, and inhuman rationality really drew me in. I finished the book wanting to know more about all three nonhuman peoples.

If you’re sick of elves and dwarves in space and giant alien bugs, the lifeforms of Triplanetary may cure what ails you. If you’re a fan of action – daring escapes, space armor, and ship battles, you’ll have fun. If you love stories of uber-competent men being men, you’ll enjoy this one.

I didn’t find the first Lensman installment to be a perfect work (for what is perfect?). Disbelief must need be suspended at certain points to advance the story. For instance, there was one part where our hero escapes with his woman and buddy, and as they realize they have no fuel, he produces a bootful of molten iron (which the escape vessel accepts to produce energy) with only the explanation that he pilfered it from their captors. Nevermind the fact that nowhere in the narration was such an opportunity overtly evident. Nor could I figure out how both his foot and the liquid iron were able to both occupy his boot. Still, it wasn’t story-breaking, so nothing to do but raise an eyebrow and move on. Thankfully I didn’t discover this kind of odd plot contrivance to be a common occurrence.

Triplanetary is just a small spoonful of Doc Smith’s medicine, and I’ll be glad to pick up with him at some point in the future. For now, with so much literary wealth to get to, all I can do is heartily recommend checking out his stuff.