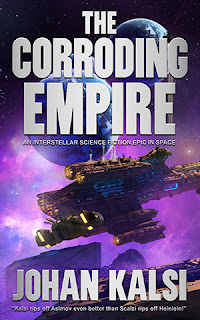 The first number produced by the extrapolated algorithm was off by one-ten billionth. There were nine zeros behind the decimal point. It was a tiny error, all but impossible to detect unless one was looking specifically for it.
The second number was off by twice that. Two in ten billion. Or, rather, one in five billion. One might more reasonably fear being struck by lightning. On a cloudless day. Indoors.
And yet, it didn’t matter. It wasn’t the size of the error that mattered so much as the fact that it existed at all. Somehow, Geist concluded, even though it was impossible, the data set must have become garbled. Garbage in, garbage out. He had run the extrap-algo more than a million times in the past month, using it to check and and re-check Orland’s agro-surveys. But there was no denying it. Somewhere, somehow, something had introduced an unknown variability into the process, but whether it was to be found in the data or the equations, he did not know.
He spoke in the direction of the softly glowing pseudo-door.
“Dr. Orland,” he said, “Got a minute?”
The door evaporated, revealing an attractive young woman in custom blue-green shimmering Chrysoletts, sitting with her feet up on her multi-tiered desk. She was reading something which, judged by the guilty expression that flashed across her face, had nothing to do with biogenics.
Her blond hair was uncharacteristically undone and hanging loosely about her face. She withdrew her feet from her desktop as she swept it back impatiently. “Sure, Tharry – hold on, will you, my band just broke.” She reached into her desk and withdrew a small, transparent bag containing what looked like a rainbow orgy of very skinny worms. She adroitly drew one out on a slender index finger that very nearly matched the scarlet of her long fingernail, while she reached back and gripped her hair at the back of her head with her other hand. She raised her outstretched finger to her other hand and the red band wriggled, more like a snake than the worm it resembled, into the clutch of hair she held behind her head. She let go as it automatically bound her hair into a loose tail.
“They say these things are unbreakable. Ha! If they were unbreakable, why do they sell them in bags of fifty? Anyhow, what sort of bug have you got up your bottom today, Tharry?”

“Your results,” he informed her, ignoring, as was his habit, her blithe disrespect for his senior position and impeccable reputation in the scientific community. “They’re not holding up. They’re actually getting worse.”
“How bad?”
“One in five billion.”
She smiled, amused. “That’s well within an acceptable margin of error.”
“That’s – uh – that’s really not what I was hoping to hear, Dr. Orland.”
She bit the left side of her lower lip and shrugged indifferently. “Alexander doesn’t see any problem with it.”
“Alexander wouldn’t. He doesn’t understand the mathematics involved or the potential implications of the error.”
“I don’t think you’re being fair to him!”
“It’s not a question of fairness, it is a question of this being something that is entirely outside his range of responsibility,” Geist pointed out. He elected to refrain from adding that it was also outside the range of the Senior Vice-President of Foundational Funding’s credentials, capacity, or competence. He didn’t know if Sele Orland and Alexander Lightman had a thing going, had once had a thing going, or were considering getting a thing going, and he didn’t want to know. But Orland was always quick to take the Senior Vice-President’s side, and, Geist had to admit, Lightman did have an excellent head of executive hair. “What did he suggest we do about it?”
“Nothing, really. He just said we should, sort of, you know, retract on the idea of pushing the notion of repeatability.”
“If it’s not repeatable, it isn’t science, Dr. Orland. Are you suggesting we sell it as art?”

THE CORRODING EMPIRE by Johan Kalsi is now available for preorder on Amazon.