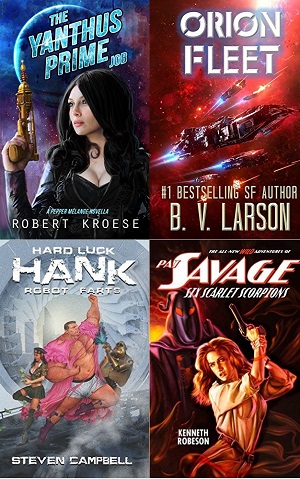 On Yanthus Prime, a femme fatale must turn cat burglar, teaming with an intelligent insect swarm to stay one step ahead of the Mob’s clutches. On Earth, a fighter pilot is kidnapped by an alien spaceship and forced to become an interstellar janissary. In a galaxy far away, a bulletproof thug tries to keep his space station running by skimming cargo from the ships that visit its docks. After eighty years, the cousin of one of pulp fiction’s giants gets her first adventure to call her own, surveying the oil fields of Depression Era Oklahoma in the hopes of striking it rich.

If a reader stayed within the four walls of the brick-and-mortar bookstores during this past autumn, he would have missed out on these adventures.  Fortunately, these stories, and thousands more from independent writers and small presses, are only a click away.  But with so many titles vying for attention, it can be easy to miss out on a fun read.

Here are five stories published between October and December 2016 that you might have missed. 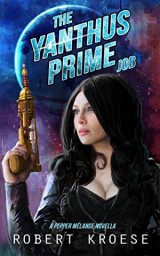 On Yanthus Prime, bartender Pepper Melange tries to keep one step ahead of both government investigations and the Ursa Minor Mob. But when the Mob’s fees grow exorbitant, Pepper must choose between becoming a rented courtesan, working as a mob-owned drudge, or returning to her old life as a cat burglar. Fortunately for Pepper’s freedom, the local museum is now home to the Emerald of Sobalt Prime, a legendary gem worth one hundred million credits to the right buyer. Teaming with a superintelligent insect swarm, her resulting caper would not be out of place in the adventures of gentlemen thieves like Raffles or Arsene Lupin (first or third), but adapts nicely to the aliens and advanced technology of Kroese’s Starship Grifters universe.

While Starship Grifters is written in the comedic adventure vein of The Hitchhiker’s Guide to the Galaxy and Retief!, The Yanthus Prime Job is played straight, sticking to the tropes of the heist. Although Pepper Melange has the name, svelte figure, and sharp tongue of a classic femme fatale, unlike a Catwoman or a Fujiko Mine, she relies on planning and technology instead of her wiles. As the heist unfolds, fate and chance wreak havoc on her plans. Watching Pepper adjust on the fly is a delight, as she relies on competence instead of chance or charm. Hopefully, The Yanthus Prime Job is the first of many Pepper Melange stories. 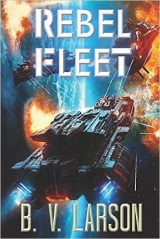 Long time readers of Larson might recognize the outline of Rebel Fleet from his earlier Star Force series. Strange ships fly through Earth’s skies, kidnapping people and subjecting them to barbaric tests to prove their worth as crew. The aliens capture the viewpoint character, who turns out to be a military genius on the level of a Caesar, who then loses friends and family to the lethal testing. He finally proves himself worthy of commanding a fighter-class ship by beating down all other candidates, and is enlisted into the losing side of a galactic war, where his tactical brilliance immediately puts him at odds with the leadership on his side. But as his successes grow, they yield more and more authority to him until he wins the war.

Thus is fighter jock Leo Blake thrust into the war between the Imperial Kher and the Rebel Kher. But while the Rebel Kher is content to wear down the Imperial Kher’s campaign until the Imperials abandon it out of boredom, Blake dreams of winning it outright. Through serendipitous circumstances, including the discovery of the Imperials’ complete ignorance of computer firewalls, he is able to destroy the Imperial invasion fleet. As a reward, he is returned to Earth and released from service. 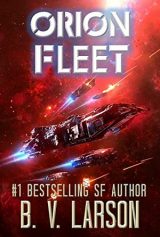 Orion Fleet opens as the Rebel Kher return to Earth, recalling Blake to service. This time, however, he is joined by the crew of Earth’s first starship, a submarine-like vessel known as a phaseship. Together, they must help the Rebels eliminate the new Imperial fleet, complete with a planet devouring Hunter, before it destroys the homeworld of Blake’s cat-man allies. The switch from fighter combat to submarine provides an extra layer of tension through the cat and mouse conflict of a sub and her hunters. This is also a welcome change from the Napoleonic War naval battles of many space operas. Instead of closing to close quarters with the enemy fleet, Blake uses decoys, spoofing, and other deceits found in submarine conflict to draw his opponents into and out of position during the space battles. More writers should consider delving into the meat of sub and signals warfare to flavor their space battles.

Despite the similarities to the Star Force series, the Rebel Fleet series stands as the stronger series. Star Force’s Kyle Riggs holds the twin roles of ground forces commander and lead weapons designer, locking him away from other characters. Rebel Fleet’s Leo Blake is thrust into the middle of the Rebel Kher’s force structure. In order to succeed, he must depend on his relationships with his human crew and the aliens comprise the Rebel Fleet. The action is still fast and furious, but Blake does not have to stop to make adjustments to the warfighting technology like Riggs does. Blake’s full attention is on his battles, and the Rebel Fleet series gives him plenty of battles, against friend and foe. The stronger characterizations and more focused fighting show Larson’s development as a writer since his Star Force days, and, like all his books, Rebel Fleet and Orion Fleet are page-turners that compel a reader to buy the next in the series. 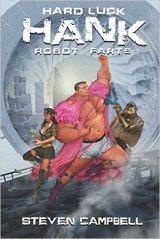 As a series, Hard Luck Hank reads like a deep space version of the Dresden Files, complete with hard-boiled adventures centered on a single city. Unlike Harry Dresden, Hank is mere hired muscle who has been promoted to the rank of fixer by the sole virtue that he is essentially unkillable. It certainly is not for Hank’s wit; it is a mercy that his catchphrase, “Eat suck, suckface!” is used sparingly. Fortunately, Campbell has a defter touch with his humor than Hank. As the one person everyone in the underworld is forced to trust (since it’s too much trouble to kill him), Hank must navigate the maze of problems besetting the illegal space station of Belvaille, from petty criminal squabbles to galactic wars, muddling through his adventures through determined self-interest, luck, his ever-growing bulk of scar tissue, and help from his more talented friends. As a reward, Hank’s fortunes follow the rises and falls of Belvaille from criminal backwater to galaxy capital and back. Despite Hank’s crude nature, Steven Campbell weaves a dense web of cause and effect throughout the six book series. The answer to why anything happens to and around Hank is never “Just because.” Even seemingly throwaway references have a tendency to become plot points.

In Robot Farts, Hank finds himself in the middle of one of Belvaille’s periodic downturns. For the space station to survive in the midst of a runaway bureaucracy that’s strangling trade, it must return its old traditions of corruption, skimming needed supplies from the shipments in its spaceport. While Hank sets up the framework for the Skim between Belvaille’s underworld, the merchantmen flying through, and the squeaky-clean but heavily bureaucratic navy, he must also deal with the mysterious hacking of a robot civilization’s homeworld, the crime spree from a rebel cell of his alien brothers, and the growing drumbeat of war. As usual, Hank gets completely over his head, usually because his methods hurl him into the crossfire – as a bullet sponge. Hank might be a meathead, but his adventures are a guilty pleasure. 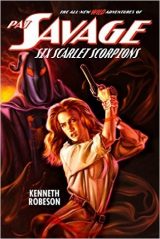 The cousin of pulp icon Doc Savage gets her own adventure as she tries to strike it rich in the oil fields of Oklahoma. Accompanied by Monk Mayfair, an industrial chemist built like a gorilla, Patricia Savage must dodge competing oil barons, Ozark gangs dressed as dime store Scorpion Tribe Indians, vinegarroon whip scorpions, strange paralyzing illnesses, and the police as she tries to clear her name of murder. While the modelesque Pat and the simian Monk together form a Beauty and the Beast pair, there is no romance in this relationship. Instead, Pat acts as an adventurous younger sister to Doc Savage’s associate, a woman of adventure who can shoot, bluff, and sneak just as well as the boys. Fisticuffs and feats of strength still remain Monk’s responsibility. This odd couple works, because both Pat and Monk have no problem yielding when their partner has more expertise in the situation.

While Six Scarlet Scorpions occasionally indulges in almost parodic instances of the alleged excesses of pulp’s “purple” prose, it also manages to make the oilfields of Oklahoma and acid-spraying whip scorpions as exotic as the darkest heart of Africa. The plot also follows the classic Lester Dent formula created by the first man to use the Kenneth Robeson house name, piling on twists and trouble onto Pat’s shoulders at every turn. With Doc Savage offstage, Pat and Monk get to grow out of their usual roles as his sidekicks, but 80 years of Doc Savage novels and comics keep them from developing beyond their long-established characterizations. Finally, while great pains were taken be historically accurate in the technology, the history, and the attitudes of the 1930s, the length of the Six Scarlet Scorpions follows the modern trend for longer books. At twice the length of a classic Doc Savage pulp, Six Scarlet Scorpions, while just as intricately plotted as the classic pulps, loses the brisk pacing of the same stories it emulates. At a shorter length, Pat Savage’s adventure would sizzle; instead, it is a slow burn.