Pre-Flood Giants, superhero brawlers, and Monster Hunters fight it out in this week’s fantasy and adventure new releases. 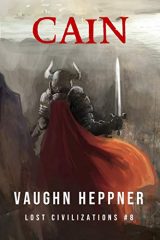 Fallen angels came to earth seeking the most beautiful women, having children by them, the Nephilim. The fallen angels left, but their demonic offspring remained, thirsting to conquer the Pre-Cataclysmic World so they could rule as gods.

One of the most oppressive is Gog the Oracle, a pitiless monster. He has gathered his galleys and enforcers to crush those who have risen up to resist him. He also seeks Cain, the deadliest swordsman in existence, the first murderer and ageless wanderer. Cain will be his hidden blade to strike at his enemies.

Lod leads those who have thrown off their Nephilim shackles. He has vowed to break into Gog’s swamp-city and end the creature’s reign of terror.

Now the hour of retribution is at hand as Gog’s enforcers sharpen their swords and as men train mammoths for the battlefield. Now the plans of demon and human clash head on, winner take all. 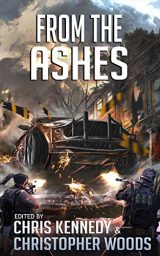 From the Ashes – edited by Chris Kennedy and Christopher Woods

In the late 2020’s and early 30’s corporations managed to render the major governments of the world obsolete. The big corporations owned most of the territories as well as the majority of the world’s wealth. While many of the old traditions were still observed in various parts of the world, the true power was with the corporations.

In the late 30’s, what would be known as the Corporate Wars began as larger companies initiated hostile takeovers in a whole new fashion. Employees, armed with corporate weapons, warred for dominance. It was a bloody time, and many small corporations were destroyed, as were a lot of civilians in the wrong place at the wrong time…as well as those who’d been buying the wrong products.

Sixteen outstanding authors have come to this Fallen World with stories that take place from the islands off the coast of Washington to the plains of central Europe; from the swamps of Florida to the streets of Philadelphia. These stories document the fall…and introduce you to people who might just drag civilization back from the ashes… 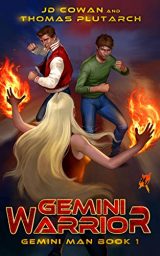 The night shift at a science lab sounds like the break Matthew White has been waiting for. A steady paycheck. A simple job. Absolutely no contact with another human being.

But Matthew gets more than he bargained for when he accepts a different position with the company. A job that is highly paid – and highly bizarre. He is plunged into the terrible machinations of his new boss, Mrs. Stohl, and a sullen teenaged boy named Jason is along for the ride. The fact that Jason is practically his twin only makes it all creepier.

Dragged through a mirror into an alien dimension, Matthew is in way over his head. He should have known the job was too good to be true. To escape, Matthew and Jason must brave the wilds of this new universe and learn to control their new powers.

And hardest of all, Matthew must learn to be a hero.

Will they escape Mrs. Stohl’s terrible plans for them? Can they make it home to their world, or will they be trapped in the mirror dimension forever? 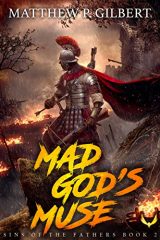 The fate of the world rests on his shoulders. Will he crumble?

Ahmed’s faith is strong, and so is his sword-arm, but as for details, those were for his fallen master. Now, he must somehow rise to the task of leading his men and, by Ilaweh’s grace, thwart the Dead God’s apocalyptic prophecy.

But how can he command hardened veterans of war, men with much blood on their hands, when he has accomplished so little in his young life?

If Ahmed can earn their respect, there might still be time to do as his master had hoped–ally with the sorcerers of Nihlos. They are dangerously unpredictable and capricious, perhaps even mad, but their power is undeniable.

Ahmed will need that power. For he knows something even his master never guessed: their ultimate destination is the true heart of darkness. An ancient city of evil and death that none survive. 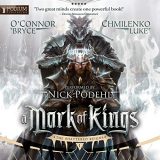 Despite his youth, Declan Idrys knows of the evils of the world. He knows of the bastards and brigands who plague the King’s lands, of the monsters skulking in the wooded depths of the realm. Together with his companion, Ryn – a beast of rather peculiar talent – he has spent the last decade of his life beneath the bloody banners of a half-dozen mercenary guilds, hunting precisely such festering wickedness within the borders of Viridian.

Unfortunately, fate is quick to pull on the leash of its favorite children. When one particularly troubling contract goes sideways, Declan and Ryn find themselves thrust into a war thought legend and long-ended, a conflict so old it is synonymous with a time in which dragons still ruled the western skies. Now, as dead men rise from their graves and the terrible beasts of the northern ranges descend into the kingdom with an appetite for savagery and flesh, Declan is faced with a profane choice. He can turn, can flee an ancient rising horror that would see the realms of man left as shattered death and wind-blown ash.

Or, Declan can face this mounting threat, can come to terms with the fact that his oldest friend might just be more than he appears, and learn to wield an ageless power all his own.

Centuries pass, after all, but the Blood of Kings does not fade…. 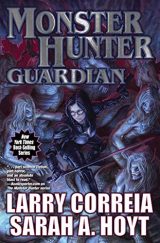 When Owen Pitt and the rest of the Monster Hunter International crew are called away to mount a month’s-long rescue mission in a monster-infested nightmare dimension, Julie Shackleford—Owen’s wife and descendant of MHI founder Bubba Shackleford—is left behind. Her task: hold down the fort and take care of her new baby son Ray. Julie’s devoted to the little guy, but the slow pace of office work and maternity leave are starting to get to her. But when a routine field call brings her face-to-face with an unspeakable evil calling itself Brother Death, she’ll get more excitement than she ever hoped for.

Julie is the Guardian of a powerful ancient artifact known as the Kamaresh Yar, and Brother Death wants it. In the wrong hands, it could destroy reality as we know it. Julie would die before giving it up.

Then Ray goes missing, taken by Brother Death. The price for his safe return: the Kamaresh Yar. If Julie doesn’t hand over the artifact it means death—or worse—for baby Ray. With no other choice left to her, Julie agrees to Brother Death’s demands. But when you’re dealing with an ancient evil, the devil is in the details.

To reclaim her son, Julie Shackleford will have to fight her way through necromantic death cults, child-stealing monsters, and worse. And she’ll have to do it all before Brother Death can unleash the Kamaresh Yar.

It’s one woman against an army of monsters. But Julie Shackleford is no ordinary woman—she’s one tough mother! 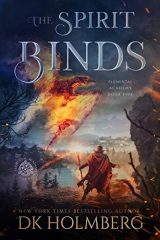 The Inquisitors have been stopped, but the one who leads them remains at large.

Tolan discovers a dangerous plot against the Academy—and all of Terndahl—the Inquisitors have planned for far longer than any have suspected. The power involved is unlike anything ever encountered by those within the Academy. Tolan isn’t sure he’s capable of understanding what has happened, but with his connection to the elementals, he might be the only one able.

The key to what’s happening is tied to something in Tolan’s past. For him to stop the one who leads the Inquisitors, and to understand what they’re after, requires him to know more about where he came from and why his parents left him in Ephra.

Stopping the Inquisitors is only the beginning, not only for Tolan to save Terndahl, but to finally know himself. 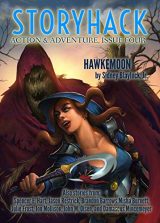 College-age Frank Mason accompanies his father to the private island of a reclusive billionaire and his lovely, yet lonely daughter. When armed men storm the house, what can they do to rescue their fathers?

In a future world two men fight a duel in the ruins under the city. The rules are simple–two men enter the tunnel, one man leaves.

A young werewolf, an abusive alpha, and a new pack–in space.

Trapped in a life as muscle for a crime syndicate, Robert “Bomber” Robinson struggles to maintain his humanity during the second worst night of his life.

A retired military veteran settles down on a distant planet away from his old life only to find that violence is a universal trait. Old habits resurface as he is forced to step up and defend his neighbors.