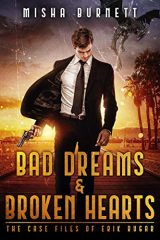 It’s hard to fight wizards and demons when all you have is a gun and a badge.

The use of magic in the Sovereign City of Dracoheim is regulated by the Lord Mayor’s Committee For Public Safety. From the licensing of magi, to the health and safety requirements for magical manufacturing, to the import and export of goods to the Realms of Nightmare, dedicated civil servants ensure that the metropolitan area stays safe from magical mayhem.

Most of the time, anyway.

My name is Erik Rugar. I’m an agent of the Criminal Investigation Division of CPS. We operate outside of the authority of Parliament and are answerable only to the Lord Mayor himself. We get involved when the regular beat cops are out of their depth. If a magic shop gets robbed by junkies, or someone gets vaporized by a fireball, or shapechanging creatures start infiltrating the city, I get the call.

But I’m not a mage; I’m just a cop. I face down magical threats with my keen investigative skills and a trusty revolver.

Welcome to my world. 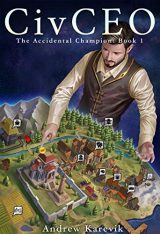 When Charles Morris is forced into retirement, the old multinational company CEO has to accept that it is all over. The days of running his financial empire have finally come to an end.  While Charles is attending a fundraiser, however, something happens and he’s transported into a strange medieval world where magic is real and legendary heroes coexist with mythical monsters.

As it turns out, he’s been snatched by a goddess who was in need of a Champion to grow her village.

Relying on a lifetime of business expertise and the Topsight—an ability that allows him to see and manage the entire village from above—he will have to start back from the bottom and find how to bring this measly Level 1 village to prosperity.

And so, they give him an ultimatum: he has one month to prove himself and improve Tine, otherwise it’s the hangman’s noose. 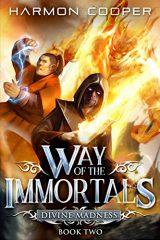 Things are only starting to heat up for Nick Barnette.

Upon escaping the city of Nagchu, Nick and his companions barely manage to survive a surprise attack from an incredibly powerful being, one clearly not of their world.

And that isn’t the only thing after them.

With Lhandon’s monastery under siege, Nick’s group must head toward the Darkhan Mountains, to the snow lion village of Dornod, in search of training and to officially reset of the Path of the Divine. Through meditation, combat, and study, Nick and his companions continue to cultivate their powers while in the village of Dornod. Their ultimate goal is to reach the Island Kingdom of Jonang, where Nick hopes to find his Marine friend Hugo, and Lhandon hopes to locate the reincarnation of the Exonerated One.

But their enemies are also growing stronger.

And it is through sheer treachery that Nick and Lhandon find themselves in a life or death situation, one that could end their epic saga before it has a chance to even start. 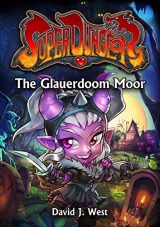 The evil Baron Von Drakk has no problem defeating an entire army and kidnapping their leader—the great Princess Citrine. Now Princess Citrine’s only hope lies in a thief that just got caught.

Sai doesn’t want to be a hero. She wants to steal the greatest jewel in Crystalia. But when she is captured by the king’s men in the perfect trap, Sai is forced to take a job from King Jasper himself—to rescue his daughter Princess Citrine from the evil Von Drakk. Escape should be easy for an accomplished thief, but the Royal Warden refuses to let her out of his sight until they find the kidnapped princess.

Sai thrives in the unsavory places of Castletown, but those pale in comparison to the Glauerdoom Moor. Witches and zombies lurk around every corner, and the swamp itself seems against them. Even worse is the tyrant who rules the Moor. The undead Baron Von Drakk has a host of evil creatures at his command, not to mention nearly unstoppable dark magic of his own.

How can Sai defeat someone who took out an entire army? 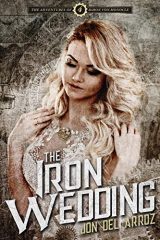 She must marry an evil tyrant…

…in order to end the war.

Zaira von Monocle is on the verge of sacrificing her life as an airship commander, because the ruler of Wyranth Empire demands her as a bride.

The war has devastated Zaira’s home country, leaving her little choice but to do as the Iron Emperor wishes. But a new threat looms over the horizon as she tries to bring about peace between these two warring countries, one which neither the Wyranth nor Rislandia are prepared to encounter. 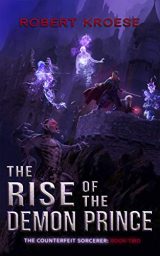 A terrifying demon has come from the shadow world to threaten the land of Orszag. Flanked by a horde of ghostly specters, the demon intends to lay waste to the city of Nagyvaros, and only one man can stop him: Konrad the sorcerer. To defeat the demon, Konrad must learn to master the power of the warlock’s brand. But with enemies all around him and no time to lose, Konrad finds himself playing one foe against another in a desperate attempt to stay alive, hoping one day to wreak his vengeance on the man who destroyed his life….

THE RISE OF THE DEMON PRINCE is the second book in the five-book series THE COUNTERFEIT SORCERER. 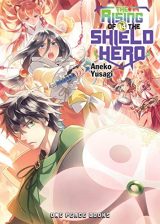 The Rising of the Shield Hero 14 – Aneko Yusagi

The Heavenly Emperor of Q’ten Lo is after Raphtalia’s life! To ensure her saftey, Naofumi must team up with the country’s revolutionaries to overthrow him! But when they go about fixing the problems of the country’s misrule, it drives the emperor even further into a corner. Nevertheless, Naofumi decides to add fuel to the fire by capturing the country’s former capital! But he learns that someone is pulling the strings from behind the curtain.

“Whatever. Our only choice is to keep pushing forward. There’s no stopping now.”

Just before Naofumi’s party reaches the former capital, they come face to face with the emperor’s ultimate line of defense: Sadeena’s sister?! Faced with Q’ten Lo thrown into chaos by family feuds, what will Naofumi do?! Lead its people to revolution!? Join the battle in volume fourteen of this otherworldly revenge fantasy! 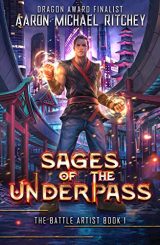 In a world where everyone has power, Nikodemus Kowalczyk was always destined to be an underdog.

Nikko has long since given up on his dreams of being a world class Battle Artist. Thanks to his damaged core and crazy family, he never stood a chance anyway. With money, fame, and untold power on the line, the corporations decide who wins. End of story.

But when a mysterious group, calling themselves the Sages of the Underpass, threaten to upend the entire system with their unorthodox training and cultivation methods, Nikko soon learns that what was once a handicap might be his greatest asset. The only thing standing in his way is a bitter, hard-hearted veteran, who would like nothing more than to see Niko stay in his place. Right at the bottom.