Living dungeons, vengeful spies, and a Marine turned into a god feature in this week’s collection of the newest releases in fantasy. 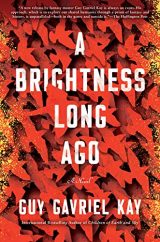 In a chamber overlooking the nighttime waterways of a maritime city, a man looks back on his youth and the people who shaped his life. Danio Cerra’s intelligence won him entry to a renowned school even though he was only the son of a tailor. He took service at the court of a ruling count—and soon learned why that man was known as the Beast.

Danio’s fate changed the moment he saw and recognized Adria Ripoli as she entered the count’s chambers one autumn night—intending to kill. Born to power, Adria had chosen, instead of a life of comfort, one of danger—and freedom. Which is how she encounters Danio in a perilous time and place.

Vivid figures share the unfolding story. Among them: a healer determined to defy her expected lot; a charming, frivolous son of immense wealth; a powerful religious leader more decadent than devout; and, affecting all these lives and many more, two larger-than-life mercenary commanders, lifelong adversaries, whose rivalry puts a world in the balance. 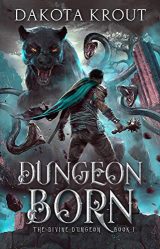 Conquering dungeons and using them to grow has long been the most efficient way to become a powerful adventurer. The only thing keeping the process from being easy is the Beasts that inhabit these places. Questions plague those entering this particular place of power: Where do the ‘rewards’ of weapons, armor, and heavy gold coins come from? Why is a fluffy bunny charging at me? For abyss-sake, why are there so many monsters?

Cal has all of the answers to these age-old questions for a very simple reason. He is a Dungeon Core, a soul forced against his will into a magical stone. With the help of an energetic friend, Cal grows a dungeon around himself to bring in new sources of power.

When a threat he doesn’t fully comprehend bares its many teeth, Cal is determined to survive the attempt on his life. Unfortunately for adventurers, the only way for him to achieve his goal is to eat anyone that enters his depths. 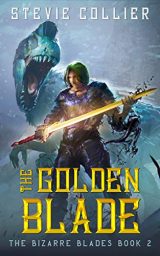 A sword with a mind of its own. A hero in over his head. Can he find a mythical blade in time to save his father?

Finn Featherstone never thought that owning a Bizarre Blade would cause this much trouble. After barely controlling his stubborn weapon long enough to rescue his fellow Champions, he’s unsure if his dream of glory is worth the challenge. But when a tyrannical king vows to hunt the hero down, Finn never imagined the enemy would kidnap his father.

With an execution looming, Finn vows to find the fabled Golden Blade to rescue his family. But it’ll take more than courage to survive pirate-infested waters, angry cyclopes, and gargantuan dinosaurs. And if he and his crew somehow make it to their destination alive, he’ll still have to solve a ancient and deadly trial to prove his worth.

Can Finn find the inner strength to retrieve the blade and defeat a vicious king? 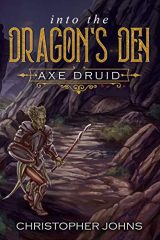 Zeke and his comrades have only been in their new world – Brindolla – for a short time, but every minute has been amazing. Kicking butt and not bothering to take names, the group has been moving forward in their quest to push back the galactic tyrant, War.

Then the unthinkable happens; their friend is banished to the darkest Hells. Poof. Gone, just like that. Now, not only are they on a quest to stop the vanguard of War, but they are going to need to get stronger, faster, and better than ever if they want to have any hope of busting into the Hells and getting their friend back. The Brindollan Gods plan to help as much as they can, but will it be enough to allow them to complete a task that even Orpheus couldn’t in Earth’s mythology?

With the odds looking bleak, and the world they’re trying to defend turning on them, they’re going to need to seek help from unlikely spaces, travel to new places, and break some faces. 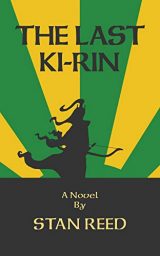 Four disparate souls thrown together by an uncaring fate in a war-torn Empire.

Ronin, his family slain at the order of the shogun, seeks revenge since there is no justice. Rei, the super spy, is fettered into inaction because she will not allow innocents to suffer. Kanjin, lost to her great love, has entered the chaos of the realm and hopes to use it to reclaim that love. Yuku, in the midst of madness, seeks to throw down the gods themselves.

Behind it all, the shogun crushes the provinces of Old Nippon into the grist out of which he will forge a unified nation, one that is strong enough to free itself from the shackles of The Emperor.

Join us for a tale of love and friendship, of treachery and revenge. Mostly revenge. 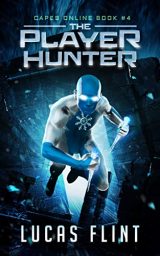 After escaping a top-secret government facility, Nyle Maxwell (Winter) has finally reunited with his long-lost girlfriend, who he rescued from the government. Unfortunately for him, however, his girlfriend doesn’t remember him or know how she even got into Capes Online in the first place.

Additionally, Winter and his team now find themselves in the Underworld, a hidden world located far below the surface of Adventure City. The Underworld is dominated by the vicious and deadly Dwellers, a race of lizard people with an innate hostility toward all humans, Hero and Villain alike. With the recent theft of their queen’s precious crown at the hands of a human thief, the Dwellers are threatening to invade the surface and drag all of humanity into a devastating war no one will win. 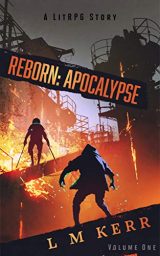 If you could turn back the clock and fix all the mistakes you ever made, would you? Micheal’s answer to that question would be quite simple.

Humanity has fallen, killed by stronger races of beings after being warped away to a new reality, the mystical 7 Layers.

Humanity’s goal had been simple. Make it through all 7 Layers and reach Heaven. Humanity failed. Humanity died.

Micheal Care’s memories have been transported back into his past self thanks to a magical Artifact he found by chance.

He is no chosen savior. He is no divinely picked hero. Can he change the future? Can he catch up to the mightiest warriors of humanity and surpass them? 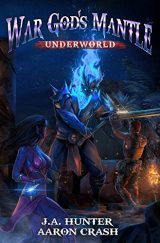 A Marine turned Greek God. An Army of Beautiful Amazons. One Final Battle against Death Itself.

Jacob Merely has secured the ultimate weapon against evil, the Crystal Scythe, and now it’s time for him to bring the fight to Hades himself.

Unfortunately, Earl Necro Earl and his undead forces stand in the way, so if Jacob is going to defeat the god of death, he’s going to have to take out Earl first. Knocking Earl’s teeth into the back of his throat? Yeah, Jacob is totally okay with that.

And when a mysterious new woman arrives unexpectedly at their gates with no memory of who she is—but seems to know of a secret passageway into the heart of the Temple of Hades—Jacob finally has the last piece of the puzzle. But with every new battle won, Jacob is tempted to give into the rage and arrogance that consumed Ares.

Can Jacob resist the temptation to become a total douchebag? Can he and his Amazons unravel the mystery behind the ancient Olympian War and finish a battle as old as time itself? And what new demons does Hades have to throw against the War God?