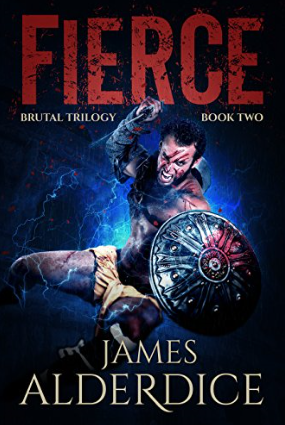 What If Maximus Got Thrown Into The Aztec Sacrificial Game Instead of the Coliseum?

The second book in the Brutal Trilogy, James Alderdice returns with to the troubled reign of King Gathelaus with Fierce.  The first novel in the trilogy, Brutal, was reviewed here on this very blog last August.  This review necessarily contains spoilers for the first novel, so if you’re the type to react volubly at spoilers for novels over a year old, first let me congratulate you on your posh and generally trouble free life, and second let me warn you to proceed with extreme caution.

James Alderdice writes with a sparse and smooth language that lends weight to the action, and speed things along allowing this tale to progress at a furious pace that ends much sooner than the 450 page length suggests.  If you’re a reader who prefers action and plot over characterization and navel-gazing, then Fierce won’t disappoint.  Given the sudden jump in setting between Books One and Two, and the episodic nature of the (so far) duology, you can even read this book first without missing a beat.

The crown rests heavy on a barbarian brow plagued with justified worry about the loyalty of the deposed king Forlock’s advisors.  With good reason, as it turns out.  No sooner does the story begin that the man who cleared out the viper’s nest of All-death faces yet another challenge to his rule in the form of assassins hired by Vikarskeid, the nephew of the previous king.  Rather than wait to have the throne taken from him by violent means, Gathelaus uses his throne as a means of violence by throwing it at the assassins, crushing one and buying himself enough time to respond with more traditional methods of defense.  So begins a long journey from the capital of the northern kingdom of Vjorn to the fetid jungles of Tultecacan.

While Gathelaus might have been man enough to survive the attentions of thirty-two assassins, even a barbarian king has his limits, and Vikarskeid finally finds that limit when he taps into an ancient and dark power.  The results of his pact see Gathelaus bound in chains and bounced around the sea from one pirate vessel to another before the storms of fate – literal storms in this case – throw him ashore on a lost continent, and that’s when the real meat of the story begins.

Like all great lost continent stories, Fierce throws its protagonist into a strange land home to strange people complete with exotic beauties that may or may not be trusted. He must find a way to fight his way out of the slave pits, into the political wrangling of the ruling Empire, and survive threats from friend and foe alike.

As with the first book in the series, Alderdice throws a ferocious warrior into a corrupt civilization and lets things play out as they are wont to do.  Alone against the world, Gathelaus makes for a heroic protagonist, though one a little more bloody minded than the Boy Scouts typically seen in these sorts of adventures.  He has no qualms about torture or betrayals if those actions advance his goals.  As with the first book, the overarching goal – get back to Vjorn to reclaim his broken throne and crown – can only be reached through a successively more dangerous and higher stakes series of obstacles.  In this case, Gathelaus does have a few allies searching for their lost king, and this provides the narrative with a tighter focus even as it expands the scope of the world in which the Brutal Trilogy takes place.

Given that this series is marketed as a trilogy, it feels a little cheap to complain about set-ups with no pay-off, but for those preferring a “one and done” experience, you won’t find it here.  As with Fierce, Alderdice throws in a few set-pieces, and in the latter case it is a demonic temple overthrown and a minotaur cult on the lookout for vengeance that springs to mind, that don’t have resolutions even as the last page ends.  They represent great set-ups for the third book, but at this point it will take some work to wrap them all up.   I’ll be there when Alderdice publishes the final chapter, and hope you’ll come along with the Castalia House blog for the ride.