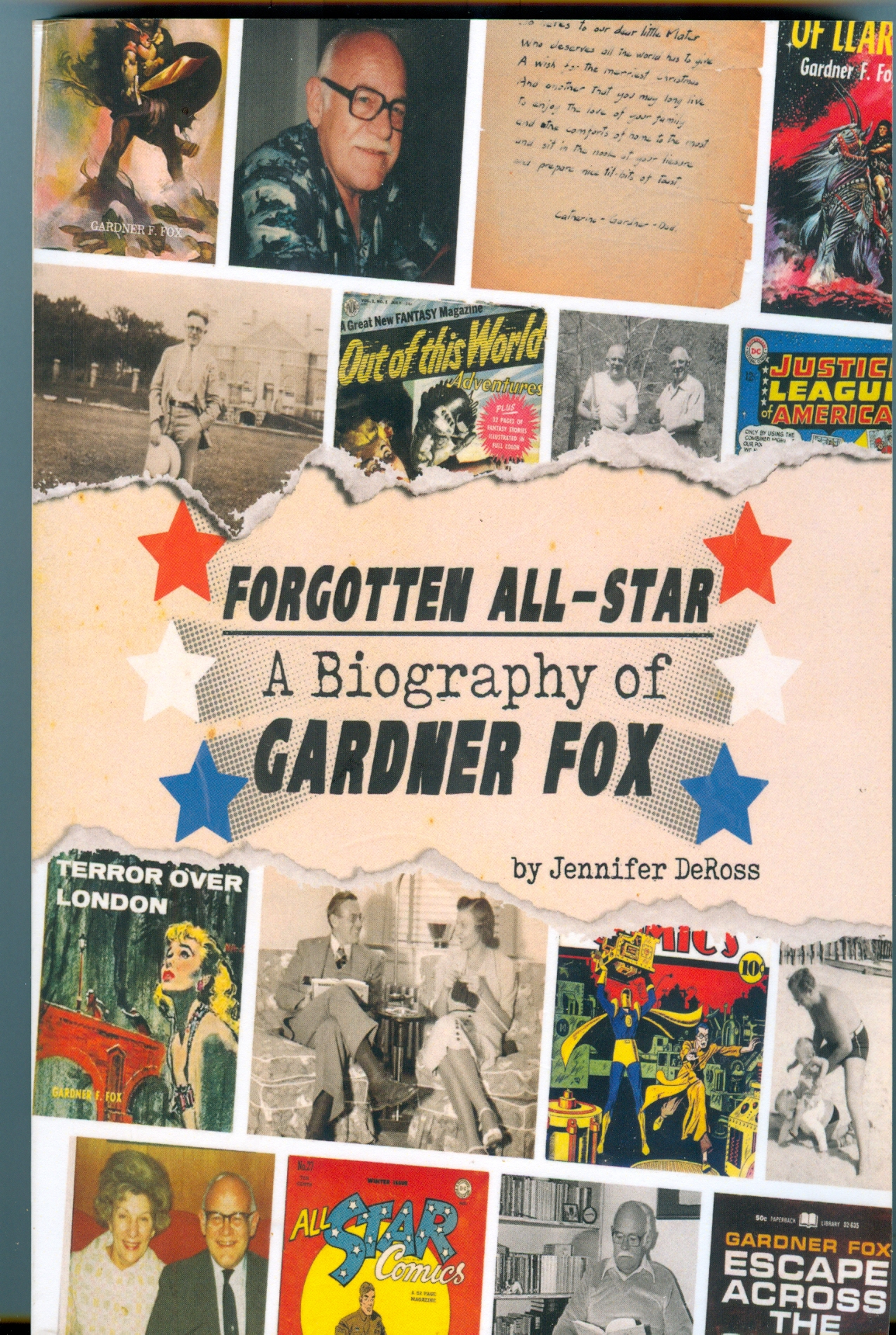 Gardner Fox has been a guilty pleasure for over 30 years. I first read of him in Michael Franklin, Beth Meachem, & Baird Searles’ A Reader’s Guide to Fantasy (Avon Books, 1982) that mentioned Kothar and also that Fox had written for Planet Stories. A couple of years later, I picked up a used copy of Fox’s Kothar and the Wizard Slayer. The book was a quick read but sandwiched between meatier fare, so Fox did not make an immediate impact on me.

Donald B. Day’s Index to the Science-Fiction Magazines (1926-1950) was a valuable reference item that I found in two different university libraries. I used to look at page after page of author entries with intriguing story titles from the pulp era. I remember coming across Gardner F. Fox with story titles such as “Sword of the Seven Sons,” “Man the Sun Gods Made,” and “Werwile of the Crystal Crypt.” Those story titles intrigued me to say the least. Not long after, I found his Escape Across the Cosmos which I enjoyed.

I finally got to read one of Fox’s pulp stories, “Tonight the Stars Revolt!”

reprinted in Brian Aldiss’ Galactic Empires. I thought the story to be hyper-adrenaline driven. Somewhere along the way, I found out about Fox as a comic book writer.

In the early 1990s, I tracked down all of Fox’s science fiction and weird stories in pulp magazines including Planet, Weird Tales, Amazing Stories, and Marvel Science Stories. My description of Fox is his pulp stories read like a cross between Edmond Hamilton and Robert E. Howard with a few Lovecraft references thrown in.

I also started picking Fox’s historical novels and recently had an article in Men of Violence on those. In 2006, I talked with Roy Thomas. What did I talk about? Gardner Fox. Roy said that probably the most exciting thing that Fox did every day was going to the mail box.

Out of the blue, there is a biography of Gardner Fox. Forgotten All-Star is a trade paperback that runs 221 pages including end notes. Author Jennifer DeRoss is described as an “instructional specialist at Lane Community College, co-founder of the website Sirens of Sequentials, and has previously written pieces on Swamp Thing, Buffy the Vampire Slayer, Orphan Black, and Bitch Planet.”

Most authors live rather ordinary lives. The most interesting writer I can think of with an interesting biography would be Barry Sadler, the guy who wrote the Casca books. A biography then by necessity shifts to analysis of the writing. That can be very interesting if done right. 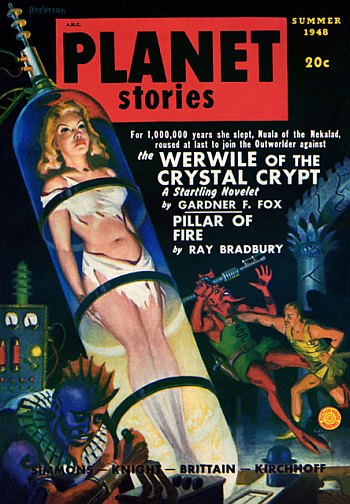 I learned some things about Fox. He fenced in college so knew his swordsmanship. He was a devout Catholic. He tried to join the Army for WW2 but rejected due to poor eyesight.

The book has primary emphasis on his comic book writing. DeRoss covers how he got into writing for comic books. He was working as a lawyer but just not enough of a bastard to be a good one. He created The Flash, Hawkman, the Justice Society of America, Doctor Fate and others. He worked on Batman, Dr. Strange, Adam Strange, and many, many others.

DeRoss devotes a whole chapter to Wonder Woman. Apparently, Fox has received flack for making Wonder Woman the secretary for the Justice Society of America. She does a survey of some of Fox’s scripts for the character making the case he was not some Neanderthal sexist. I knew nothing about William Moulton Marston, the guy who created Wonder Woman. Marston was a writer on mental health for magazines and a comic book critic. He was invited by M. C. Gaines to create a female character.  He had the idea that:

“Most men secretly wanted to be dominated by women, who are capable of enjoying both a dominant and submissive role with either men or women.”

Marston put bondage as a common motif in his writing of Wonder Woman. Kinky stuff.

DeRoss covers the implosion of super hero comic books after WW2, then the reaction to comics in the early 1950s resulting in the comics code. She devotes a chapter to the rise of Marvel Comics in the 1960s and the beginning of comic book fandom.

Fox was one of five writers fired by D. C. Comics in 1968 for asking for health insurance and pension plans. I would have liked to have known more details about the “writer’s strike.” I have heard bits and pieces about it over the years. Fox also had a stroke in late 1968. 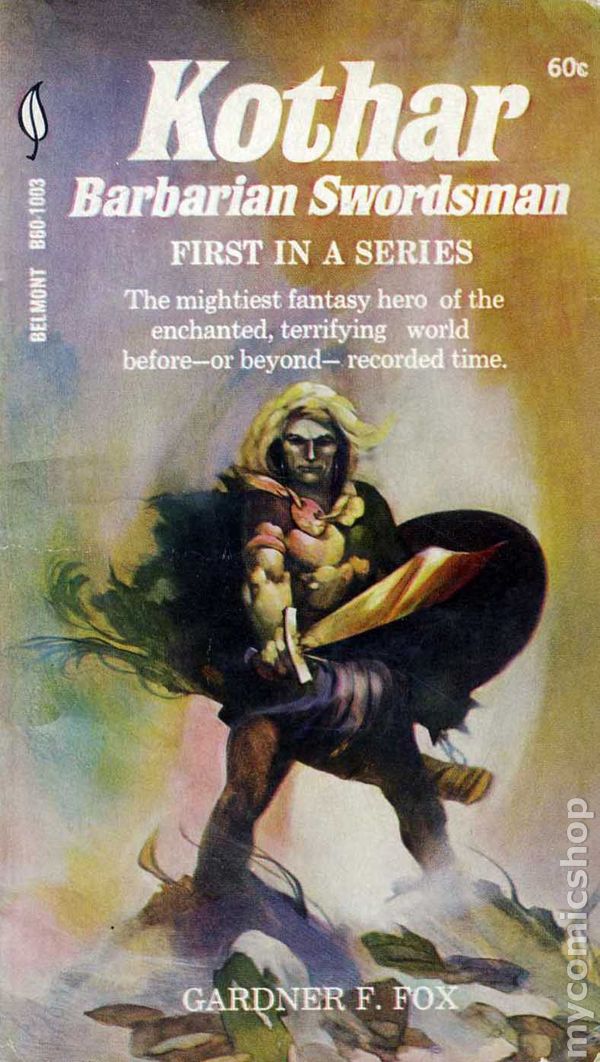 Attention is given to his Kothar and Kyrik paperback series with some analysis of words used and in regards the hero’s journey. Gardner Fox died from pneumonia suddenly Christmas Eve, 1986. I remember reading about it, maybe in Locus and feeling sad. I was thinking of writing to him.

So, this biography is heavily weighted on the comic book side of Fox’s career. My interest is in the pulp fictioneer and Appendix N side. His first story in Weird Tales in 1944 is mentioned but almost nothing about his pulp career. Fox wrote sports and western stories in addition to science fiction and weird. His paperback career is also glossed over. Fox had a steady number of science fiction paperbacks from 1962-1967 in addition to his historical novels.

I learned some things about Gardner Fox. The middle initial “F” was for Francis, his confirmation name. His middle name was Cooper. He seems to have been a real solid guy that I probably would have enjoyed talking with.

I do have a few quibbles. The DeRoss’ academic side is reined in for the biography, but it does seep through now and then:

“Despite’s Fox’s dismissal of a privileged lifestyle, he most certainly lived such a privileged life right from the start. These forms of privilege prompted Fox’s interest and gave him the ability to follow his passions and share them with the world.”

“Privilege” is a word in fashion these days. It is also a word that should be used sparingly and narrowly. Gardner Fox’s father was an electrical engineer who worked his way as up vice president of engineering for AT&T. Is it privilege to use knowledge and discipline to get an education and then take care of your family? I don’t see a special right, advantage, or favor granted to Gardner Fox in his upbringing. Privilege is your father, using his status to reinstate you to Harvard after being expelled for cheating.

I have thought for years there should have been a Best of Gardner Fox paperback ranging from his pulp days to his last stories in Dragon magazine. There would have been a built-in audience knowing him from his comic book work.

Hopefully, this biography will raise Fox’s profile in the realm of popular culture.