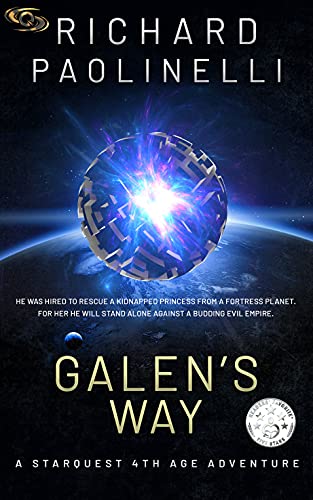 In the far future, many millions of years after a desperate humanity transported the last traces of life out of the Milky Way to Andromeda, humanity is flourishing in its new home. But politics abound as star kings plot against a weak galactic president, and four princesses fall prey to kidnappers.

When formal military action means death and revolution, subtler means must be found. The father of one of the princesses sends an agent to find Galen Dwyn, a mercenary of some renown in the disreputable underworld. Offered a small fortune and an opportunity for revenge, Galen sets out to rescue the kidnapped star princess.

Soon, Galen finds himself ensnared in a web of intrigue that seeks to kill him, the princesses, and a sizeable portion of the galaxy through war. Faced with an entire galaxy pursing him, Galen could find a nice asteroid in a remote system to spend a pleasant life with the princess he’s wooed.

But that’s not Galen’s way.

Galen’s Way, by Richard Paolinelli, is the first story in a the Starquest universe, a shared setting created by esteemed science fiction writer John C. Wright, an avowed enthusiast of space princesses. As advertised, Galen’s Way is the first in a trilogy of series exploring humanity’s doomed last stand in what is known as the Murky Way and the impending return of that existential threat.

At a time when space opera grows more militarized, it is refreshing to see palace intrigues and other threats that cannot be solved with a blaster. Don’t get me wrong, Galen has plenty of chances to shine when push inevitably comes to shove. However, Galen’s actions are governed more by an understanding of the motives and wants of the people he’s fighting, and not by drilled responses, tactics, and muscle memory. This gives more purpose to his actions, as well as a thoughtfulness to the upstream path he swims through the various snares set by Princess Rhiannon’s father. Galen might not know everything that happens, nor might he always be in control, but he always has an objective he is actively working towards.

Unfortunately, there is only so much one man can do. There is a reason why most successful mercenary-minded spacers have a Yarol, Navi, Jayne, or Chewbacca at their backs. And while Rhiannon does compliment some of Galen’s skills, he often remains alone, without that second set of eyes to sound warning.

Galen’s Way is a shorter novel than is currently popular, leaving little time for the aggressive set pieces and exhaustive histories that clutter its contemporaries. Instead, it provides a quick, easy read that hits all the high points needed for the rescue, return, and romance of a space princess. Adventure is emphasized more than action, and that adventure spills over into romance. While Galen’s Way is more frank about desire than most science fiction books, it handles the romance with fades to black and discretion. But that frankness about desire also stretches into its villains, who are more developed in their wickedness without descending into cartoonishness or amoral bad-boy worship. After all, some folks are just evil, and not misunderstood.

As of the time of writing, a sequel, Galen’s Blade, is available. After all, Rhiannon’s rescue only dampened the spark of rebellion. And another, larger threat is darkening the night sky around the Murky Way…