Gatling: South of the Border 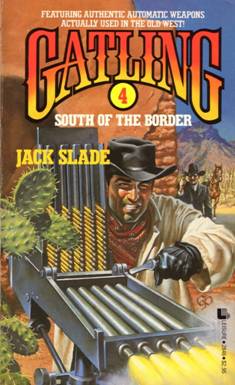 Original mass-market paperback books in its heyday is interesting. For the past two years, I have been learning some of that history belonging to a Men’s Paperback discussion group. Len Levison, Lou Cameron, Marvin Albert, Ralph Hayes, and Peter McCurtin are some of the writers from that period.

Peter McCurtin (1929-1997) was Irish born, transplanted to America where he was an editor at Tower-Leisure Book and writer. He wrote in crime, adventure, and western genres in the 1970s to early 1990s.

One series he wrote for Leisure Books in the late 1980s was “Gatling” under his “Jack Slade” pseudonym.  Six Gatling books came out in 1989 to 1990. Gatling is McCurtin’s take on the late 19th Century American adventurer series. Ben Haas’ (writing as John Benteen) “Fargo” was the probably the first and still the greatest as he adventures in the early 20th Century in various places. Lou Cameron wrote the Captain Gringo series. The idea is having an American soldier of fortune using new weapons in rough areas. Bolt action rifles, smokeless powder, the first automatic pistols, machine guns are generally part of the mix.

South of the Border takes place in 1888. Gatling works for Hiram Maxim and his company providing new weapons to try out. In this case, an engineer leads a surveying team across Panama to explore the idea of building a canal. It is Gatling’s job to provide fire power.

Author James Reasoner had said the Gatling series is very politically incorrect and is it ever!

“Gatling knew there wasn’t a Marine there that didn’t want to give her a good hosing.”

McCurtin has a creepy homo-sexual male secretary for the engineer and uses some very 1980s colloquial terms for homosexuals. The characters also use various derogatory ethnic and racial terms in dialogue. McCurtin’s terms for sex are funny.

The novel is classic men’s adventure paperback at around 70,000 words. There is some PG-13/ R rated sex and plenty of action. Gatling disposes of an assassin with on the ship to Panama. There is a firefight with some low-level criminal mercenaries, a fight with Indians, another bigger fight with the main mercenaries sent to kill them, and a fight with Panamanian rebels.

It all comes in at 170 pages. I still think the Fargo series is the one to beat but Gatling is fun. I will definitely pick up more if I see them in used bookstores. Men’s adventure paperbacks seems so far away now.