“In this life, victory does not always go to the righteous. It rains on the wicked and on the good. In fact, evil is strong, for many hands work against Elohim. The rebellion begun in the Celestial Realm is now carried out on Earth.”— Giants, by Vaughn Heppner 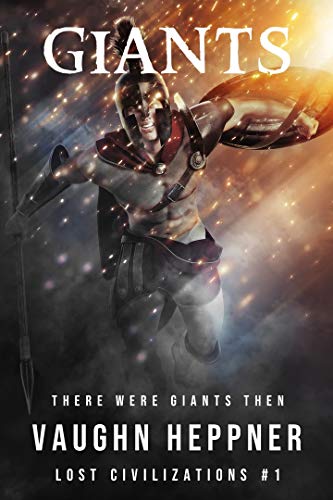 A pre-Flood slave escapes his brutish Nephilim master by climbing down a cliff full of angry pterodactyls, only to be rescued by a warrior for Elohim. And that’s just the first chapter of Vaughn Heppner’s Giants, the first of the Lost Civilizations series. Drawing inspiration from Biblical and extra-Biblical stories of prehistory, Giants soon thrusts Joash, the aforementioned former slave, into the mortal struggle between men and the wicked sons of the fallen angels, the Nephilim. Or better known as giants.

Although Joash finds a home as a servant of the Elohim warriors, what scant freedom humanity enjoys from being the giants’ playthings depends on the spears and chariots of Elohim. And the best horses run wild on the plains of Jotunheim, far to the north of Elohim lands. Joash accompanies an expedition rounding up wild horses in the land of the giants, stalked by an unseen presence that seemingly directs sabertooth ambushes against the Elohim camps. While tooth and claw winnows away the ranks of the Elohim warriors, Joash comes face to face with Mimir the Wise, the most cunning of the Nephilim. And after that, a life-changing choice.

“Elohim lifts His own champions. He or she can be anyone: a singer, a patriarch, a warrior or even a groom. But no one is forced into the contest. Elohim’s choice must be accepted. A free will is needed for that.”

Prehistory has long been a popular setting for heroic fantasy, but few settings come with as much baggage as the Pre-Flood setting. More often than not, the action is yoked to proselytizing and apologetics, both for and against Judaism and Christianity. Giants is blessedly free of these distractions, using the broad outlines of Lucifer’s rebellion to fuel an epic clash of fallible and mortal good against brutal and uncaring evil. Broad strokes of Norse, Greek, and even Lost World elements round out the setting, which is drenched with mystery and hints of unexplored worlds. But what really matters to Giants‘ story is the action of the moment.

Like other independent fantasy tales, Giants offers a “good parts” version compared to recent entries in the traditional field. Survival in the wilds of prehistory is difficult enough without the threat of Nephilim attacks. The demands of scouting, sentry duty, and enduring the elements weigh heavily on Joash’s shoulders, with little time for indulging in the lavish histories and worldbuilding that fill epic history. Except when said history may offer a key to Joash and his companions immediate survival. This allows more time to be spent developing the suspense that heightens every ambush, chase, and standoff. The action is quick, imaginative, and dripping with verisimilitude. One particular action scene, where men, sabertooth tigers, and giants clash in the ocean’s waves was so engrossing that it was almost disappointing to turn the page and read “The End.”

Fortunately, there are now seven sequels to quench that particular thirst.