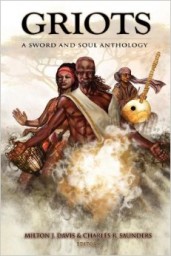 Back in 1979, Andrew J. Offutt had this to say in the introduction to Charles R. Saunders’ story “Mai-Kulala” in the book Swords Against Darkness IV:

“Charles Saunders hopes to sell an anthology of hf stories by various writers that will feature stories set in areas seldom written of–and peopled by protagonists other than the blue-eyed blonds or Gaels.”

Here we are over thirty years later and that dream has become a reality. Charles Saunders’ introduction covers his discovery and love for the sword-and-sorcery genre and his creation of Imaro, the world of Nyumbani, and the beginning of what he called “sword-and-soul,” and his finding of like-minded writers over time. Saunders describes sword-and-soul as “Fantasy fiction with an African connection in either the characters or the setting…or both. The setting can be the historical Africa of the world we know, or the Africa of an alternate world, dimension or universe.”

Milton Davis describes in his introduction wanting to find an African sword and sorcery book. While writing his first novel, Meji, he discovered Charles Saunders. Milton describes that he found more writers out there and decided there needed to be gathering of storytellers. Griots is the end result.

The book itself is trade paperback format, fourteen stories, 284 pages of prose, a biography section, and each story has an illustration by one of fourteen artists. Sword-and-sorcery published in the small press is where the excitement is at these days. I have enjoyed anthologies with new and unknown writers in small press books such as Return of the Sword far more than mass-market fare as the awful Swords & Dark Magic, which should have been named Swords and Scatology.

Editor Milton Davis starts things off with “Mrembo Aliyenaswa” (Captured Beauty). Davis’ recurring character, Changa, is sent by his employer to retrieve a stolen girl. There is some sorcery in addition to skullduggery.

“Awakening” by Valjeanne Jeffers is the tale of a girl who becomes an avenging warrioress with some divine help.

The traveling warrior ascetic is examined in Maurice Broaddus’ “Lost Son” as he deals with a treacherous priest manipulating his own people in the pursuit of power. Michael Moorcock, the Shagadelic International Man of Fantasy has been around more than enough to be an influence on newer writers. Kirk A. Johnson’s “In the Wake of Mist” has an eternal champion feel with Sangara of Da Boura and the somewhat psychedelic adventure he has chasing after raiders.

There is more sorcery than sword in Djeli A. Clark’s “Skin Magic.” This is one wild story of a man with markings on his skin of a sorcerous nature and his finding how to control them. A family stolen by a supernatural agent and put into a block of amber leads a quest of a young warrior and his grandmother to save them in Stafford Battles’ “The Demon in the Wall.”

Minister Faust’s “The Belly of the Crocodile” is a surreal story that went over my head. I didn’t get it and so won’t comment further. Carole McDonnel’s “Changling” is written more in the style of a modern fairy tale than a pulse pounding pulp adventure. It reminded me of the sort of stories by Jane Yolen that were in The Magazine of Fantasy & Science Fiction thirty years back. It made for a nice change of pace.

“The General’s Daughter” by Anthony Nana Kwamu is set in medieval Abyssinia. The plot but not the writing style is reminiscent of Clark Ashton Smith with a quest of a general to retrieve his daughter from the Realm of the Undying.
Martial arts training in the Temple of the Ochre Blade of an amazon is the central premise Geoffrey Thorne’s “Sekadi’s Koan.”

Old school sword-and-sorcery is alive and well in Ronald T. Jones’ “The Queen, the Demon, and the Mercenary.” Nothing like a sorcerer threatening the realm and the threat met by the wandering soldier, Toulou. He trains an army bringing in new tactics and weapons. Reading this story it becomes apparent that Charles Saunders is influencing a new generation of writers.
One story jumped out at me that should make the cut for the various year’s best fantasy story anthologies– Rebecca McFarland Kyle’s “Icewitch.” This story does not have an African locale. The setting is polar with a young man of mixed parentage seeking revenge for the death of a brother from the Icewitch. The story was creepy and touching at the same time.

Melvin Carter’s Sumunguru is a bad sword-and-sorcery mo-fo in “The Leopard Walks Alone.” This story takes place in medieval Spain. This appears to be a future series character.

Griots finishes with a bookend story by co-editor Charles R. Saunders. Imaro returns in “The Three Faced One.” This story takes Imaro farther to the north in Nyumbani than any other story written to date. It is also vintage Imaro who has lost nothing in the past thirty-five years. Imaro takes up the cause of an oppressed tribe as he enters a wrestling contest against a demonic adversary, the Three-Faced One. Your muscles and joints will ache after reading this one.

Griots has a mix of several different fantasy stories, it is not all blood & thunder though there is enough to satisfy the most bloodthirsty reader. I had never heard of the writers in this book outside of Charles Saunders. There are now names that I will watch for. Some will no doubt develop and go on to more and bigger things. There is a certain retro feel to many of the stories as there is a blood, soil, and culture aspect permeating them the way you get with Robert E. Howard’s Celtic stories or Poul Anderson’s Scandinavian derived stories. Sword-and-sorcery has often defaulted to a generic medieval background that is lacking in any particular flavor. The writers in this anthology are presenting a world unfamiliar to many if not most readers. As a result, new words and terms are used. Settings are described along with details such as clothing, dwellings etc. Sword-and-sorcery has gotten away from this with the move to the Glen Cook School of no description fantasy. I for one am glad to see a return to this form of story telling. So, if you have a need to feed the sword-and-sorcery habit like I have to, check out Griots.