GTD’s Napoleonic Wars game is… Different? Ambitious? Impressive? Innovative? Clunky? I hardly know how or where to begin. 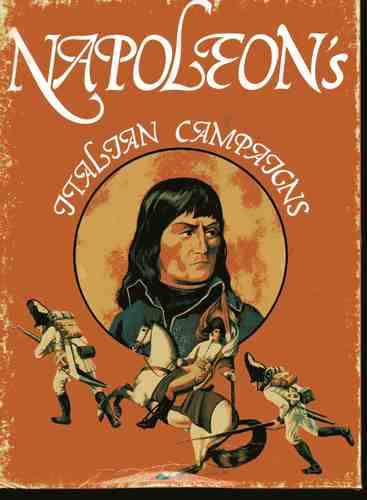 The Napoleonic Wars is actually a suite of games that can be combined, played separately, played sequentially, or played as a campaign. While there is a “core” game with a paper map for those interested in playing the campaign game which allows for up to six players, there are also individually boxed games, each representing a campaign or campaigns in Napoleon’s career – the Italian Campaigns, the Peninsular Campaign and the Russian Campaign. The three individually boxed games come with cardboard maps; if you have all three campaign boxes, you can fit the maps together to have the one big map of Europe used by the full game. I apologize ahead of time for the confusion that may arise in regard to the “campaign game” (which we aren’t playing) and the individual “campaigns” games that make up the make up the set.

Each of the campaign boxes includes the pieces, the order of battle sheets, modular map slats and scenario specific rules you need for that game. The Italian Campaign box, for instance, comes with some slats that cover Central and parts of Eastern Europe and the European parts of Turkey. Note that unlike many of the games we’ve been playing lately, this uses area movement, where a region’s interior terrain and border terrain affect movement and combat. 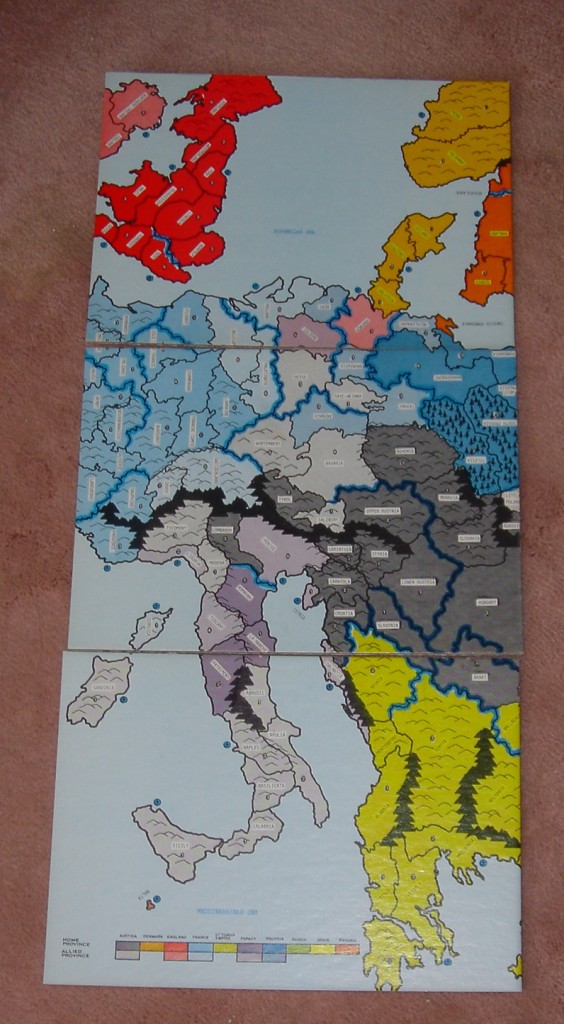 Setup felt more difficult than it should have been. While the Austrians with their black on white and white on black pieces were no trouble to get sorted out, many of the darker colored pieces, such as the French, were difficult to read. Also making the French Blue and the Prussians an almost indistinguishable Ben-Day Blue was a terrible design choice; luckily they’d been kept separate in the Neutrals bag for this game.

Napoleon’s Italian Campaigns covers 1796-1800. Interestingly, the game accounts for Napoleon’s African misadventures by taking him out of play on Turn 4 and replacing him with a different piece with a higher leadership and administrative rating much later. This phase of the game where Napoleon is missing is ideal for the Allies to turn the tables and stay in it a bit longer.

Play in this game is… Bizarre. Players do not take turns, rather the scenarios have a chart with each of the acting leader units in ascending order of how awesome they are. The first moving units of the games are various scrub leaders going through the ranks–regardless of faction–until Napoleon moves last. Of course, to make things more complicated, leaders who are further down on the list can choose to skip to the front of the line. There’s not much clarification as to whether or not this could be used to interrupt an action; it would be nice to say “Oh, since some French mook is going to attack Wurttemberg, Charles is going to skip to the front of the line and move his armies there to meet him”, but we’ve agreed, for better or worse, that leaders skipping ahead have to be declared before the active leader moves. Maybe this is wrong? I don’t know.

This strange play order also means that units you’d ordinarily setup on an Order of Battle sheet need to be kept separate so you can keep track of which units are in play so you don’t have to check each and every acting leader each turn. As it is, it’s not always easy to find where you left your commanders.

Combat is easy to adjudicate, but brutal in a way that feels rather broken. First, I need to explain what I meant earlier by “acting leaders” – while you have dozens of generals represented, only a handful of them have administrative capabilities; those that do can move (and are present on the aforementioned move order chart) and use their administrative rating to either take other generals with them or send them into other territories while remaining behind. When engaging in a battle, units are paired off with the defender putting forth his strongest to weakest and the attacker matching them. Each unit has an attack number and a defense number that are modified by leadership discrepancies, terrain and season; rolling equal to or under that number scores a kill. Units like Napoleon & Murat (6-6) score auto-kills, while other strong units like Charles (5-4), Suvorov (6-5) or Bagration (4-6) score auto-kills under certain circumstances. In gameplay, this translates to strong leaders killing each other off if they ever encounter one another. Combat modifiers only modify upward, so even scrubs can get a better than 50% chance to kill a much better unit. After a few turns, my dad and I had both lost most, if not all, of our leaders who could actively move themselves or other units. My strategy to use leaders with administrative ratings ONLY to move other leaders (essentially commanding from the rear) may have been implemented far too late to turn the tides in my favor.

Because of the high rate of leader death, the game went from incredibly long turns early game to some very short turns mid-game. Even so, the game’s advertised 1-hour quick-play time seems a bit far-fetched. There have been some amusing twists and turns in this game, including Alvintzy leading an expeditionary force as far as Burgundy, and Moreau capturing Vienna and defeating the Russians while Napoleon was away in Palestine, but fundamental flaws and vague rules have hampered our enjoyment of this particular game. With myriad Napoleonic Wars games out there, I think you can safely give this one a pass.