GUEST POST: Alex Stump on The Chronicles of Narnia 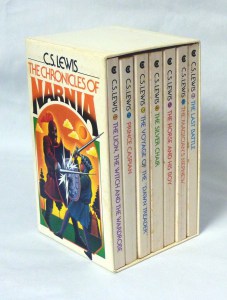 I never read the Chronicles of Narnia as a kid. The movies were good but I didn’t read the books until early this year. And after reading them all I wish was still a kid.

Okay, a lot of people know the story so I’ll make it quick. It’s World War 2, the Nazi Germans are bombing Britain, and bunch of kids take refuge in the countryside. One of the kids goes inside a wardrobe and finds a portal to another world called Narnia, a world of mythical creatures, talking animals, magic and Christian symbolism. The sequels continue the children’s adventures alongside their friends, relatives and some schmuck and his talking horse.

“So what exactly is so great about these books,” I asked myself while reading. I think it’s because one, it’s a fantasy. Not the popular Tolkien fantasy of elves, dragons, wizards and dark lords, it’s a fantasy that explores the imagination and the unknown – specifically the fantasy that amazes a child: magic, Greek mythology, talking animals and colorful worlds. All of it is in the Chronicles of Narnia and they bring a great scent of childish charm and innocence to them and I think that’s why the books are great for kids. Second is how surprisingly mature the Chronicles are. It’s not just the symbolism, there are some strong themes of responsibility, redemption, loss and some pretty dark moments. Narnia does a good job at making a bridge between kids and adults.

Of course I can’t discuss Narnia without talking about Christianity. You know a certain somebody once said, “The chronicles of Narnia is a bunch of Christian propaganda.”  Of course it’s propaganda you hedonist! It’s good propaganda. It’s the “Hello I’m Christian! Would you like to know some interesting facts about the Bible,” kind of propaganda. Like Isaac Asimov’s Foundation, Narnia firmly accepts its Christianity and unlike a lot of books takes the huge risk of integrating Christianity with its fantasy world and succeeds without being offensive. That alone deserves respect.

But Christianity is not the only religion Narnia touches on. I notice some…interesting nods to Islam. In the Magicians Nephew, we learn the witch is the offspring of a jinn, a supernatural being found in Islam. A Horse and His Boy is set in Calormen which is basically a fantasy Middle East. Slavery exists, the Warriors wield scimitars and their ruler is called the tisroc (great name by the way) who’s both a religious and a political figure who whenever they say his name they always add “may he live forever”. And in The Last Battle, the villain leads a Calormen army and invades all of Narnia and is asked, “Why should we follow you? You worship a false God named Tash.” And the villain’s response, “You fools! Tash and Aslan are one and the same, they just have different names.” Hmm…

(Okay maybe going too far, I must be missing something. I heard the Calormenes are actually based on pre-Islamic paganism and ancient Egypt I think. What do you think? Comments welcome.)

Alright, I’ll quickly give each book my honest opinion.

So in conclusion, the Chronicles of Narnia is a classic for many reasons. It’s great because of its fantasy world, it amazingly spins Christianity into the story and does a great job at appealing to adults and children.

What more can I say?