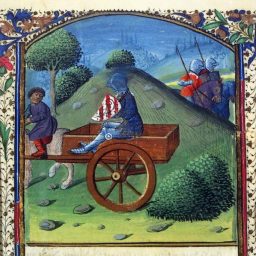 Lots of people make a series of errors when talking about chivalry, and the most common (and egregious) is conflating Chivalry with courtesy and Courtly Love.

Chivalry is ‘Bravery in war; warfare as an art; the military qualities expected of a noble knight; a body of armed men’.

Courtesy is ‘the showing of politeness in one’s behavior and attitude towards others’.

Courtly Love is ‘a ritualized and idealized code of romantic emotional conduct developed in the Late Medieval Period for the behavior of men and women at court’.

Are you a winged hussar with Jan Sobieski at the Great Siege of Vienna, facing the enemy without hesitation?

Are you thanking your waiter for the fresh glass of tea?

Did you just write a love poem for the wife of your boss, a woman you have no intention of ever kissing, let alone anything else?

In the end, chivalry is a tool to make sure your population of highly-trained, highly-motivated, dedicated, professional killers remains aimed firmly at outside threats. On the other hand, courtesy is the grease that allows society to function smoothly. Not all knights were courteous, and not all courteous people were thoroughly trained for the battlefield from the age of 8 on.

Which makes sense, really. Large groups of rich, bored women with professional writers and singers on their staff while their husbands are away, often in arranged marriages for political necessity and in an environment where real infidelity could mean execution? Would anyone be surprised if fantasies about rich, charming men who were so in love with them that they might die sold well?

But would anyone expect professional soldiers trained in warfare since before they could shave would participate in such tomfoolery?

As far as any serious historian can tell, Courtly Love was about as real as Fabio’s tan.

A real stumbling block in grasping the difference between chivalry and courtesy and coutly love is… fiction. Mainly Arthurian fiction. People make all sorts of mistakes about what Arthurian stories really are, which is ‘made up stories’. As I have mentioned elsewhere, Le Morte d’Arthur, one of the most widely read versions of the Arthurian tales, is not just a set of adventure yarns, it is a political commentary. The stories were written during the War of the Roses, when two groups of knights and nobles were ravaging England as each claimed the throne (sound familiar?). Each group claimed to be virtuous and good and each side then went on to commit various atrocities. Le Morte d’Arthur was a cautionary tale meant to teach that you judge people by their deeds, not their title or even reputation. Lancelot is a prime example of this – although a great knight and widely admired he is a fool, a womanizer, and a cat’s paw, easily controlled by any pretty woman.

This continues a great tradition of Lancelot as what TV Tropes calls a ‘Fake Ultimate Hero’ where the author (and usually the story’s characters) call Lancelot a great hero but he acts like a total idiot.

Written by Chretien de Troyes, The Knight of the Cart largely appears to be just another tale of Lancelot. He’s strong, he’s handome, he’  1s brave, he love Guinevere, and he is the World’s Greatest Knight. A careful reading, though, shows that Lancelot is a complete fool.

But Chreiten tells you up front all is not as it seems. He starts the poem showing you exactly what is going on. He begins the introduction by insisting he will not flatter his patroness, the (incredibly rich) Countess of Champagne. He then goes on, and on, and on about how smart, gorgeous, wonderful, amazing, graceful, etc. the Countess is, ending the barrage of flattery with ‘I only say these things because they are true’.

Bam! Eight o’clock, day one, Chretien is letting you know – this work is a subversion and a satire.

The next thing he tells us in the introduction is that the idea, the characters, and the plot of the story are not his idea – they are all the idea of the Countess herself.

Knowing this makes the following poem one of the funniest works I have ever read. Why? I can see this playing out in my head;

Countess: Chretien, I have an idea for a story [Romance novel summary dump]. Can you write this for me?

Chretien: For you, madame, anything (while silently cackling like a madman).

The entire poem is a satirical take-down of the core conceits of Courtly Love, and it is hysterically funny. Lancelot is the perfect epitome of what noblewomen dreamt of as a courtly lover while Gawain is often the voice of reason. For example, Lancelot and Gawain are in a tall spire when they see Guinevere riding away. Lancelot, overcome with love, plans to leap out the window to be as close to Guinevere as soon as possible. Gawain points out he just be killing himself, so why not take the stairs?

The poem gets its name from a scene in which Lancelot is conned into climbing into a cart reserved for the lowest, basest, and most vile of criminals and then paraded around, all for Courtly Love. On the surface, this appears to show that a man should completely debase himself for the love of a woman, and I suspect the Countess too saw it that way. This message is totally undermined by the author, though, and shows the ridiculous nature of Courtly love very simply.

How? After the abject humiliation of the cart ride when Lancelot meets Guinevere, she is cold, distant, and mean to him. Why?

He hesitated to get into the cart for a brief moment!

While I think this is missed by many, I think Chretien was showing Guinevere (and through her all the women invested in Courtly Love, including the Countess) as being self-absorbed, petty, vengeful, and shallow, completely annihilating the core conceit of Courtly Love – that women are so perfect men should die for them.

In that scene, the scene he named the poem after, Chretien paints noblewomen as not really being worth the effort.

Parallel to Lancelot being a buffoon we have Gawain, a knight with no entanglement with Courtly Love. Gawain is much more practical and, because of that, much more effective as a knight. Again, another subversion by subtly hinting that the sorts of men ‘into’ Courtly Love weren’t very effective, not even very manly.

Anyway, that’s my take on chivalry, courtesy, and courtlylove as well as the Knight of the Cart!”

Rick Stump is a long time dungeon master and the mastermind behind Harbinger Games. He blogs at Don’t Split the Party.