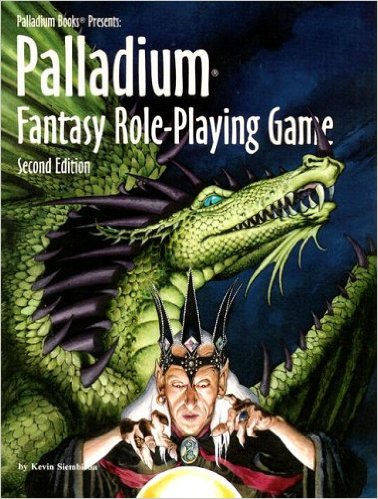 I’ll always have a bit of a soft touch for Palladium games. I mean… no sooner had I stumbled across a stray copy of the iconic Moldvay Basic D&D set, than I had a desire for something like that, but weirder. And Palladium was right there waiting with Teenage Mutant Ninja Turtles and Other Strangeness. After the cartoon and the movies, it’s hard to imagine how freaky that was when it was new. I spent countless hours rolling up characters and daydreaming about the Terror Bears, a twisted take on the then ubiquitous Care Bears. It was just awesome.

You don’t get over your first games. I don’t think you should, really. And I remember seeing a copy of the original fantasy game of the Palladium line at the store. Its black cover and occult themed artwork was actually too scary for me at the time, too frightening. So when my friends were picking up Robotech sourcebooks by the armload, I was grabbing a copy Heroes Unlimited, designing bionics-themed characters and rolling up super-powered mutants.

It’s taken a long time for me to swing back around and take a look at the game that really got Palladium off the ground. A lot of gaming water has flowed under the bridge since the bad old days. And the bigger, heftier descendent of that dangerous looking old tome is loaded with so much more stuff. It’s definitely something, that’s for sure. Looking at it now… I guess I would describe it as a game that is almost entirely composed of splat. That’s kind of an achievement in and of itself, but let’s break this down further:

But it’s not just a D&D variant by someone that absolutely had to go in and “fix” things that looked “obviously” broken to them when in fact there were darn good reasons for why they were done the way that they were. It’s also a fantasy game by someone who’s entire conception of fantasy was derived from D&D rather than the books that inspired it.

Elves…? They’re nothing like the creatures of The King of Elfland’s Daughter. Changelings…? They’re nothing like what you see in The Broken Sword. There is no cosmology at all, really. It’s Gygaxian Naturalism all the way down. And except for the first class treatment of psionics, all of the wonky anachronisms from science fantasy have been edited out in order to cleanly fit the genre restrictions fantasy fans have taken for granted ever since the eighties. Verily, this is the pink slimiest of pink slime fantasy settings.

Nevertheless it’s still essentially old school when compared to the past decade or so of mainstream rpg design…! And yeah, there is not one aspect of any part of this game that I would not feel tempted to alter, develop, or embellish. That is probably the most important element out of the entire old school oeuvre, oddly enough. Just like nonsense resulting from weird combinations of world profile elements in Traveller, it’s a strangely effective form of inspiration. Just like nobody can read Burroughs or Lovecraft without thinking, I can do this better…! Palladium Fantasy has that in way that today’s design-mad hipster-focused rpg crowd have largely walked away from.

It’s a huge part of the game’s charm and the main reason I would sit down and actually play it. Besides, nobody can truly love a perfect rpg. The incompleteness of the medium is precisely what makes it worthwhile in the first place. And the fact that they could cram everything you need to play into one low cost perfect bound book instead of requiring multiple fifty dollar hardbacks is just the icing on the cake.