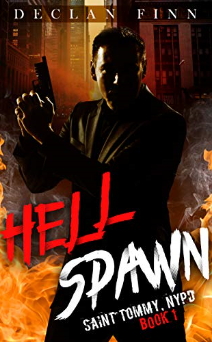 The hero of Declan Finn’s “Hell Spawn”, Thomas Nolan, is kind of a goody-two shoes that has been granted supernatural powers to aid him in his day job as a detective for the NYPD. Although not officially recognized as a Living Saint by the Vatican – yet, this is book one of a series after all – it’s pretty clear to those with eyes to see that Detective Nolan represents one of the ideal archetypes of Godly men. He’s a family man, a tireless volunteer at the local parish, and a homicide detective in one of the nation’s most crime infested cities.

Which makes him a threat to the powers of hell, who kick off the action in “Hell Spawn” by targeting the close friends of his family, and then tightening the noose around him as he investigates the series of close-to-home grisly murders. Facing the supernatural threat of demonic might, it takes all of Tommy’s faith and abilities, and a slow realization of his own supernatural abilities, to save his family and maybe the entire city from the ravenous hunger of the dark forces set against him.

Played entirely straight, the result is an urban fantasy for people who don’t like urban fantasy. Instead of the usual kitchen sink approach as seen in the “Iron Druid” series and countless magic-girl of the week series, Finn steeps the universe of Saint Tommy entirely in a Catholic worldview where Earth represents a battleground between heaven and hell. Though the dual nature of the conflict – good versus evil – lacks the political complexity of the kitchen sink approach, it also grounds the novel with a unified system that carries with it the weight of two thousand years of refining, evolution, and tradition. There are real rules to what can be done and how things operate, and that grounding in a single understanding of the rules of the game allows the action to proceed at a faster clip, and with considerably higher stakes than most examples of the genre.

Which is not to say that this is a book for Catholics only. The matter of fact presentation of the faith that lies at the core of this work never veers into preachiness or ham fisted apologia.  Hand wave away the protagonist’s explanations for his powers – most of the supporting characters do – and you’re still left with a gritty tale of a serial killer targeting a cop. Head-canon the supernatural abilities into a secular expression of natural law, and you’re left with a dark superhero tale that makes the nineties grimdark culture seem tame by comparison.

One word of warning on that note – and Declan Finn’s unflinching willingness to show the nature and effects of evil, this novel goes into some ark places where even the most bloody-minded Hollywood producers fear to tread. The setting being New York City, the usual political theater enters the investigation, and that would not be complete with a particularly gruesome discursion into the considerable influence wielded by the abortion industry on city and national affairs. The untouchable third rail of mainstream entertainment is presented with a frankness that some readers may find difficult to stomach.

Declan writes with an economy of words that packs a lot of impact into this relatively short novel. Never quite dipping down into the close-mouthed unwillingness to describe even the most recurring characters or locales, he nonetheless manages to present just enough information to keep things visually stimulating without dragging the action down.