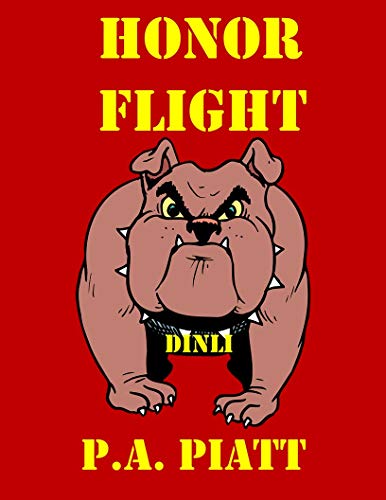 With “Honor Flight“, P. A. Piatt reminds the world of the importance of the independent publishing movement.  It’s a solid adventure story in it’s own right, and it really deserves a proper review based on it’s own merits.

We’re not going to do that.

We can’t.  Not when there’s a big, fat elephant standing in the living room dropping melon-sized straw-packed turds all over the carpet, and not when that elephant is John Scalzi’s “Old Man’s War”.Imagine if “Old Man’s War” took the central concept seriously, that it was written by a man with a healthy understanding of human relationships, and that the author knew literally anything about healthy masculinity.  Congratulations, you just imagined “Honor Flight”.

Fifty years ago, Earth forces were attacked by the savage and feral Maltaani on a backwater planet.  The ferocious defense of the Space Marines stationed there at the time delivered such a costly defeat to the strange alien attackers that they retreated to their own corner of the galaxy for fifty years to nurse their wounds.  The survivors of that battle returned to a now peaceful Terran empire to do what old soldiers everywhere have always done – live full lives and struggle to mourn the dead and understand why they were chosen to survive when so many good men were not.

The action starts slow, with the survivors of that battle returning to the scene fifty years later to commemorate the dead.  The fleet authorizes a bucket of bolts supply ship to haul two-hundred septuagenarians the week’s flight out to the middle of nowhere for a brief ceremony, and already we have a departure from “Old Man’s War”.  By authorizing the expense of this costly mission with only sentimental value, the Piatt’s Terran Empire already shows itself to be a nation worth defending.  John Scalzi goes to great lengths to paint Earth as a callous and unfeeling planet filled with selfish and petty people.  Without hammering on the story beat – there’s no ‘save the cat’ moment here – Piatt constructs a narrative where the stakes are larger than the survival of the old Marines.  They aren’t just defending Earth, they are defending an Earth worth defending.

While they are out on their cruise, Earth gets attacked by the perfidious Maltaani, and the jump gates that allow interstellar transit get shut down.  Earth itself is saved for the moment by a heroic off-screen last stand, but the loss of the jump gates and beacons they provide means Earth’s defensive fleets are pinned down and out of action.  That fleet was out on maneuvers and is effectively shut out of the race back to earth to prevent the approaching Maltaani fleet from completing its coup-de-grace.

Fortunately for Earth, two hundred old Marines are on their way back home in a rickety supply ship that makes for a perfect Trojan Horse to recapture the critical jump gate.  If they can scrounge up some weapons, sneak past the jump gate defenses, and overwhelm the profession and well-trained aliens that have conquered it.

Piatt makes a small nod to advances in technology.  These old Marines were given the best medical care and enhancements possible back in the day, and so they are generally stronger and fitter than most septuagenarians.  Unlike Scalzi’s immediate abandonment of the old man at war concept which stuffs the oldsters into superbodies that simply turn them young again complete with the lack of wisdom that comes with youth, Piatt sticks with the concept to the bitter end.  These are old guys.  They have aches and pains, and they know they have lost a step, but they are Marines, and many of them have been waiting fifty years for a chance to join their fallen brothers.

Piatt’s Marine characters show a depth and the wisdom that comes with age.  They might be old dogs, but they are salty old leathernecks who can expressive an abrasive and funny and warm personality all in the same sentence.  The politics of fleet operations feel right and believable, although the traitor thrown into the mix to complicate the third act feels like a bit of a stretch.  The romantic subplot feels a bit tacked on, and the contrast between the strong fleet officer on the one hand and the easily flustered ingenue on the other weakens her characterization somewhat.  She serves two purposes in the story that conflict with each other, and they would have been better served by two difference characters.

This is an adventure novel first, and it’s fairly short, so these are minor complaints.  This reads like first novel, full of an enthusiasm that helps smooth out the few rough edges.  Overall, the concept and execution of this novel are excellent.  It’s a fun look into the heart of the warrior culture, and it harkens back to the best that Campbellian fiction has to offer.  The intimate look at the brotherhood of arms, and the unabashed love of warriors for the man in the foxhole next to them – a real brotherly love – make for a welcome break from the childish refusal to understand that there’s more to love than sex.  “Honor Flight” is a mature book from an author whose name you should watch.  He writes military science-fiction from a solid military perspective, and in so doing invites the reader to develop a deeper appreciation for the personal costs of warfare.