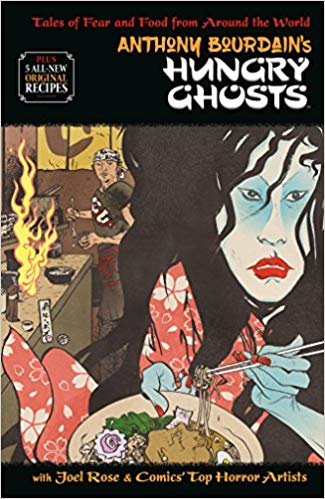 In Anthony Bourdain’s Hungry Ghosts, the celebrity chef and his co-writer, Joel Rose, combine three of Bourdain’s obsessions, food, storytelling, and the legends of Lafcadio Hearn’s Kwaidan, into an anthology homage to EC Comics’ classic horror comics. Despite the five recipes in the the extensive appendix, food here is a garnish, little more than a thin thread running throughout each of the tales of Japanese monsters. In the spotlight is the Japanese bestiary of horror, youkai, kappa, oni, etc., set loose in more familiar haunts to the reader. And in the best traditions of Japanese wordplay, the title, Hungry Ghosts, is not just an allusion to the food and horror themes, but a reference to a specific type of spirit found in Japanese legend.

It takes more than themes and gimmicks to bind together a horror anthology. Here, Bourdain and Rose rely on the popular Edo-era storytelling game called 100 Candles (or Hyakumonogatari Kaidankai), where participants would gather in a dark room illuminated by 100 candles. Each participant would tell a harrowing tale before extinguishing a candle. Once complete, the storyteller would glance into a mirror to check if they were still human. As the light fades in the room, the stories grow more disturbing. Summoned to this particular test of courage, hosted by a wealthy Russian kingpin, are eight of the world’s best chefs, each with their own Weird Tale.

As mentioned, the nine ghost stories are familiar to Japanese folklore, showcasing youkai (monsters and spirits) of all kinds. Favorite youkai from Kwaidan appear, including the flying heads of the rokurokubi and the snow woman. Each Japanese monster gets shifted in setting to a more Western one, following the tradition of horror and weird tales in moving from the familiar to the strange. The result, paired with the excellent art, adds to the haunting creepiness of each story. And final panel twists turn even the melancholic tale of the snow woman into implied horror. Standouts include “Deep”, a story of kappa and hazing, “The Starving Skeleton”, a story of selfishness and spite, and the traditional “The Snow Woman.” Finally, the hungry ghosts appear, wrapping up their story and the book with a hellish feast. 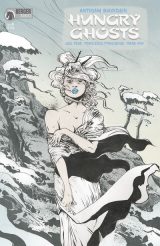 It is these hungry ghosts, the jikininki of Kwaidan, that reveal the underlying theme of this anthology. Driven by intense emotion into animal frenzy, the youkai of Hungry Ghosts invariably prey on men and women who have allowed their urges to turn themselves into animals. The Seven Deadly Sins are showcased here, luring the proud, the glutton, the lustful, and the wroth to their destruction at the hands of monsters. Given Bourdain’s involvement in the recent #MeToo movement, several of his tales dealing with revenge against sexual predations might appear linked to current events. The vengeance meted out in each story is timeless and always tied into the actions of the doomed, not to the whims of 2017 politics–else “Deep”, the kappa’s tale of male hazing in the kitchen straight from Bourdain’s earlier autobiographical works, would not have been included. Unfortunately, “Deep” also reveals a weakness in Bourdain’s comic books. For such a well-traveled author and television host, his three comic books invariably rely on the same set pieces found in Kitchen Confidential, Medium Raw, and The Nasty Bits.

As a showcase for the art of many of the best horror comics artists, Hungry Ghost features a number of divergent styles. Save for the ukiyo-e influence on the ghostly narrator who, like the Cryptkeeper in EC Comics, opens and closes the book and the manga styling of “The Snow Woman,” the art styles are Western, with traditional American comics, bandes dessinées, and even newsprint design elements. Rather than glory in the shock of blood and violence, Hungry Ghosts instead keeps the most frightening bits off panel and in the mind’s eye. While a couple stories rely on the gruesome for horror, such as “The Salty Horse”, the artists rely on a number of effects including color palette, contrast, and even panel design to heighten the emotional impact of this book. 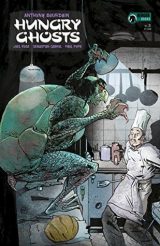 With the sheer number of Japanese terms thrown around, it is easy for a reader unfamiliar with the culture to get lost. Fortunately, Hungry Ghosts offers an appendix explaining the 100 Candles game and each of the monsters found within. The charcoal depictions of the youkai are excellent, mimicking those found in classic Japaness youkai books, and in some cases are more terrifying that the depictions in the graphic novel. For the foodies, Bourdain offers five new recipes not found in any of his other cookbooks. With the exception of Tokyo ramen, these all reflect Bourdain’s roots in French cuisine. Those foodies looking for a take as unique on Japanese dishes as Hungry Ghosts is on folklore should instead try David Chang’s Momofuku. Finally, Joel Rose gives a memorial to Anthony Bourdain, revealing that the obsessions with Kwaidan and EC Comics were Bourdain’s.

Foodies might be disappointed with Hungry Ghosts, as the stories are about the ghosts instead of the food. But for those looking to recover a bit of the dark moody danger of folklore, fantasy, and horror from a world increasing making the monstrous familiar, Hungry Ghosts is a welcome collection of weird tales. 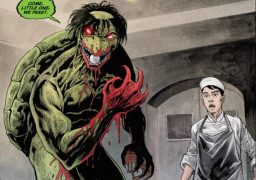