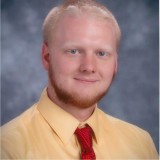 Stuart Thaman is an author and German teacher for the Diocese of Covington in northern Kentucky.  His debut novel, “Vatican Massacre”, reached #1 on Amazon’s religious fiction best-seller list.  His second novel “The Goblin Wars Part One:  Siege of Talonrend” is the beginning of a series of fantasy novels that follows Gravlox, a goblin foreman, as he ventures from his mountain lair in search of adventure.  The second installment of Goblin Wars is due in December of 2014.  His latest novel is the supernatural horror thriller “For We Are Many,” coming soon to print and e-book, courtesy of Hydra Publications.  Thaman is a lifelong resident of Cincinnati, Ohio.

Does anyone in your family have a background in the arts?

Nobody in my family really has a creative background.  My mom was an athlete and a gym teacher.  My brother is a musician — that’s about as close as you can get.  I play guitar as well.  Musically my brother and I are more inclined but creatively nobody in my family has done anything like writing at all.

You mentioned that you began writing in earnest for the National Novel Writing Month.  How did that come about?

It was right after college and I couldn’t find a job.  One of my friends was doing the National Novel Month Writing Contest and suggested it to me, and I thought, “I read every day.  I have all the time in the world since I can’t find a job.  So I might as well try it.”  And as soon as I started — from the first day writing — I fell in love with it.  I haven’t stopped writing since.

I actually did see the movie.  And while people have problems with just about every movie that comes from a book, I really liked it.  I thought they did the things they needed to do.  They nailed the theme.  Whether the characters were exactly spot on or not was not as important as getting the feeling of it right.  They did it pretty well.  That series is one of my all-time favorites.

I know you are a fan of David Dalglish and R.A. Salvatore.  What draws you to their works?

They just have the best written characters.  That’s it.  Especially with Dalglish.  His main characters are half orcs.  They aren’t characters you would see in a stereotypical cookie-cutter fantasy.  So when I set out to write my first fantasy novel, I wanted to take that approach and avoid having my main character be a stereotypical elf with a bow.  And so I picked goblins for mine.

When do you find the time to write and how would you describe your creative process?

Most of my writing happens in the summer. During the school year a lot of my writing is from the hours of maybe eleven at night until two or three in the morning.  Late at night seems to be the only time that I have some peace and quiet.  So if I can stay awake, I’ll get some writing done then.

What do your students think of your novels?

I have had a few students that have read Goblin Wars, and for the most part everybody likes it.  It’s always interesting to get feedback.  I know that one of the elementary schools that feeds into my high school have actually stocked my book in their library and it’s the most checked out book there.  So I’m pretty happy about that.

Which do you enjoy better, writing or teaching?

That’s a hard choice.  [laughs]  Both of them are kind of surprise career paths for me.  I never thought I’d be a teacher and I never thought I’d be an author.  I like teaching a lot because it’s one of the only environments where I get to speak German on a regular basis, so it helps keep my own skills sharp.  And watching other people pick it up is pretty gratifying.  But I don’t think there’s anything that can really compare to receiving my first print book when it was published.  Receiving it in the mail, the proof, the check, and sending it back to the publisher and everything – that was pretty intense for me.  You can’t beat that.

How do your degrees in Politics and German inform your writing?

They are one of the things that started influencing me to write.  When I was doing the contest I realized my thesis for my German major was nearly as long as a 50,000 word novel and it wasn’t even in English.  [laughs]  So I figured if I can write that in — and I am a real procrastinator – around two months, I knew I could write a novel in 30 days.  But in terms of my political studies, my concentration in college was classical political philosophy.  So I’ve read pretty much everything that has ever been labeled as a classic of literature.  “The Aeneid” is one my favorite works of all time.  Reading that and realizing what makes it great helps me understand what concepts really resonate with readers and make a good story.

What do you think some of those concepts are?

A lot of it is the timeless hero idea.  Aeneas in the “Aeneid” is probably what I would consider the pinnacle hero character.  He does almost everything correctly, but he still has his flaws.  He’s not perfect by any means but he has a goal and sets out to accomplish that goal carrying the entire weight of the city of Troy on his back.  Those kind of heroic qualities are what resonate.  But in a lot of fantasy the characters are too perfect or too flawed.  Character immunity applies here.  In some series the main character is fighting against tremendous odds, but you might as well not even read that fight scene because you know he is not going to die or get wounded.  A lot of times in the classics there are some unexpected outcomes that make the characters more relatable and real while still being heroes. 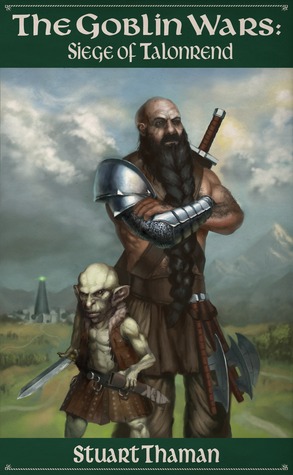 What was your inspiration for The Goblin Wars?

It’s kind of weird.  At the time I was working at a German restaurant and I looked on the menu one day — I was just bored — and they had an appetizer called “gravlox”, which is baked salmon with some spices on crackers.  And I looked at that word.  I had never seen it before, and I thought it would be an amazing name for a fantasy bad guy.  It was a really slow day at the restaurant – I don’t even think we had a single customer that entire day – so I got a roll of receipt paper and I started writing the goblin wars on the back of a blank receipt.  And it sort of evolved from there.

The goblin government has a Ministry of Assassinations.  I take it goblins have no use for propaganda or Orwellian doublespeak.

Yeah, not much.  There is a line in the very beginning.  “If the regulations get out of hand, they don’t cut through the red tape, they simply cut the throats of the ones making the tape.”  The goblins are a pseudo hive mind, and while not exactly lawless, they don’t value the life of the individual at all since they can readily replace them.  The individuals themselves can’t reproduce so they are not integral parts of society.

You’ve mentioned that you enjoy exploring the darker aspects of theology in your writing.  Why do you think that is?

I don’t really know.  [laughs].  I like theology a lot.  I’ve actually been considering attending seminary for my PhD in theology in order to teach at a college level.  As far as the darker aspects, take the Bible for instance.  There’s a lot of scenes that most people don’t even know exist, some really brutal murders and things like that.  I just like those scenes.  My thesis in college in German was actually on the idea that if God is all-powerful and can do anything, then any action he allows to happen is because it’s part of his plan.  It’s Luther’s thesis in “The Bondage of the Will”.  I like the tough questions that you have to ask and really study to understand.

And is any of that kind of exploration going to be present in your new horror novel “For We Are Many“?

There’s definitely a little bit of theology in there.  That line – “For We Are Many” comes from the Gospels, when Jesus exorcises the demon Legion from the man chained to the hillside and sends the demons into the herd of pigs.  My novel kind of plays on that idea, because when the demons are exorcised from the man and they are placed into the pigs, the passage says that the pigs are then drowned in the nearby lake.  And it never says anywhere after that what happens to the demons. Killing the body does not kill their soul, so where do they go?  It’s kind of an interesting idea I try to play around with in the book.

“The Goblin Wars:  Part II” will be my fourth, yes.

How do you think your writing has evolved since you first started out?

It’s gotten a thousand times better.  Without a doubt.  I look back at my first novel “Vatican Massacre”.  I’ll admit I’m not even a huge fan of it.  Some people like it, some people hate it.  It sells well, and it’s a decent book.  It’s not good, it’s not great.  But everything I write is better than the last.  Like anything, you have to practice to get better.  I talked to an author at an author’s fair and she said she’s written five or six practice novels that she didn’t have any intention of publishing – just practice novels – and she would give them to her editors and beta readers and they would read them and tell them what they liked or didn’t like.  And that was it. She would learn from the experience and save those manuscripts to a hard drive somewhere and move on.  That kind of thing really does help.  The more you write, the more you’ll get better at it.