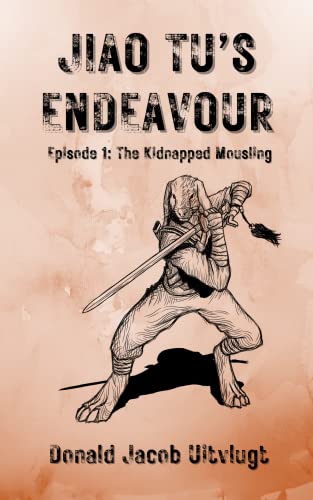 Somewhere, far off course in the vast reaches of space, the generation ship Endeavour flies blind. Her human colonists remain in suspension, while the ship itself is serviced by societies of Uplifted animals. The decades, or even centuries, of isolation have taken their toll, and the societies have stratified according to the decks and functions of Endeavour. With the pilot caste missing, various schemes to fill the vacuum are underway, especially in the hidden recesses of the engineering spaces.

And it is into this underworld that Jiao Tu, a wandering wuxia rabbit swordsman, must venture to save a kidnapped mousling, risking war with bandits, the secretive Systems clan, and the Reclamations cult.

Let’s deal with the elephant-sized mouse in the room. Yes, Jiao Tu’s Endeavour is an anthropomorphic fantasy with a science fiction veneer written at a time when, thanks to attention seekers and online perverts, anthropomorphic art and literature has a degenerate, and often repulsive, reputation. Jiao Tu may be anthropomorphic, but there isn’t the smug, smirking pride (and ugliness) of furry. Instead, the rabbit’s adventures are a wuxia Redwall in space, as if Brian Jacques penned a volume of Usagi Yojimbo, or the Shaw Brothers used animals instead of actors. Those looking for the Slaaneshi excesses common nowadays to anthropomorphic fantasy can find another story. Jiao Tu’s Endeavour is one of bravery, action, and manners.

But enough on what Jiao Tu’s Endeavour is not. Let’s instead talk about what Donald Uitvlugt’s collection of stories is.

“Have sword. Will travel.”

Jiao Tu’s Endeavour lives in that shared creative space that encompasses wu xia martial arts underground, wandering samurai, American Western, sword and sorcery, and science fiction stories, borrowing liberally from each tradition. The science fiction influence give naturalistic, yet exotic causes to the sword and sorcery-inspired cults, and the chinoiserie blending of Chinese-inspired culture with wandering ronin tales adds a layer of culture and order alien to the lawless West.

Jiao Tu himself is a cultured, polite, and deadly rabbit with a mythical sword, calling up comparisons to Usagi Yojimbo and Crouching Tiger, Hidden Dragon’s Li Mu Bai. A rabbit of learning and of justice, who keeps most of his secrets and motivations close to the vest. He has been hired to retrieve the mousling Farrah, and that he will do. He might not know the way, but he will return with Farrah in tow, no matter what obstacle is in his way. Culture and humor round out his character, allowing him to seek the indirect approach when needed. He is joined by the young and impetuous Zhu Song and the jovial and cunning bandit king Chooha, each with their own reasons for finding Farrah. Their adventure plays out with the twists and turns expected from the uneasy alliance between youth, experience, and greed.

Perhaps the strongest suit is the setting. The exposition is slim, revealing key details needed for the reader to make sense of this strange space-faring carnival of the animals. This keeps an air of mystery around the vast farming biomes and winding corridors of Endeavour, and, rather than just being an excuse to have anthropomorphic characters, the fact that Jiao Tu’s world is a spaceship influences everything within the societies, from their organization around vital ship’s functions, to the various alms and ailments affecting the wayward crew. The chinoiserie veneer provides both a familiarity of an ordered society to the reader and an alienness to that same culture. There is action aplenty, as befitting the tale of a wandering swordsman, but there is also a joy to reading how Jiao Tu interacts with the worldship and societies of Endeavour, and watching how his world develops.

Jiao Tu’s Endeavour is currently serialized on WordPress, with the first episode available on Amazon for Kindle and paperback. It may be a stranger and unorthodox setting and story for this age of space marines, but those looking for a respite from countless star wars may find shelter along this rabbit’s path.