Not too long ago, HP of Throwback Thursday fame and I decided to both read the same book and write up our reactions. This wouldn’t be the first time for us, though this time we agreed on a book mutually and well ahead of time. Because he is a gentleman, he also offered to let me have first crack at it this go around. And so I’m now ready to report to you on my reading of At the Earth’s Core, by Edgar Rice Burroughs.

I’d like to lead by noting that I’ve not yet gotten to Tarzan. The only other ERB I had read before this were the first three installments of the Mars series. Along with Robert E. Howard’s Conan and a gateway Jack Vance novel, John Carter is what really got me interested in Appendix N and solidified my appreciation for old, pulp SFF. So I don’t want you to misunderstand me when I say this – the first Pellucidar book smacks heavily of Mars. John Carter and David Innes could perhaps be long-lost twin brothers. 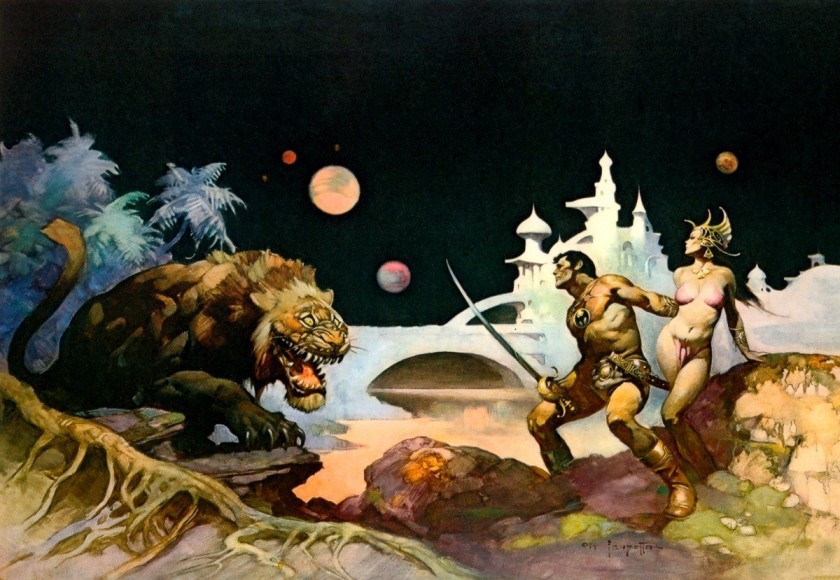 While a part of me was somewhat disappointed in some of the obvious commonalities and borrowed plot devices, something else inside me rebelled against that critical reflex. It was my sense of fun!

I don’t want to go too heavily into spoiler territory yet, so I’ll save a few more detailed analytical points for the end. Suffice it to say, At the Earth’s Core reinforced for me the sublime talent of Edgar Rice Burroughs. Yes, some of his story elements seem to me to be recycled. But look at classic Westerns Rio Lobo, El Dorado, and Rio Bravo! Some new characters and a shuffle of the plot line combined with solid writing can make for multiple iterations of great storytelling. Truth be told, I’ve never been a huge fan of the “lost world” genre in general. Modern men taking on dinosaurs was just never really a huge draw, and so I wasn’t sure I’d appreciate the Pellucidar books. To my delight, there was a lot more going on than that, and just as one might label the Mars books chiefly a fantasy story within a scifi setting, I’d say Pellucidar is more a fantasy story within a lost world setting.

David Innes and his companions do encounter terrible, prehistoric beasts, true. But they also run into other, stranger beings. Ape-men, yes, but worse and more intelligent beings dwell within the hollow earth. If you’ve read this far and your interest is piqued, then by all means retire here and seek ye a copy! If you’re already familiar with the work (and with the Mars books) or are unconcerned by spoilers, let’s talk about some specifics.

My only real somewhat major criticism of the first Pellucidar story, and I assume this carries onward, is the strange concept of time that Burroughs works with. We’re told that because of the inner world’s fixed “sun” and lack of night and celestial bodies, David and Perry (we don’t know of the natives) are unable to accurately tell time. Not an unbelievable concept initially, this begins to strain credulity when David declares himself unable to discern the difference between seconds, months, and even years.

“It was a difficult thing to attempt to figure out by earthly standards—this matter of elapsed time—but when I set myself to it I began to realize that I might have been submerged a second or a month or not at all. You have no conception of the strange contradictions and impossibilities which arise when all methods of measuring time, as we know them upon earth, are non-existent.”

Still, perhaps there is some as of yet unexplained mechanic or fantastical element in play. Regardless, I found this treatment of time to be somewhat jarring, but not significant enough to ruin the rest of the story.

Another ripple was something particular about Perry’s behavior. When David first proposes a plan of escape, Perry protests, as it involves the murder of sleeping Mahar. Murder is murder, he tells David. Yet only a little later on, Perry gleefully puts forward a plan that would lead to the extinction of the Mahar people and pave the way for the dominance of the humans. Perhaps there is a difference in letting the nasty bird-lizards die and killing them outright, but this still seemed like a pretty major and sudden about-face for the pious professor.

As to the similarities between Mars and Pellucidar, let me list what came to mind for me:

David Innes & John Carter – Handsome, brave, capable fighting men (Carter by profession and Innes merely by ability); both foreigners to new worlds; both charismatic leaders of men and eventual warlords; both with superior strength and agility due to gravitational differences (though JC’s powers are much more profoundly pronounced). 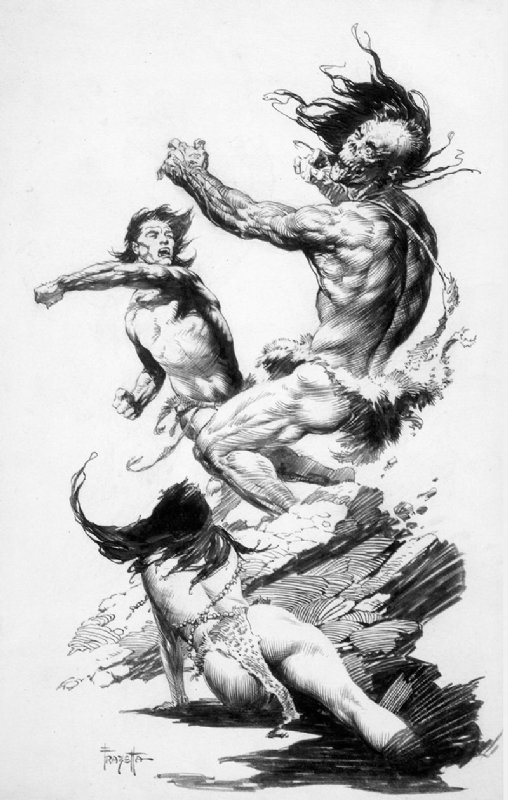 Dian the Beautiful and Dejah Thoris – Daughter of kings and daughter of jeddaks, respectively. Both women are said to be singular specimens of two worlds, wooed by and wedded to the storys’ protagonists. Both are said to be of surpassing beauty, and are proud and brave and honorable. They also both, though initially attracted to the hero, suffer some breach of local etiquette unknown to the outworlder. As a result they scorn the protagonist and must be won back.

Fierce worlds with fierce peoples – Mars and Pellucidar are both populated by many dangerous creatures, and both worlds are the home of multiple races competing for dominance. The green, red, yellow, white, and black Martians of Barsoom are (as of yet) more numerous than the races of Pellucidar, but I’ve only the first book of the latter series to go on for now.  At the Earth’s Core introduces us to the Sagoth, the Mahar, and the men of the inner world.

Capture and escape – John Carter is captured by the green men of Mars relatively early on in his story. He’s allowed a degree of freedom and goes on to win the respect of his captors. He eventually escapes, though he meets up with the green Martians again later. David Innes and Perry are captured relatively early on, as well. The Sagoth bring them to one of the Mahar cities, where they are enslaved. As slaves, they’re allowed a degree of freedom, and David goes on to escape, though he eventually returns to the Sargoth and Mahar in order to free his friends.

Expelled from their new home in a cliffhanger – The first book of both series ends with the protagonist being send home either against his will or in a manner he did not intend. Both men are separated from their new wives and must endeavor to return.

Despite all of these commonalities, we still get an excellent and mostly unique story. As with A Princess of Mars, the beginning of the tale is a little slow, but once things get going we’ve got action, romance, and even bits of grotesque horror. ERB hits all the important beats. I don’t usually rate books numerically; I’d rather lay out my thoughts and let you judge whether or not it sounds interesting. In honor of HP, though, I’ll give this one a 4.5/5.

If you haven’t read At the Earth’s Core, go check it out, or at least add it to your queue!