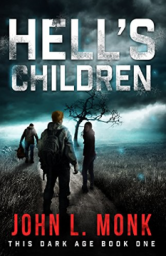 Post-apocalyptic literature has a tradition almost as old as literature itself. From the Egyptian drowning of the world in the seas of chaos to the pagan world eating wolf of Ragnarok to alien and kitchen-sink approach of the Biblical Apocalyptica, wondering about the death of the world is as natural as wondering about the death of one’s self. As technology changes, the instrument of the death of Western Civilization has also changed. In John L. Monk’s This Dark Age Series the end of the world kicks off with a vaguely defined whimper, and the ramifications of the method by which civilization dies informs every aspect of the narrative – an important aspect of doomsday literature not always present.

It’s no spoiler to reveal that the end of the world as the characters in This Dark Age know it comes about due to a mysterious ailment that eventually afflicts everyone. Children fight off the poison/disease/curse, with increasing age reducing one’s chances of survival until the age of roughly 17, when the mortality rate reaches zero. While the central concept of “only children survive” has been done before, Monk’s take on an apocalypse where children literally inherit the earth presents a vision with an extraordinary level of detail that goes far beyond most of it progenitors.
The slow motion death of civilization as the disease/curse gradually wipes out adults allows for a winding down of the gears of modernity. Power plants are calmly switched off by the last of the surviving adults. Cars are left in the driveways and not piled up in vast highway sized parking lots. Buildings are left to weather and rot with their corpses slowly rotting away inside. A few of the longest surviving adults, seeing the writing on the wall, even manage to cobble together a hasty legacy for their children in the hopes that a few critical stockpiles of food, shelter, and weapons might make the difference between the survival of the species and its extinction.

This sets the stage for the hero of the piece, Jack, a reluctant leader homeschooled by parents who birthed him late in their lives, and who prepared him for their departure with a singlemindedness borne out of a recognition of their own mortality rather than a conviction of impending global disaster. That their death occurs earlier than expected, and as a result of an apocalypse, is irrelevant; the important thing for their son is that they raised him with a “you are on your own” mindset from the beginning.  As a result, Jack finds himself far better prepared for the new world than most of his contemporaries. At age 15, he also finds his relatively old age an advantage in the new world. The advantages of his upbringing are counter-balanced by Jack’s decency and unwillingness to turn his back on those in need, as compassion soon proves to be a distinct survival disadvantage.  It complicates Jack’s life, but from a narrative perspective, it also provides a nice hook for the reader to root for him. 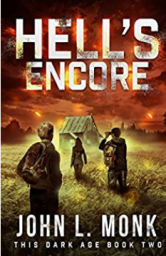 The first in the series, Hell’s Children, deals with Jack’s steady accumulation of a small following, many of which consist of children under the age of 10 who prove to be more liability than asset. Jack’s fledgling society rubs up against the neighboring tribes of teenagers willing to close-out humanity’s time on earth with joyriding, drinking, and casual sex, particularly in the second installment, Hell’s Encore. Jack’s own day to day struggle for survival takes a much longer view of things, and so he finds himself pushing the children around him to plan for tomorrow and next season and next year – a concept as alien to children after the fall of their parents as it was before that traumatic event.

If you’re a fan of post-apocalyptic fiction, this series hits all of the usual notes. Survival porn is present in heavy doses, with the survivors taking advantage of the last few scraps of easy technology, knowing that soon the last gasoline will be gone, and that within a few years the last diesel will as well, to take one example. The children have no experts on anything on hand, and have to learn the hard way about such things as the painful effects of vitamin deficiency, and the resulting strange hunger for things like animal liver, lungs, and fatty tissue.

Many post-apocalyptic novels leave the reader wondering how the idiots in the book managed to survive to the end of the world, let through it. For some reason most authors think a little thing like zombies rising from the grave, or nanobots eating every drop of refined petroleum and plastic in the world, or literal angels and demons striding like colossi across a blasted landscape will have no effect on the survivor’s psychology. They plant regular people with regular mindsets into the midst of such activity and rely upon normal human behavior to generate the inter-personal drama to complicate the already dramatic struggle for survival. Take the classic example of Stephen King’s The Stand where very few people seek the solace of the Christian faith despite widespread evidence of God’s hand at work.

Such silliness rarely appears in This Dark Age Series. The easy path would be to paint all of the “bad kids” as psychopaths who had been waiting for the end of the world, and relished it without regret. Instead, Monk uses a deft touch that allows for touches of regret and sorrow even by the vicious and cruel the leader of the first gang of “bad kids” Jack encounters. In fact, many of the rank of file members of the “bad kids” armies are clearly caught up in their circumstances and prove eager to leave their gang for the more moderate and forward thinking colony established by the lead character. Even the leader of the “bad kids” initially shown to be vicious, later earns some redemption as a young man whose leadership tactics of calculated brutality are shown to have merits of their own.

To be sure, many of the children suffer from PTSD and act out appropriately. Many of the older teens take advantage of their new positions to abuse those under their charge. But the few instances are presented as a spice and occasional obstacle, not the constant grinding opposition.
In this case, survivors acting like children is understandable, given that they are children. It doesn’t come across as cheap or lazy, merely accurate and appropriate.

On a more personal note, this was a hard post-apocalyptic series to read specifically because of its plausibility and the full cast of characters who cannot watch an R-rated movie now that there is no one left to accompany them. Speaking as a father of children ranging from pint-sized to cusp of adulthood, this series hits home harder than most. The natural inclination for any post-apocalyptic tale reader is to place oneself in the role of survivor. Would I have thought of that? Could I have escaped from that? Would I abandon an ally to ensure my survival or go down swinging rather than betray his trust? The answers can be revealing and allow for some self-discovery. But that doesn’t happen to a parent reading This Dark Age Series. Instead, a parent will find himself putting not himself at the center of the action, but his own children.
And that makes it an all too frightening glimpse into a more modern tale of the end of the world.