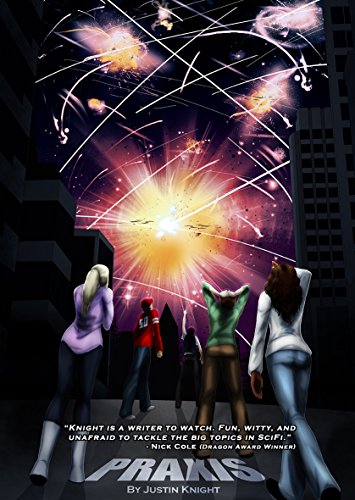 A group of blue collar workers are selected to run the first manned space station, Praxis, at the edge of our galaxy. It will be part of mankind’s bold ambition to explore beyond what we know.

But trouble is heading right for them. A gang of vicious alien pirates are fleeing justice, intent on continuing their bloody campaign, and Praxis is in their way.

The workers will have to defend themselves, unarmed, against a ruthless enemy intent on killing them. The biggest threat though, may be the station itself…

Praise for Justin Knight and Praxis:

“Knight is a writer to watch. Fun, witty, and unafraid to tackle the big topics in SciFi.” – Dragon award winner Nick Cole.

“Knight’s blue collar characters are genuine and engaging. The time spent getting to know them heightens the impact when they are thrust into a gripping & savage fight for survival.” – Jon Mollison, author of Sudden Rescue.

“Action packed, engaging characters, and one of the most creative premises I’ve encountered.” Bre Faucheux, author of Violet Drake.

“Compelling characters that feel real. Its got a bit of everything from corporate intrigue to a romance you can root for. Stella work.” – Jon Del Arroz, Dragon award nominated author of Rescue Run & For Steam and Country.