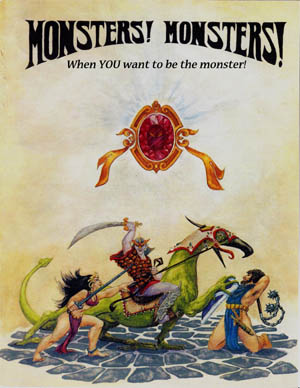 You’ve heard about Morgan Ironwolf, Black Dougal, and Aleena the cleric. What I want to know is… who honestly sits down at the gaming table and wants to play characters like that? Clean cut. Squeaking clean. Heck, even Borg the fighter is marked as being Lawful. Sorry, but that is not at all how the scruffy kid in the Black Sabbath T-shirt is going to roll.

And epic quests to save the world… again?! Bah! After observing countless fantasy role-playing game sessions I have to say… I’ve never once seen a party with any amount of autonomy strike off into the unknown with the intent to do something like that. You know the reality. Players don’t want to do anything except kill things and take their stuff. They’ll mark their alignments down as Neutral… and then play as Chaotic as far as they can get away with it.

Isn’t it about time you had an rpg that acknowledged the truth what you’re actually going to do with it? One where the sample character is more like this:

Even better, making a character skips over that business of rolling up attributes and then seeing what class you qualify for. No, this game does not pussyfoot around with that stuff! Character creation in this game begins with something… a little bit different:

First, decide what type of monster you will play. You may, of course, choose any kind you like — but if you want to be sporting, take a deck of ordinary playing cards and pick one at random. Consult the ‘Card’ column of the MONSTER TABLE to see what you will be. Will you get the lordly dragon or the lowly snollygoster? It adds a little more challenge if you have to play with a puny monster, and a game where everyone is a ten-foot troll can be rather boring.

That’s right. Way back in 1976, nobody was particularly concerned with seeing to it that every single character type was balanced against all the rest. Nobody was going to insult you for being a weenie that is psychologically incapable of taking whatever the dice (or cards) give them, either. But face it, you are a weenie if you can’t have a good time playing a goofball of a monster. And you know it’s the case that the guy playing the lamest character in the party is liable to have the most fun.

The rules are straight ahead Tunnels & Trolls in the process of morphing into the famed fifth edition of the rules. If there are parts of the old game that confused you, you’ll find examples here that will inform you as to how the guys in Phoenix actually adjudicated this stuff. Even better, you’ll get to enjoy snarky comments from a then-unknown Steve Jackson, who functions as sort of an editorial peanut gallery here.

My favorite footnote is from the great Ken St. Andre himself, however. It’s in the “Setting up the Map” section:

Before the game can begin, then, the GM must familiarize himself with the rules and make some preparations– chief among these being the preparatio of the human environment which the Monsters will invade.¹

Here the designer notes: I, myself, created a whole city for monsters to attack… – KStA.

It’s as if creating an environment from scratch for a bunch of demented role-players to stomp around in is the most awesome thing ever. And judging from what happens when people still do this today, I have to say… this as an entirely accurate assessment!

The great thing about this rule set is that it is not that hard to come by. Flying Buffalo has seen fit to reprint it, so you can not only get it for a song, but you can also play it without wearing out a genuine priceless artifact from the dawn of tabletop role-playing. Check it out!