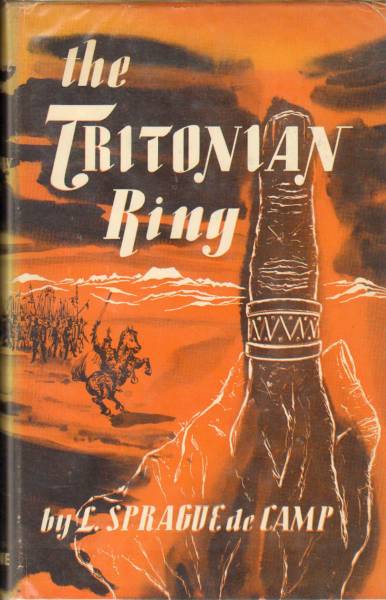 This is a guest blog post from Richard who has contributed a few items over the years. I looked at L. Sprague de Camp’s “The Stronger Spell” a few weeks back. Richard has recently read or re-read the stories in the series and has an opinion:

L. Sprague de Camp’s discovery of heroic fantasy through reading Gnome’s CONAN THE CONQUEROR in 1950 had two distinct consequences. The first was of course the Gollum like pursuit of his precious Cimmerian loot, an endeavour which would keep him happily occupied for the rest of his days. But the second was the inexplicable urge to write something of his own in the same vein. I say inexplicable because nothing in either his character or his previous work advocated itself to an artistic expression of that nature. The result, as Morgan has already explained in a previous post, was THE TRITONIAN RING and the smattering of related 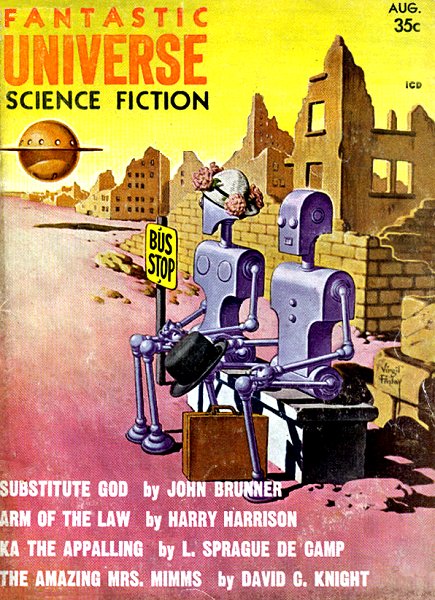 Pusâdian stories which he published in various periodicals during the 1950s, with a couple of belated additions appearing twenty years later during the sword and sorcery revival of the mid 1970s. The novel has been much reprinted over the years but the short stories have hitherto never been collected. It isn’t particularly difficult to understand why. Simply put they are god-awful.

The only reason the stories remain relatively easily available to read is because De Camp’s obliging old cohort Lin Carter demonstrated an indefensible fondness for them and conserved four of the travesties in the otherwise admirable series of fantasy anthologies he compiled throughout the 1970s. The lame humour and daft and doddering characters found therein being very much in keeping with Carter’s own inane brand of fantasy. 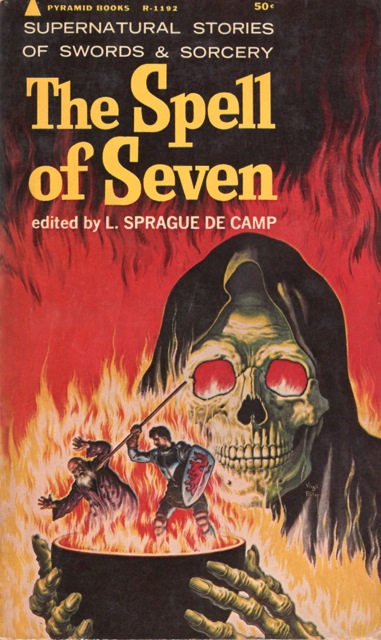 Each one of the stories is a shambolic mishmash of absurd and contrived situations, slapstick action – pole-vaulting with pikestaffs for example – inconsistency, coincidence and self-contradiction, all undertaken in the company of a cast of dim, venal and unsympathetic characters; all of whom incidentally are either con-men, chancers or charlatans. The urge to debunk prevailing notions appears to have been so  deeply ingrained in De Camp’s nature that he was incapable of treating heroism seriously even in fiction.  For him the hero might well wear a thousand faces but he only ever had the one pair of feet and they were made of clay. 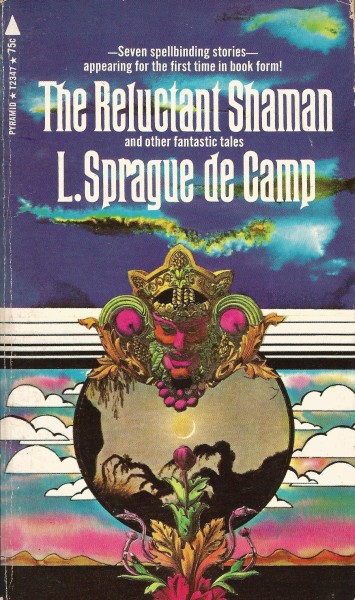 The Pusâd stories centre mostly around the antics and misadventures of two different characters, a workshy court magician called Derezeng Tâsh and a wandering huckster named Gezun Lorska. Gezun is ostensibly the Conan surrogate for the series but a Conan reflected in the distorted mirror of De Camp’s own scepticism. So even though Gezun looks the part he is a hollow effigy of a hero; one with Conan’s craftiness, belligerence and rude ethics substituted with gormlessness, ineptitude and cowardice. Gezun occupies his time by attempting to fleece the gullible, impregnating love struck women or fleeing from his creditors, all the while essaying a blithe deluded optimism that would put even Mr Micawber to shame. 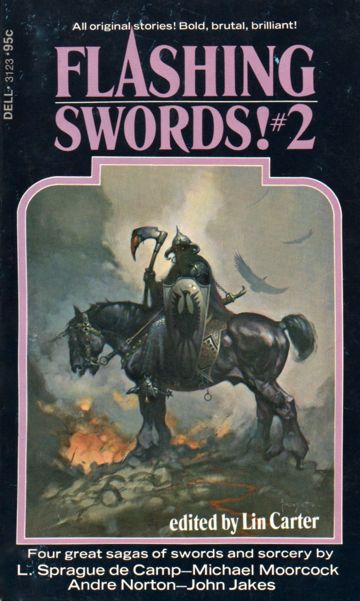 mail even though he is unable to read and so deluded that he believes a haircut renders him unrecognisable in a hostile city where he towers head and shoulders over the natives. De Camp clearly intended these character defects to be the endearing affectations of an amiable oaf. But they aren’t remotely endearing and are instead relentlessly irritating. Gezun is one of those characters whose exploits one follows in the fervent hope of seeing him beaten to a pulp at some point.

But societies breed the heroes they deserve and on the evidence De Camp provides the Pusâdian world appears to be entirely populated by imbeciles. In the story “The Eye of Tandyla” a duplicitous royal consort cannot recognise the famous jewel of the title even though it is found in her homeland and she is the one who has connived to have it stolen. In the same story sentries are lured away from guarding regalia by someone pretending to strangle themselves. In “Ka the Appalling” an entire city is duped into believing a hitherto unknown god is returning to the world by the excavation of a fabricated prophecy. 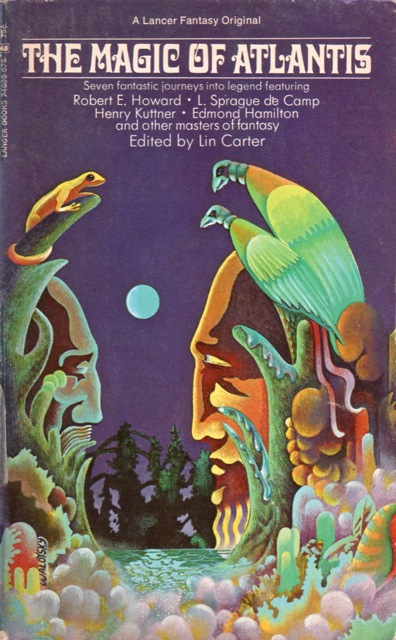 Clearly, whatever their inspiration, these are not slavish imitations of Robert E Howard and equally evident is the fact that De Camp had no intention of them being taken very seriously. But even qualifications of this sort do not excuse how badly written the stories are. The plots are farcical and crudely constructed, the fight scenes risible with swords literally going “Clang! Clang!”, while the texts are replete with cod archaisms and facetious word usages like “bronzen” and “coolth”. Rather than convey the intended sense of antiquity contrived language of this sort merely feeds the impression of a writer for whom English is a second and uncomfortable tongue.

And what on earth is one supposed to make of clumsy metaphors of this ilk:

“The cold in the room was as if an iceberg had walked in….”

The irksome thing is that if Howard had ever generated such a crude example of ham-fisted prose De Camp would have been the first to seize upon it as further evidence of Howard’s supposed haste and carelessness and slapdash style, all of which he was wont to do in his sweeping Olympian judgements upon Howard’s perceived deficiencies.

Credibility and consistency, both qualities De Camp prided himself upon, are in strangely short supply in these efforts. Take the rings forged from meteorites for instance which act as sorcery repellents in the Pusâdian world: artefacts so scarce and potent according to one story that they are the preserve of kings, but in another so innocuous and commonplace apparently that the magician Sancheth Sar can afford to gift a spare to a slave boy.  In the story “The Owl and the Ape” we are asked to swallow the idea that a building project could be commissioned purely in order to distract a passing Gezun so that his pocket can be picked. And don’t ask me to explain why a cannibal should choose to take up residence in a ruined wizard’s tower. Or how the cul-de-sac Gezun flees down just happens to have a secret tunnel required for him to escape a hostile mob. Artifice and contrivance of this sort abounds in the series and each instance seems to trump its predecessor in preposterousness. 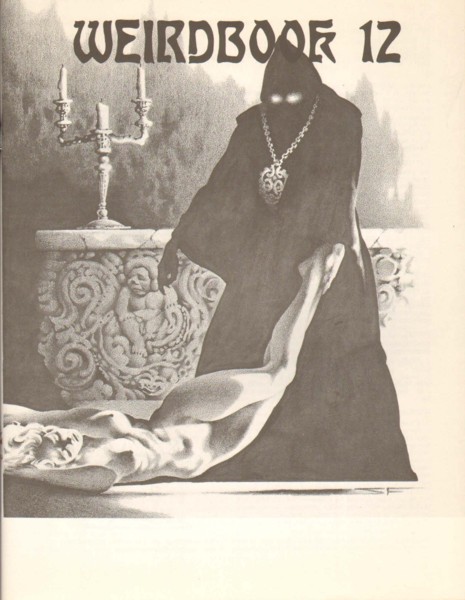 Perhaps none of this would matter very much if even one of the stories was half as witty and amusing as De Camp believed them to be. But with the exception of some acerbic laughs provided by ancillary characters such as King Vuar’s most insolent page the supposed humour is forced, flat and feeble. Never more so than when Gezun’s personality is transferred into the body of a bull with predictably slapstick consequences.

When all is said and done the Pusâd stories amount to little more than a silly and inconsequential footnote in the development of modern fantasy. But for anyone with an interest in understanding why the De Camp/Carter Conan compotes are quite so indigestible then herein may be found their stewed ingredients.