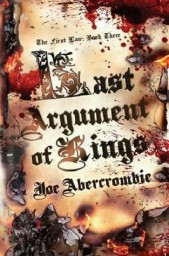 Current fantasy by the big publishers can be roughly divided into either estrogen or scatology. Estrogen is female oriented and about getting in touch with your feelings.  See Carries Vaugn’s “Strife Lingers in Memory” for a prime example. Scatology is the obsession with body fluids and functions with the idea that it is “keeping it real.”

Joe Abercrombie is part of the latter group. Last summer I read the intermediate volume, Before They are Hanged in the First Law trilogy. The first volume, The Blade Itself introduced the characters and gave the set up for the second book. Before They are Hanged had a quest with some of the main characters searching for some ancient weapon to defeat the evil Dark Lord. The quest was ultimately unsuccessful which begs why bother with the storyline? Part of the novel also dealt with the inquisitor Sand dan Glotka who directed the defense of a city under siege by the pseudo-Moslems in Abercrombie’s world.

Last Argument of Kings is the resolution volume. Abercrombie’s writing has improved a little. There are fewer sentences with difficult syntax.

The war in the north that broke out in the second book is one of the story lines with resolution. The action switches to the Union where the king has died. A monkey wrench is thrown in to the election when Bayaz the Magi introduces Jezal dan Luthar as the bastard son of the late king.

Luthar is a vain, self-centered character that is like most of Abercrombie’s characters, unlikable. He does undergo some transformation during the second and into the third book. He actually tries to be a good king and not the puppet of Bayaz.

The novel and the series in general run the risk of being overshadowed by the character of Sand dan Glokta, the deformed inquisitor. All through his scenes, he had snarky and sarcastic remarks going through his head. In one scene, where the spunky amazon character starts beating the crap out of him, he is making comments that make you laugh.

Abercrombie has good action scenes. One thing that perplexes me is Logan Nine-Fingers uses a crude muzzle loading pistol in the first book. All references to gunpowder disappear after that. The Union’s forces use a lot of crossbows.

There is a big climax with the pseudo-Moslem hordes at the gates of the capital city with a sorcerous fix. Some loose ends are dealt with for another fifty pages and it is not going to be to everyone’s liking. A friend of mine was infuriated with the ending of the book. I wasn’t surprised at all.

Abercrombie is a writer with some ability. He is working in George R. R. Martin territory though he is able to finish his series while Martin cannot. Joe Abercrombie has recently moved into young adult territory. One friend of mine does like his new books. I will eventually get around to giving them a try though it is not at the top of my list right now.