Legend of the Galactic Heroes: Dawn 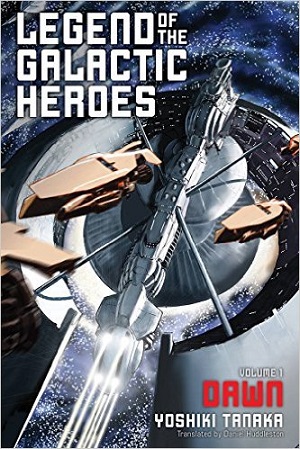 In the wake of the Death Star’s destruction in 1977, a renewed hunger for space opera swept across not just the United States, but the entire world. In Japan, this demand was met by such classics as Mobile Suit Gundam and Super Dimension Fortress Macross, as well as a slew of imitators. But the crown jewel of 1980s Japanese space opera was Yoshiki Tanaka’s Legend of the Galactic Heroes, a ten novel series following two master strategists as they navigate the fall and rise of star nations. Unlike Gundam and Macross, though, neither the novels nor the equally legendary anime adaptation were available in English for over thirty years. Fortunately, Viz Media through its Haikasoru imprint remedied this in 2016 when it translated the first volume, Dawn, allowing English readers their first chance to engross themselves in one of the most renowned space operas in the world.

A brash young count from the Galactic Empire invades the Astarte system, intent on making a name for himself by wiping out the rebel Free Planets Alliance fleet stationed there. Overconfident, the alliance fleet attempts a triple encirclement, a strategy that has routed empire fleets in the past. This time, the count has prepared a clever stratagem, smashing into each of the pincer fleets one by one. With two fleets destroyed and the third dying around him, command devolves onto a quiet alliance officer. Using his encyclopedic knowledge of military history, this officer extracts the remnants of his fleet from the count’s trap, bloodying the Empire’s nose in the process. Unknown at the time, this was the first bout between Count Reinhard von Lohengramm and Commodore Yang Wen-li, the best minds that the Empire and the Alliance would field in the following galaxy-wide war.

Legend of the Galactic Heroes: Dawn is a study of contrasts. The Galactic Empire is a Prussian aristocracy that’s showing the strain of age and decadence, while the democratic Free Planets Alliance is led by short-sighted politicians chasing headlines for political power. Reinhard von Lohengramm and Yang Wen-Li are counters to each other. Brash Count von Lohegramm is a maneuver specialist in the vein of a Napoleon or a Patton, with ambitions to the throne. Reserved and private, Admiral Yang exercises his formations like a Chinese strategist, as studious and peace-longing as Zhuge Liang. Von Lohegramm’s strategic audacity is repeatedly blunted by Yang’s tactical brilliance in the retreat, while Yang’s strategic trickery is often rendered ineffective by von Lohengramm’s bold thrusts. Both admirals are treated sympathetically, with the differences in the rivals’ personal and professional aims driving the drama as their two nations start to fall apart.

The space combat in Legend of the Galactic Heroes remains at the strategist’s level, as the commander of each fleet gives orders for his formations. Rather than the 1980s mainstay of fixed cubes of stationary battleships volley firing at each other, the formations of thousands of ships maneuver and wheel about like cavalry. In fact, the descriptions of the battles are reminiscent of the land battles described in the Chinese classic, Romance of the Three Kingdoms, with several of Commodore Yang’s gambits echoing the ruses of those Chinese strategists.  Also, von Lohengramm and Yang both use strategies influenced by Sun Tzu’s Art of War. Legend of the Galactic Heroes is the rare space opera that patterns itself after land warfare. Naval combat mainstays such as crossing the T are nowhere to be found. The battle between chessmasters might feel sanitized compared to the recent trend of death-cam narration focusing on doomed individuals, but, make no mistake, the worst battle defeats in a Honor Harrington battle come nowhere near the losses that the Empire and the Alliance regularly inflict on each other. And as the two star nations bleed, battlefield realities drive government policies, which in turn affect the strategists’ aims.

The translation aspires to the current trend of transparent prose, occasionally waxing poetic when voicing the nobles of the Galactic Empire. It continues the growing emphasis on English readability by translators of Japanese pop culture stories. That said, a second translation team could have been used to translate English into milspeak. Count von Lohengramm would not attack into the “back end” of a formation, and the ever-composed Commodore Yang would not command a orderly retreat under fire with “run away.” However, the sweep of the adventure is grand enough to forgive the occasional moment where military bearing gets lost in translation.

At times, however, Dawn no longer reads like a novel. Instead, the frequent digressions into Imperial history give it the feel of a war annal, annotated with commentary by an anonymous historian. While the digressions do flesh the context to the conflict between the two nations, the interruptions do disrupt the flow of the narrative. It takes some getting used to, but at least Tanaka will devote a mini-chapter to the digression instead of interrupting a key scene with backstory. Hopefully in later books, he will manage exposition in a more skillful manner.

Legend of the Galactic Heroes: Dawn delivers the strategic acumen and political intrigue of the Honor Harrington series without the books of endless pages that have become the hallmark of long running space operas. Even with Dawn’s digressions, the currents of history briskly sweep Reinhard von Lohengramm and Yang Wen-Li from battlefield and backroom deals towards their ultimate fates. Whether that will be death in the heather or life on an Emperor’s throne remains to be seen.

The first three volumes of the novel series have been released, with volume 4 scheduled for release on June 20, 2017. A new anime adaptation by Production I. G. is also expected to be released in 2017.