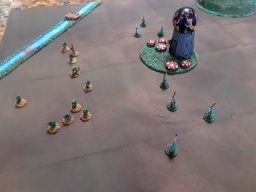 The primary focus of my contributions to this, the best darn science-fiction and fantasy blog on the internet, have been to search out and find the hidden gems of independently published sf/f novels for you to add to your growing “wish I had time to read it all” stack of titles.  My initial role as a blogger was to fill space on Wargaming Wednesday’s, and this week we’re going back to those roots with a post months in the making.  As a family man, audiobook voice talent, and author in my own right, finding time to game is a constant battle.  It’s not the few hours of gaming, it’s the drive, setup, tear down, auditioning potential adversaries to make sure they aren’t complete neckbeared goofballs, and all the accompanying silliness that’s the issue.  In an effort to solve all of them in one fell swoop, I cribbed a page from the Castalia House blog’s own Scott Cole (see his solution here) and set about trying to find a way to play miniature wargames online.

That’s a taller order than it appears at first blush.  Consider that part of the pleasure of a miniature wargame is the tactile feel of the thing.  If you aren’t rolling them bones and pushing those pawns you might as well use Vassal.  Another important factor is the visual appeal and three-dimensional nature of the game.  How does a host capture that part of the fun while enabling a game between two players who live 12 time zones apart?  It’s easier than you might think… 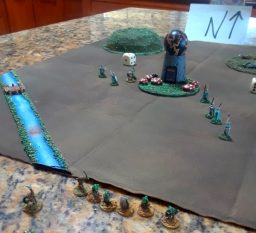 The notecard was used to establish North, which helped keep the players and the figures oriented

It took a little time and a little planning, but by using 10-mm figures, I was able to build four matching sets of miniature wargames complete with ground cloth, terrain, and figures for around twenty-five dollars per box.  (Shipping was the most expensive part of this little wargame project.)

Bear in mind that I had three opponents, so to ensure all could came with each other, they each needed their own set.  By going a little overboard on figures, but purchasing smaller scale figures from Irregular, one can easily purchase multiple factions.  My kits have enough figures to allow for elves, humans, orcs, and undead, with a few random monsters and characters to round things out.  To keep things simple, we use the “Song of Blades and Heroes”, which is a skirmish ruleset designed for quick fights with a minimum of figures.

As can be seen in the photo above the fold, our proof of concept fight pit seven highly motivated elves against ten savage orcs.  (That’s a 350 point battle, for those keeping score at home – a small one designed to teach my opponent the rules and to keep the game simple enough while we worked out the kinks of the tele-operated play.)  Although outnumbered and in many ways outclassed from a fighting perspective, the elves were able to use their advantage in motivation to hustle across the board and set the terms of the battle.  By refusing to face the orc’s heavy left flank, they managed to roll up the weaker right flank and force the stronger orcs to quit the field before they could do any damage to the fancy pointy eared lads.  The orc shown in the lower portion of the photograph to the right were either killed or failed morale checks.

So how did we play this international game?  Like so: 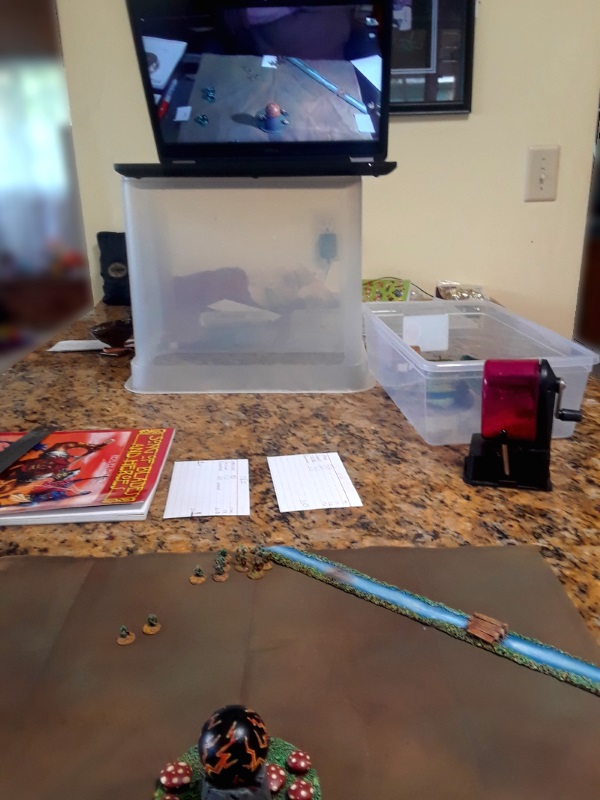 This is what the game looked like from Honolulu.  On screen, you can see what the table in Paris looks like

It really is as simple as it looks.  We set up our laptops at a slight elevation and used a Discord server to video-chat the gameplay.  The black sphere in the foreground is the top of a wizard’s tower reflected on-screen as a golden sphere.  (The sets aren’t completely identical.  The terrain items have a few cosmetic differences just to distinguish them from each other, and to personalize the kits a bit.)  As you can see, the cameras needed a little adjustment during the early game play to track the figure movement, but nothing too onerous, particularly late in the game when the maneuvering ended and things settled down to a straight brawl.

As figures are moved by the player with initiative on his table, the local player moves his own set to match.  Dice are rolled on camera or not, depending on how much trust you place in your opponent, and distances are…rough.  The early confusion about whether the cameras invert the image, and whether the on-screen image should be a mirror or not, was solved by clearly demarcating the north side of the table, so that all directions could be given as compass directions, and whether the cameras showed mirrors or not quickly became irrelevant.  As you can see, my opponent helpfully put cards down (the white squares on his mat) for east and west, too.  He’s a geography guy – they take details like that very seriously.

Unlike Scott Cole’s setup, which used a hex mat to enable precise movement and avoid any confusion about locations and figures, the system we used resolved those issues through basic human decency.  For our game, Team Paris unilaterally declared the Honolulu Table to be the official table in the event of any disputes, but players could easily use the 50/50 rule to resolve them as well.  This makes for a game suitable for two good friends for whom winning the game takes a back seat to playing the game, and is not recommended for competitive or tournament play.

One happy coincidence that arose was the existence of the crease lines in the fabric drop cloths.  It turns out by folding them twice over in each direction, the creases provide a nice point of reference for those wide open spaces.  One could place markers or paint coordinates that serve the same purpose, but as a “visual appeal uber alles” kind of wargamer, I couldn’t bear the thought of marring the battlefield with such marks.

There you have it.  Why build one set when you can build four?  Why game with local chumps when you can game with international friends?  All it takes is a little time, a little planning, and a lot of faith in your opponent to not be a raging jerk.  Which, let’s face it, if he is…why are you gaming with him at all.  The game was so enjoyable, you can expect to see a few proper battle reports, and with any luck, you’ll read about the exploits of Team Britain and Team Pittsburgh as well.