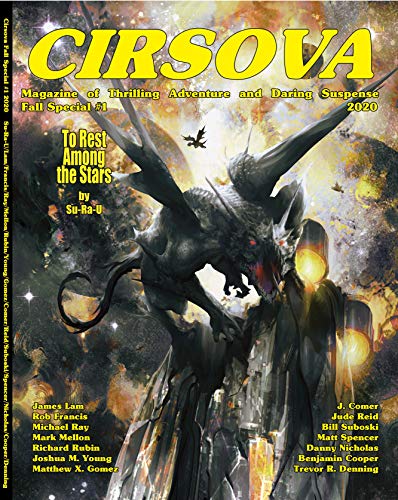 As the air chills and the leaves turn, and the lengthening shadows of Halloween creep across the fields, it is time again for the newest issue of Cirsova. Leading off the 2020 Fall Special is Mark Mellon’s “Melkart the Castaway”, a tale of wine-dark seas and of the men whom legend would turn into gods.

After a captive Triton smashes his ship, Melkart awakens on the island of Candia (Crete), a captive of the Despot Hermes Trismegestius and his Spartan guard. Melkart wishes to return home to Tyre, but Hermes would instead chain the Phoenician Hercules to a grinding mill. Outraged by such bestial treatment, Melkart escapes, and with the help of an outcast, prepares to free the helot slaves and Candia from the Despot’s yoke.

Readers familiar with Classical literature will recognize certain phrases from antiquity. Sometimes these become a distraction, as remember which story a certain phrase came from does remove the reader from Melkart’s struggles. But the first use of “Wine-dark sea”, uttered just before the introduction of the Greek setting and characters, was a masterful touch, informing the reader of what is to come with subtlety and cleverness. And the old stories inform this one, as Melkart must face off against a Minotaur for his life. For a story filled with what the Classical Greeks would treat as demigods, Mellon takes a more naturalistic approach. Monsters do exist, but the power of those who bear the name of gods is in strength, sinew, and craft.

The prose sits in a middle area between the richness of classic sword and sorcery and contemporary transparency. Mellon has an eye for good and unique details, but the presentation thereof tends to settle into disjointed lists. However, when Melkart springs into action, that awkwardness sloughs away, and it is easy to swept up into the feats of strength and wits needed for Melkart’s escape. At the conclusion, when Spartan arms clash against the Phoenician’s and his helot uprising, anything else is forgotten.

And it wouldn’t be a proper tale of thrilling adventure and daring suspense without a hint of romance.

“Melkart the Castaway” serves well as the leading story for the newest volume of Cirsova, and I would like to read more from Mellon in this vein. As for the rest of the stories in Cirsova‘s Fall Special, check back here midway through next week.