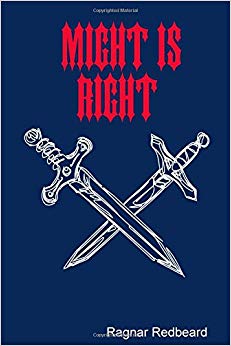 “If a man smites you on one cheek, smash him on the other.”- Ragnar Redbeard

Darwin’s theory of evolution caused a revolution of thinking including forays into popular culture. Evolution caused a some to rethink European man’s position in the world. The grip of the alien religion of Christianity began to slip some. One book that took direct aim was Might is Right by “Ragnar Redbeard.” First editions are listed as from the year 1896 though these might have been vanity press or typewritten copies for sale. The book was advertised in 1905 which is where it probably began to reach a wider audience.

The book reads as an everyday man’s Nietzsche and Darwin adapted for politics. It reads more as a bunch of individual quotes and sayings cobbled together than as a coherent text.

The book starts out with:

“A man’s opportunities are never exhausted so long as other men (who are not his friends) possess millions of acres and thousands of tons of gold.”

“The Natural world is a world of war; the natural man is a warrior; the natural law is tooth and claw. A condition of combat everywhere exists.”

“The victor gets the gold and the land every time…Why should it be otherwise?”

The themes of physical superiority and a rejection of Christianity run through the book.

“Behold the crucifix, what does it symbolize? Pallid incompetence hanging on a tree.”

“I gave into the eye of your fearsome Jehovah, and pluck him by the beard–I uplift a broad-axe and split open his worm eaten skull.”

“Christ was indeed, the prophet of the credulous rabble during three years of active agitation, and it abandoned him in his hour of need for the rabble is ever cowardly, ungenerous, suspicious, unfathomably base. After permitting Christ to be butchered, the mob thereupon set him up as their Divinity, and erected altars to his renown. Slaves, women, madmen, lepers, magdalenes, were the earliest Christians, and to this hour, women, children, slaves and lunatics are the raw material of the Christian Church.”

The morality of civilization is attacked and mocked:

“This his mind is sterilized by authority before it has had a chance to mature. Thus youth is mentally castrated, that its natural vitality may be afterwards used up in the yoke of custom–which is the yoke of slavery.”

A section of the book is dedicated to demolishing democracy, constitutionalism, and politicians.

“Modern ‘leaders of thought’ are almost wholly wanting in originality and courage. Their wisdom is foolishness, their remedies poison.”

“Our clean skinned ‘heathenish’ ancestors with all their vital forces unimpaired, were really the nobler type of animal. We on the other hand, with our corrupt, irresolute, civilized hearts, our trembling nerves, our fragile anaemic constitutions, are actually the lower viler type.”

“Eternal battle is the main condition upon which man holds his life tenure. When his enemies are beneath his heel, that is life, honor, success.”

Ragnar Redbeard has opinions on females:

“Women are frail beings at the best of times and in their secret hearts are probably lovers of the unlimited. For the welfare of the breed, and the security of descent, they must be held in thorough subjugation.”

“A women is two-thirds womb. The other third is a network of nerves and sentimentality.”

“Women of vanquished races are usually very prone to wed with the men who have slaughtered their kindred in battle.”

These quotes give you an idea. Who was “Ragnar Redbeard?” There was a rumor that Jack London wrote the book. It reads too extreme especially considering his socialism. Arthur Desmond has been pointed to as the culprit, a New Zealand born rapscallion who periodically fled from place to place when he became unwelcome. He also dabbled in worker socialism, so the tone doesn’t fit unless he underwent a radical change. We will probably never know who wrote the book. It is a work of extreme anarchism. Another take is this book is satire, which is possibly the most likely answer.

There is little information on how much impact Might is Right made.