So, you have heard about military fantasy and thinking of writing some of it yourself. Hey, all you need to do is write about sword, spears, and spells, right? Yes, but there is more to it.

If you are going to write military fantasy, you better put some emphasis on the military part of it. Having some knowledge of pre-gunpowder military history could vault you into the front ranks of this potentially big genre.

History: I have gotten the feeling that some writers may not have the greatest grasp on history. Some just can’t be bothered with those dates, empires, and personalities. A solid foundation starts with knowledge of history.

H. G. Wells’ The Outline of History is very good primer. At one time, every used bookstore had copies of the two volumes revised edition. You might even see the original four volumes set here and there. Wells had a great writing style and some nice insights. Some are politically incorrect by today’s standards which make them all the more valuable:

“The Jews looked for a special savior, a Messiah, who was to redeem mankind by the agreeable process of restoring the fabulous glories of David and Solomon, and bringing the whole world at last under the benevolent but firm Jewish heel.”

Herodotus, The Histories: A good place to start if you are thinking of a Classical Greek like world. There is info on the Scythians, Phrygians, the rise of the Persians, and the Greek-Persian Wars. The Father of History.

nature that people despise those who treat them well, and look up to those who make no concessions.” That long drawn out war had both sides attempting to find some way of breaking the gridlock. No Greek army could match the Spartans in the field. The Spartans did not have a fleet to hurt the Athenians until the last chapter. There was experimentation with light infantry, javelin men, and cavalry.

Gaius Julius Caesar, The Gallic Wars, Civil War, and Alexandrine, African, and Spanish Wars: I have a hardback with all of the above. Some writers are drawn to pseudo-Roman backgrounds. The book if you want to write about civilized vs. barbarian armies.

Tacitus, The Agricola and Germania: More contemporary accounts of barbarian warfare in Britain and Germany.

Plutarch, Lives: Not so much military but on military personalities. Great source if you want to base any characters on Pyrrhus of Epirus for example.

Flavius Vegetius Renatus, The Military Institutions of the Romans: The only Roman military manual that survived to this day. Heavily used in the Middle Ages right up to the Enlightenment. There are sections on the proper use of the sword, javelin, sling, bow etc. Very nuts and bolts but useful.

Procopius, The History of the Vandal, Gothic, and Persian Wars: We are getting into downright medieval warfare here. Procopius is a favorite of mine. He has descriptions of Hun auxiliaries attacking Vandal cavalry and scattering them, Goths picked off at the siege of Rome, and descriptions of Sassanid Persian cavalry. 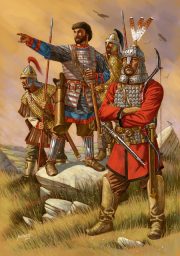 Paul the Deacon, History of the Lombards: Barbarian history from the perspective of the barbarians. The Lombards battled Heruls, Gepids, Avars, and Byzantines. Lots of political intrigue present also. I have thought of 7th century Italy as a great setting for a series of stories.

Gregory of Tours, History of the Franks: Similar in tone to Paul the Deacon. The Franks were a very successful Germanic barbarian tribe as the state they set up on Roman territory is still with us.

Geraldus Cambrensis, Topography of Ireland and Journey Through Wales: Gerald saw Welsh arrows stuck in Norman castle doors. He also saw the Irish had taken up the 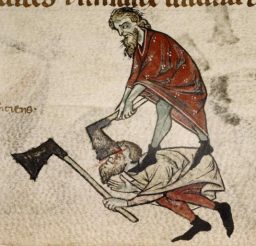 Viking axe with a vengeance as their main weapon.  Great first hand accounts of Celtic guerrilla warfare in the 12th Century.

Geoffrey de Villehardouin, Chronicle of the Fourth Crusade and the Conquest of Constantinople: An eye witness account of the Crusade gone wrong. A pretender to the Byzantine throne sidetracked the Crusaders to restore him. The Crusaders did their job, not paid, and then took the city and put one of their own on the throne.

There are probably more, Sun Tzu for example. Feel free to comment to add to the above list.

Gamers, these contemporary histories and first hand accounts are of use to you also.