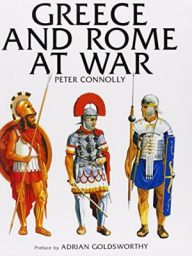 Mark Twain said that history does not repeat but it does rhyme. That can be used to advantage in writing military fantasy. I covered some contemporary histories a few weeks back.

A good source for material is retrospective histories.

The Book of the Sword (1884) by Richard F. Burton was supposed to be the first book of three. Unfortunately, he did not get the other two written. I have a Dover trade paperback of this. The book is wide ranging with discussion of the sword in various places in history. He also has some areas devoted to metallurgy.

If you have an interest in chariots, Arthur Cotterell’s Chariot (2004) is the most detailed history I have ever seen on the rise, use, and fall of the chariot.

A good book on archery and warfare is Arrows Against Steel by Vic Hurley. I read this from the library that unfortunately no longer has the book.

Peter Connolly’s Greece and Rome at War (1981, 1998) is a big hardback on glossy paper with great illustrations. This book goes from 800 B.C. to 450 A.D including Greece, Macedon, Italy/Rome, and the Roman Empire.

Connolly covers weapons, armor, and tactics. I can’t recommend this book enough. If there is a better book, tell me about it.

Victor Davis Hanson goes into hoplite warfare in A War Like No Other (2006). This is his history of the Peloponnesian War. Hanson’s Carnage and Culture (2002) goes into the Western way of war. Also recommended.

Charles Oman: The Art of War in the Middle Ages. The granddaddy book that influenced generations for good or ill. Originally published in 1885, you can download it from 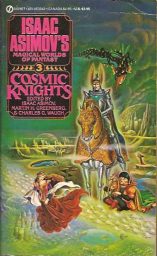 Archive.org. I have a digest hardback. Oman is one of the originators of the idea of the big, dumb knight.

Isaac Asimov continued the idea in this introduction to Cosmic Knights (Avon, 1985):

There are words that reek of romanticism, and “knight” is one of them. Yet its lineage is rather low. It is from the Anglo-Saxon cniht, which meant “boy” or “attendant.” He was someone who attended his master and waited upon his needs. The German homologue, Knecht, still means “servant” today…Actually, however, the romantic glow that makes knights seem so wonderful is totally a matter of fiction. In actual fact, knights, presuming on their horses and armor, were arrogant and insufferable in their behavior, especially to people unarmed and on foot. In English, we have another word for “knight”–“cavalier” (usually used for the arrogant fools who fought for King Charles I)–and we all know what “cavalier treatment means…The very word “infantry” is akin to “infant” and is another word for meaning “boy.” The term is a measure of the contempt held for the foot soldier by the aristocrats…In this the lower classes were greatly aided by that inevitable accompaniment of arrogant aristocracy–invincible stupidity.

It is not history, but myth and legend, yet it fascinated its readers, who then, as today, would rather have history appeal to their superstitions and patriotism than to any abstract and bloodless passion for truth.

Asimov was engaging in some culture of critique more than a meaningful introduction.

A good revisionist history is R.C. Smail’s Crusading Warfare (1956) which shows the medieval armies were more sophisticated than what Oman portrayed.

Harold Lamb is a favorite pulp magazine writer of mine. He went on to write books that were a mix of biography and novel. His Genghis Khan stresses the discipline imposed on the stepped nomads by Temujin. There is a no more dangerous army than barbarians inured to hardship given weapons and discpline. Lamb’s book on Tamerlane is also recommended. My all time favorite history by Lamb is March of the Barbarians (1940). Lamb covers the first horse riders to the Manchus. 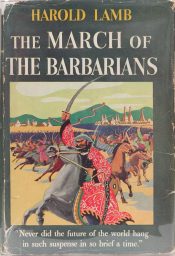 Rene Grousset’s Empire of the Steppes (1970) is a good follow up to Harold Lamb for something newer.

James Chambers’ The Devil’s Horsemen (1979) concentrates on the Mongol attack into Eastern Europe. It is a short book at 168 pages but very readable.

Richard Fletcher was a specialist in Moorish Spain. The Quest for El Cid (1989) is a good place for the middle Middle Ages.

A good book for northwest European warfare is G. A. Hayes-McCoy’s Irish Battles: A Military History of Ireland (1969). Hayes-McCoy covers the period from the Battle of Clontarf (1014) to Battle of Arklow (1798). You can learn about galloglachs, kerns, and Norman knights among other things. I have a Barnes & Noble reprint of this book.

Fletcher Pratt is generally remembered as the author of The Well of the Unicorn. He did a fair amount of writing about military things. The Third King (1950) is the historical background for Unicorn. The Third King concerns King Valdemar of Denmark who rid Denmark of German nobility who in the process of turning the country into a German colony. I also recommend The Battles that Change History (1956). This is on Gutenberg Canada.

The Late Byzantine Army (1992) by Mark C. Bartusis is a joy to read. He covers the Byzantine Army from the Fourth Crusade in 1204 A.D. to the Fall of Constantinople to the Turks in 1453. He goes into equipment, units, campaigns etc. 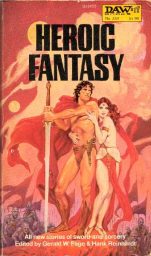 I never got into oriental history that much. The best samurai story I have ever read was “Ghoul’s Head” by Don Walsh in the sublime Heroic Fantasy (D.A.W. Books, 1979). Get that book to read the pieces by Hank Reinhardt on armor and swords. Reinhardt also wrote an incomplete book on swords and a book on knife fighting.

Secrets of the Samurai by Oscar Ratti & Adele Westbrook (1973) had a Barnes & Noble reprint in 1999. There always used to be stacks of this book in the remaindered section. I have it but must admit to not reading it. Looking through it, I must say it appears to be comprehensive on weapons, armor, and martial arts.

Poul Anderson wrote a piece “On Thud and Blunder” for Swords Against Darkness III (Zebra Books, 1978) and reprinted in Fantasy (1981). Anderson warns against some of the pit falls neophytes can make.

Osprey Men at Arms: This series has come a long way from its inception. A friend of mine sent me some early booklets including one on Medieval Armies. That is a lot of territory to cover in one booklet.  Now, they have books on the Picts or the Battle of the Catalaunian Fields. If you are thinking of modeling a story on a specific time or place, it would behoove you to spend the money on the Osprey booklet. I have an ever-growing spot on one bookshelf of Osprey booklets. The older ones have 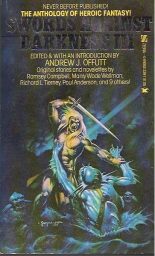 illustrations by the late and great Angus McBride.

There are books I no doubt forgot to include or did not know about. Feel free to expand in the comments section.