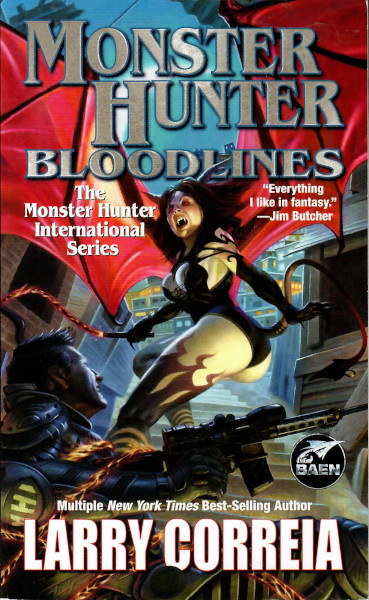 Monster Hunter Bloodlines by Larry Correia is the ninth novel in this popular series. Baen Books published the hardback last year, the paperback just came out a couple months ago.

The novel starts out with the crew from Monster Hunter International watching a deal for a Newton Ward Stone so they can get their hands on it. Things go wrong between snake cultists, the Federal agents of MCB, and the rogue former Federal agent Stricken. Things go haywire when a shape shifter absconds with the ward stone while the Feds raid the premises.

What follows is tracking the stone and rescuing the half-human and naive shape shifter from a particularly nasty supernatural bounty hunter, a Drekavac. A Drekavac is from South Slavic mythology. You can put it down but it keeps coming back and each time stronger.

There is an interlude with a lich who is put down periodically by MHI.

A good portion of the novel is how to deal with the Drekavac. An impressive amount of firepower is used on it as it assaults MHI Headquarters.

Stricken has a succubus aiding him as he transports Sonya the shape shifter and narrator, Owen Pitts to South America. A Great Old One is present taking over territory up in the hinterlands of the Amazon. Pitts is needed as he is one of the Chosen.

Monster Hunter Bloodlines moves right along for 426 pages with periodic gun play, a little knife fighting, and some explosives. The novel ends with the issue of taking out two warring Great Old Ones left to the next novel.

I have written in the past about what I call The Curse of Unknown. Editors have liked publishing Thorne Smith influenced fantasy of the humorous sort but not enough readers have. The magazines never last long. Correia has managed to break the curse by turning it into an action series. There are elements of Bewitched and I Dream of Jeannie with orc baby sitters and trailer park dwelling elf queens but there is action and violence. This is L. Sprague de Camp for the modern age. Is Buffy the Vampire Slayer an influence on the Monster Hunter International series? I don’t know. The series is popular enough that Larry Correia has been able to buy a mountain.