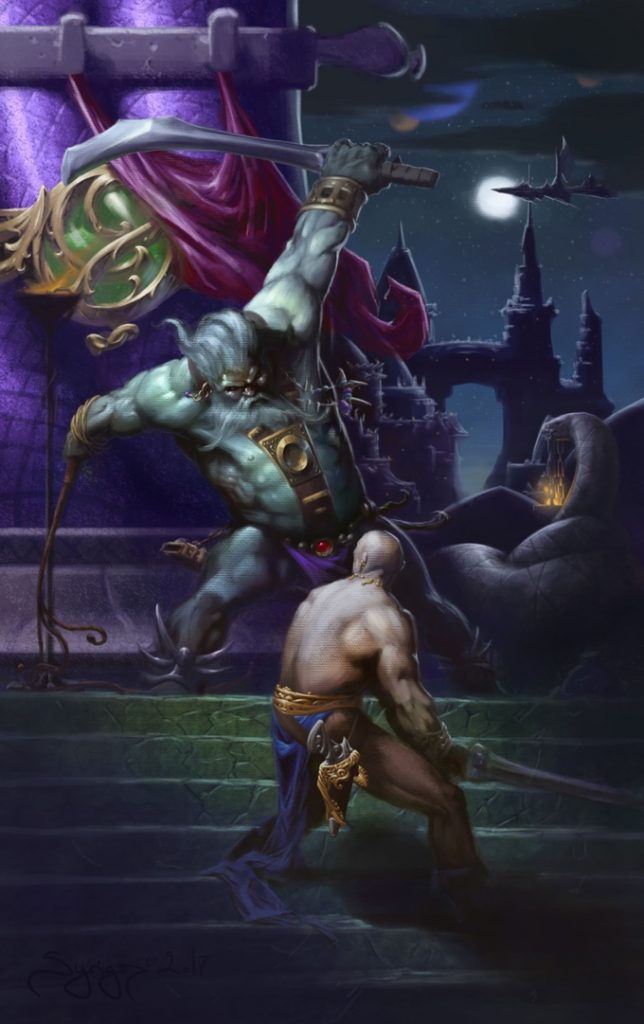 A lot of people have asked me what “Appendix N: The Game” would look like. I usually just joke that we already have one: it’s called Advanced Dungeons & Dragons first edition! The thing is, people have been arguing about this for decades. Open up early issues of The Dragon and you’ll find longwinded letters from people explaining how the game got this or that wrong from the source literature. Heck, the independent rpg design scene was arguably launched with an attempt to answer this question via Ron Edwards’s Sorcerer & Sword. But wouldn’t it be nice if someone took the time to seriously look at how to tune up the old style game with an eye towards how things actually work in all those old books that are nothing like the fantasy ethos that tabletop gaming had a hand in creating?

Well it’s happening with Autarch’s new Heroic Fantasy & Barbarian Conquerors Collection Kickstarter. And this is such a monumental task that it can’t fit within the pages of a single tome!

Here’s a rundown on what they’re going for with the Heroic Fantasy Handbook:

What do we mean by “heroic fantasy flavor”? It’s the flavor that J.R.R. Tolkien and Robert E. Howard have in common, once you remove what’s different. Tolkien and Howard are usually considered opposites – high fantasy versus swords & sorcery, British versus American, literary versus pulp, and so on. But if they are opposites, they are opposite faces of the same coin, and that coin is heroic fantasy. Their worlds have more in common with each other, and with those of luminaries such as E.R. Burroughs, Clark Ashton Smith, H.P. Lovecraft, and Michael Moorcock, than with any of their contemporary epigones. Heroic fantasy is set in a world like our own world, one that might even be our world, in its distant past or far future. Its heroes, though men and women of extraordinary talent and drive, have none of the “super-powers” now common in contemporary fantasy (especially games). They do not typically teleport, fly, shoot fire, or raise the dead. Magic in heroic fantasy is more subtle and nuanced than in contemporary fantasy. It works with what is, rather than creating what is not. A magician cannot teleport straight to his friend’s distant castle, though his whispered dreams might reach his friend across the black gulfs of space. A magician will not fling magic missiles, but he might call down lightning from a storm, or capsize a boat with a wave. Working magic might require lengthy ceremonies, terrible sacrifices, or the power of primeval places. And those who use magic risk corruption. Even the wisest can lose their mind, body, and soul if they tamper with dark magic. That’s heroic fantasy.

And here is how the companion volume differs:

While the Heroic Fantasy Handbook explores the classic heroic fantasy genre, Barbarian Conquerors of Kanahu embraces what might be called “barbarian fantasy” or perhaps “pulp fantasy.” Barbarian fantasy is an amalgam of three distinct but related genres. The first is sword & sorcery literature, exemplified by the likes of Howard’s Conan and Moorcock’s Elric. This genre counterpoises corrupt, decaying cities and empires with rough-edged barbarian upstarts. It contrasts the decadence of urban life with the vigor of those untainted by it. This might have been inspired by the fall of decadent Rome to the Germanic “barbarians”who set themselves as kings of its ruins, or even by Samson’s divine-inspired exploits against the urbanized Philistines.

The second is sword & planet, exemplified by Edgar Rice Burroughs’ Barsoom, a fantastic vision of Mars. This genre explores similar themes to those of sword & sorcery but does accept certain “science fiction” elements such as alien planets, radium pistols, flying craft, and other technological wonders. Sword & planet still follows the vision of a morally-ambiguous ‘outsider’ protagonist, archetypically an earthling on Mars, using his might to smash the decadent villainy of the local society.

The third is science fantasy proper. This book, however, presents a “science fiction” milieu closer to a fantastic setting once the outer trappings of starships and rayguns are stripped off it. This genre is exemplified by space princesses, dashing interstellar rogues, space combat which looks suspiciously similar to WWII air combat, and a relative disregard of actual science when it conflicts with the plot. The same tropes of the barbarian fantasy genre also apply here: it is easy to envision the mighty lost-world barbarian smashing through the ranks of raygun-wielding aliens with his massive sword, answering their advanced technology with his brute strength.

I gotta say… they totally had me at “space princess.” But disregarding science when it conflicts with the plot…? These guys know what I like!

Even better, this is for the game that I already play, have spent countless hours playing, and which I have run my best campaign ever with. I was so convinced that these guys were on the path to solving some longstanding open problems in fantasy gaming that I included reviews of their stuff in the appendices of my book.

So check this out. “Pink slime” fantasy is about be cut down at the source!