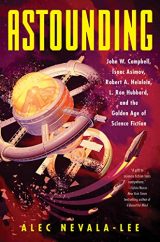 Astounding is the landmark account of the extraordinary partnership between four controversial writers—John W. Campbell, Isaac Asimov, Robert A. Heinlein, and L. Ron Hubbard—who set off a revolution in science fiction and forever changed our world.

Drawing on unexplored archives, thousands of unpublished letters, and dozens of interviews, Alec Nevala-Lee offers a riveting portrait of this circle of authors, their work, and their tumultuous private lives. With unprecedented scope, drama, and detail, Astounding describes how fan culture was born in the depths of the Great Depression; follows these four friends and rivals through World War II and the dawn of the atomic era; and honors such exceptional women as Doña Campbell and Leslyn Heinlein, whose pivotal roles in the history of the genre have gone largely unacknowledged. For the first time, it reveals the startling extent of Campbell’s influence on the ideas that evolved into Scientology, which prompted Asimov to observe: “I knew Campbell and I knew Hubbard, and no movement can have two Messiahs.” It looks unsparingly at the tragic final act that estranged the others from Campbell, bringing the golden age of science fiction to a close, and it illuminates how their complicated legacy continues to shape the imaginations of millions and our vision of the future itself. 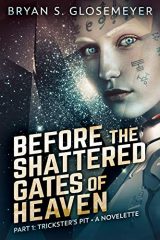 Deep in the subterranean Labyrinth of a cruel, alien world, a nameless girl has one chance to choose her fate, earn a name, and join the conquest of the stars:

Nine victories in the bloody fighting pits of the Divine Masters.

With eight kills behind her, she is one fight away from realizing her dreams. But what must be sacrificed, and what must she become, in order to survive the Trickster’s Pit?

Part 1: Trickster’s Pit is an action-packed novelette that introduces an exciting, new science fiction adventure through outer and inner space. 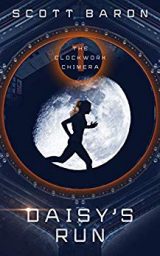 Life in deep space could be a drag sometimes, but Daisy supposed things could have been worse. They were still alive, after all, which was always a plus in her book. Now if only she could figure out who, or what, was endangering her return home, things would be just peachy.

With the powerful AI supercomputer guiding the craft beginning to show some disconcerting quirks of its own, and its unsettling cyborg assistant nosing into her affairs, Daisy’s unease was rapidly growing. Add to the mix a crew of mechanically-enhanced humans, any one of whom she suspected might not be what they seemed, and Daisy found herself with a sense of pending dread tickling the periphery of her mind.

Something was very much not right––she could feel it in her bones. The tricky part now was going to be figuring out what the threat was, before it could manifest from a mere sinking feeling in her gut into a potentially deadly reality. 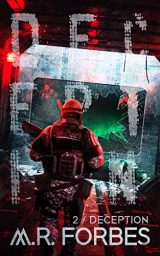 Somewhere in deep space, Caleb wakes from stasis, unprepared for what he discovers.

The Marines he was supposed to relieve are missing, something monstrous is roaming the corridors, the dead are rising, and the starship is inexplicably low on fuel.

Now Caleb is fighting time, desperate to find some way, any way, to overcome an impossible situation and get the colonists to their new home.

He’s also about to come to the most frightening realization of all:

They may have already arrived… 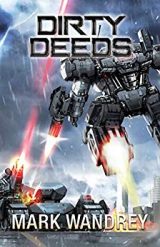 Abraham Murdock left his home of Sheridan Arkansas at seventeen to start a merc career that spanned almost 50 years, working for dozens of companies, killing aliens and getting paid across the galaxy.

Near the end of his career, he landed a gig with Cartwright’s Cavaliers. The storied Four Horsemen unit was just coming back from near catastrophe, and the battle-proven Murdock was an ideal choice for their top sergeant. It would have been a perfect last contract, but then his dropship was destroyed in the Chimsa system, killing the flight crew and him.

Nobody was more surprised than Murdock when he found himself alive. After weeks of surviving in a failing CASPer, floating in space amid the ruins of dead starships, he was rescued by an alien salvage crew.

Deciding retirement was the right call, he headed to Valais, a beautiful aquatic paradise not unlike the South Pacific on Earth. Warm sun, sandy beaches—peace and quiet. That is, until the alien mercs arrived, and he suddenly found himself back in his old trade, and up to his ass in the Omega War. What good is a 70 year old merc in a star-spanning war?

Never trust an old man in a career where most die young. Murdock isn’t quite done…yet. 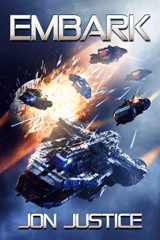 In the not so distant future, flight culture has replaced car culture. Two of Earth’s largest corporations now supply the planet with the technology and fuel to make air and space flight available to everyone.

Taft Gaurdia spends his weekends at an abandoned flying field, racing through the skies with his three best friends and the girl he longs to be with, Kaytha Morrow. After receiving a mysterious message from her deceased NASA-scientist father, Kaytha and Taft make a shocking discovery.

With Earth now suddenly facing a great disaster, a ruthless and power hungry enemy emerges. Unwittingly, Taft, Kaytha and their friends are thrust into the middle of humanity’s fight for survival and future among the stars. 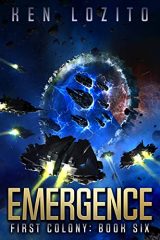 As the colony grapples with the realization that New Earth is not as uninhabited as they’d once thought, tensions between the colonial settlements rise to new heights, and the Colonial Defense Force finds itself caught in the middle.

When Connor uncovers evidence of a militant colonial faction secretly exploiting the NEIIS, he has to investigate. Connor learns that some of the colonial settlements have been holding back discoveries of their own. He’d thought the NEIIS were a threat to the colony, but he was wrong. They all were, and the truth is beyond anything Connor could have imagined.

Meanwhile, Colonel Sean Quinn’s latest mission brings him off-world to investigate a previously discovered NEIIS settlement. When all communications from home go silent, he must return to New Earth to investigate. Cut off from everything, Sean must lead the crew of a CDF warship against a mysterious foe. Sean must forge a path into the unknown if he’s to have any hope of unraveling the mystery. 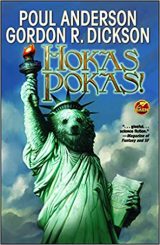 When a human thinks he’s Napoleon Bonaparte, it’s time to get out a straightjacket. But when a Hoka thinks he’s Napoleon Bonaparte, you’d better believe it! Particularly since there’ll be hundreds of other Hokas around who know for a fact that they’re the French Army, mon amis, even if they’re on another planet lightyears away from Earth, and the forces they’re facing aren’t the British but very nasty warlike aliens who by all reason should be expected to make mincemeat out of the Hokas.

But when it comes to Hokas, reason does not compute. These friendly, fuzzy aliens who resemble large teddy bears have a very vivid imagination and have never quite grasped the difference between human fiction and reality, or (in the present case), between past history and the much later and rather different present. Always bet on the Hokas. Even when a young lad and his Hoka tutor find themselves stuck on a planet where they seem to be scheduled to fulfill and ancient (and lethal!) prophesy that neither of them had ever heard of until now. Hokas as usual find that reality is merely optional and the good guys—and bears—always win, quicker than you can say HOKAS POKAS! 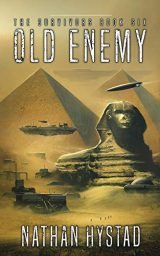 Dean Parker has brought his wife home, and he’s looking forward to relaxing and having a future with his family on New Spero. The Iskios vortex is gone, vanquished by the Hero of Earth, but unforeseen enemies linger in the universe.

The Bhlat send a warning to the humans, one that suggests the Kraski may not all be dead. All signs point to Lom of Pleva, a wealthy and very dangerous enemy to have.

Dean must unite with the Bhlat to fight against a common adversary, but when push comes to shove, can he trust them?

Join Dean and the others as they seek to save themselves from the race of beings that beamed them off Earth years ago, setting everything in motion.

Who do you turn to when everyone is trying to kill you? 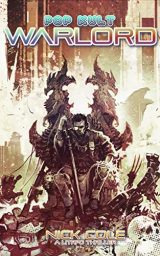 PerfectQuestion is back! He’s running and gunning his way across an incredible civilization-building game set on Mars. But this time he’s employed as an online ringer for a corrupt dictatorship and trying to avoid getting “disappeared” in a reckless world of intrigue, epic parties, sports cars, and women who are as dangerous as they are beautiful. 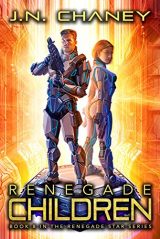 Shortly after Captain Jace Hughes and his team recover hundreds of surviving Eternal refugees, disaster strikes. A recently unearthed fauna dome, one of many biological arks on Earth, is destroyed and several people are killed.

All proof points to the Eternals.

Meanwhile, shortly after the slip tunnel at the center of the planet is shut down for good, a strange distress signal is detected. It appears to be coming from somewhere on the planet, but the exact coordinates are unknown.

Two investigations are launched. One for the saboteur; the other for the source of the signal. With rising tensions between the colonists and the Eternals, Jace must do everything he can to prevent a bloody confrontation. 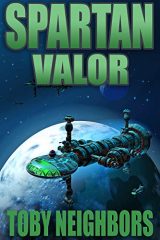 Only the strong survive on the hostile planet of Apex Venandi. Space Marine Orion Porter is stranded with his Master Sergeant “Money” Eubanks and the injured Staff Sergeant Barnes. Surrounded by hostile natives, and running out of resources, their only hope is the return of the Fleet. Their call for help was beamed into space, but no reply has come. For the foreseeable future, the only help they can count on is themselves.

Apex Venandi holds an invaluable resource. Ignatius Xelum is an ultra rare element needed to power intergalactic star ships. Humanity’s fleet is dependent on IX gas, but mining it on a world filled with five intelligent species who are constantly at war with one another may be too a great a challenge, even for the vaunted Space Marines. 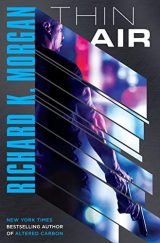 On a Mars where ruthless corporate interests violently collide with a homegrown independence movement as Earth-based overlords battle for profits and power, Hakan Veil is an ex–professional enforcer equipped with military-grade body tech that’s made him a human killing machine. But he’s had enough of the turbulent red planet, and all he wants is a ticket back home—which is just what he’s offered by the Earth Oversight organization, in exchange for being the bodyguard for an EO investigator. It’s a beyond-easy gig for a heavy hitter like Veil . . . until it isn’t.

When Veil’s charge, Madison Madekwe, starts looking into the mysterious disappearance of a lottery winner, she stirs up a hornet’s nest of intrigue and murder. And the deeper Veil is drawn into the dangerous game being played, the more long-buried secrets claw their way to the Martian surface. Now it’s the expert assassin on the wrong end of a lethal weapon—as Veil stands targeted by powerful enemies hellbent on taking him down, by any means necessary. 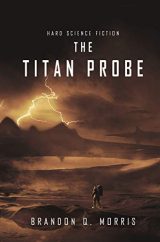 In 2005, the robotic probe “Huygens” lands on Saturn’s moon Titan. 40 years later, a radio telescope receives signals from the far away moon that can only come from the long forgotten lander. At the same time, an expedition returns from neighbouring moon Enceladus. The crew lands on Titan and finds a dangerous secret that risks their return to Earth. Meanwhile, on Enceladus a deathly race has started that nobody thought was possible. And its outcome can only be decided by the astronauts that are stuck on Titan.