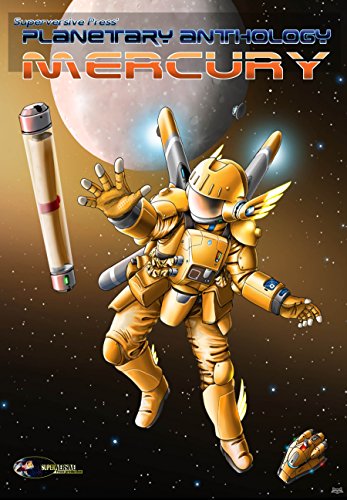 Innermost of worlds, blasted by the sun by day and frozen by night, Mercury remains an enigma. Mythical Mercury was also the messenger and trickster, and known for blazing speed and wit. Here are thirteen tales of science-fiction and the fantastic featuring Mercury.

Throughout history, the planets of our solar system have meant many things to many people; Planetary Fiction explores the themes associated with these heavenly bodies as well as their astronomical, mythological, and in some cases even alchemical significance.

Included in this volume are

“In the Palace of Promised Immortality” by John C. Wright
“Schubert to Rachmaninoff” by Benjamin Wheeler
“The Element of Transformation” by L. Jagi Lamplighter
“In Tower of the Luminious Sages” by Corey McCleery
“The Haunted Mines of Mercury” by Joshua M. Young
‘Quicksilver” by J.D. Beckwith
“Ancestors Answer” by Bokerah Brumley
“Last Call” by Lou Antonelli
“Deceptive Appearances” by Declan Finn
“mDNA” by Misha Burnett
“The Star of Mercury” by A.M. Freeman
“Cucurbita Mercurias” by Dawn Witzke
“The Wanderer” by David Hallquist