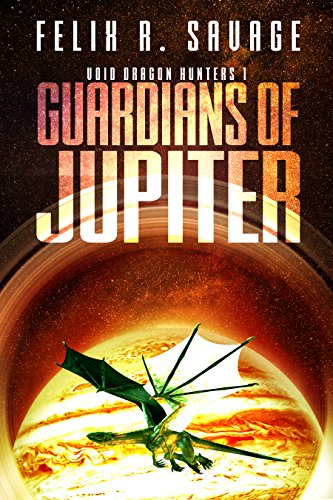 In 2322, eight-year-old Jay Scattergood found a Void Dragon egg in his garden.

Humanity survived the death of the sun, but now we’re under attack by the Offense. These intelligent, aggressive aliens also lost their sun to a Void Dragon. They lost their home planet, too. Earth, now orbiting Jupiter, is still habitable – though much colder than it once was. The Offense will do whatever it takes to destroy humanity and take Earth for themselves.

The Offense’s self-burying, radioactive mines are the scourge of Earth’s space fleet. Jay, now a conscript in the tech support division, thinks he can fix the code for the mechas used to locate and defuse the mines, potentially saving countless lives. The next thing he knows, he’s on the front lines of an interplanetary war. But that’s not his biggest problem …

He still has his Void Dragon egg hidden in his laundry bag. And it’s starting to speak to him.

Guardians of Jupiter is the first book in a new military sci-fi series starring the Void Dragons, a race of space dragons who eat stars. The latest action-packed saga from New York Times bestselling sci-fi author Felix R. Savage has it all: space battles, humor, a cast of unforgettable characters, scientific speculation, and dragons!