New Release Spotlight: THE GOOD, THE BAD, AND THE MERC 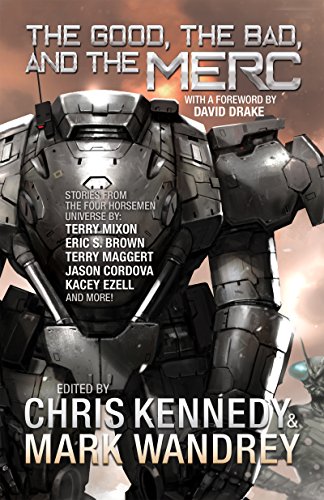 The third anthology of the Four Horsemen series rides forth.

It’s the Twenty-Second Century. Humanity has taken its first steps into the galaxy, and we’ve found ourselves in a vast playground of alien races, environments, and cultures. As the newest players on the universal stage, though, our position is readily apparent—we’re at the bottom of the food chain.

Welcome back to the Four Horsemen universe, where only a willingness to fight and die for money separates Humans from the majority of the other races. While some of the stories inside deal with mercenaries, others introduce readers to the other guilds, organizations, and races that make up the landscape of the Four Horsemen universe, as well as providing additional insight into the characters of the mainline novels. What’s it like to be a medic on the beach or to learn how to kill from a mother not your own? Come find out!

Edited by bestselling authors and universe creators Mark Wandrey and Chris Kennedy, The Good, the Bad, and the Merc includes sixteen all-new stories in the Four Horsemen universe by a variety of bestselling authors—and some you may not have heard of…yet. In a galaxy this big, you’ll find that some of the races are good and others are bad, but only the best are mercs!

“What I like about Chris and Mark is the amount of action in their stories, now they’ve rounded up some like-minded authors, given them the seed and expanded a universe that was already bristling with possibilities. You don’t need to read the previous Four Horsemen stories to enjoy this, but it does help. Just be warned, it is addictive.”

“A diverse and clever collection of intelligent mil-scifi. A sense of humor, perhaps the gallows kind, is evident. Well done!”

“What can I say? I am really loving this universe. The stuff by Chris and Mark is outstanding and in these short story anthologies, some great writers are coming in to play and they are bringing their A Game.” 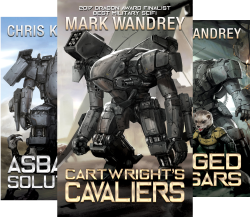