ON THE TABLE: Honest to Goodness Classic Traveller 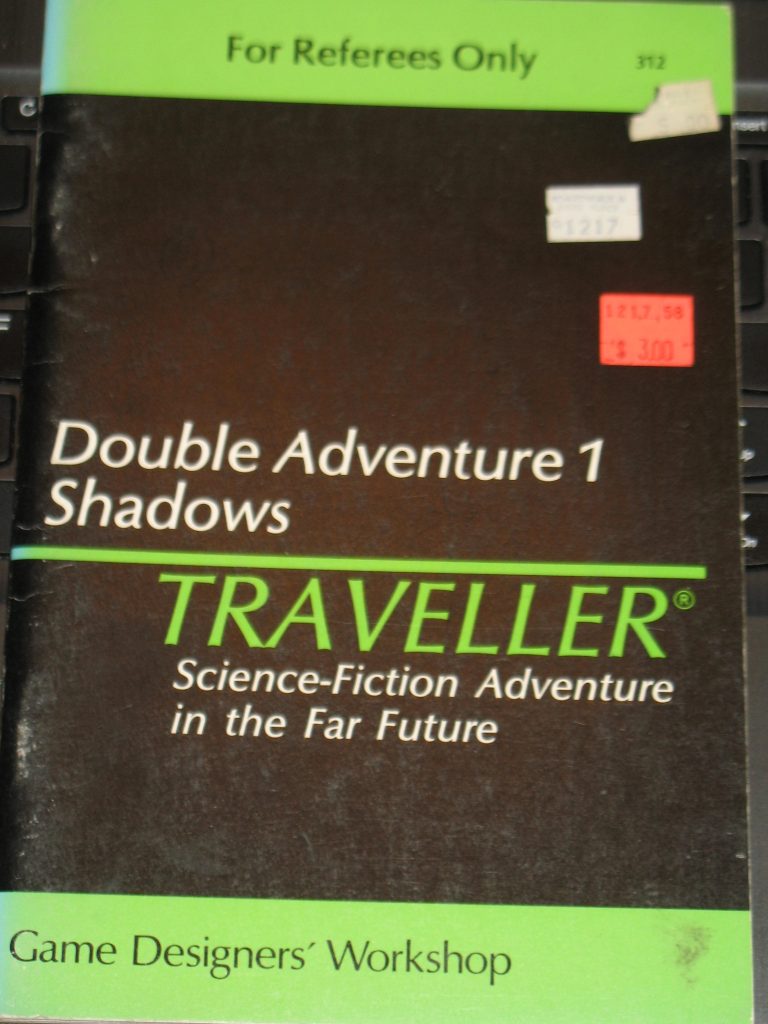 How role-playing campaigns finally click together is kind of a strange thing to begin with. This one, being a relatively rare “by the book” Traveller game is maybe a little more unusual. And the game in those original three Little Black Books is without a doubt a wide open sandbox campaign by default. Given that I have wondered for decades just how this could actually work in practice, I think this is worth breaking down in detail.

Now… this this started off with Brian rolling up a subsector and everyone else taking whatever character the dice gave them. We ended with a merchant with a free trader and an ex-Scout with a scout ship… but the merchant and his entourage ended up dropping out of the story when his player didn’t make it back into the game for several sessions. Two new characters entered the game at the next planet, a retiree played by Neal Durando and some kind of skuzzie “Other” type played by Sky Hernstrom.

I worked the passenger/cargo mini-game pretty hard for a couple of jumps. Making money is tough, so I was really hustling. Then Neal’s character made 100,000 Credits with his Gambling-2 and loaded up my ship with gear so that I’d stop hassling him for high passage.

So everything in the campaign at this point is pretty much randomly generated. There was a bit of a backstory that the referee had put together to provide both a backdrop and some “push”– some crazy coup happening across a dozen worlds. There was an ongoing subplot about this psionically gifted kid and his mother that were on the run from several governments. I had hints about what some of the other worlds were like… but no clear idea of why I would really go to one over the other.

We were going to just ship out to the next world, but Sky wanted to check for patrons first. He gets this scientist wanting us to steal some plans back from the Mining Corporation. We started to kick around how to pull that off exactly, but somehow whatever we were “supposed” to do went out the window and we all ended up interrogating the guy trying to find out what he knew that was so important. When he mentioned that he’d discovered ancient alien pyramids, we insisted he take us to see them.

Suddenly the referee had to come up with something on the spot. Or maybe he had this in mind to begin with. Who knows? (And hey… it’s more fun when the players never find out anyway.) We don’t just fly out to the site because we want to keep all this on the lowdown. We travel one world hex or so by boat. The referee describes these gigantic whale-like creatures and thinking of Alan Dean Foster’s Cachalot I tell him I’m rigging up a weird Doc Brown type helmet to let me communicate with them. Even with Electronics-3, I fail the roll and end up badly electrocuted. We took to the ATV for the last leg of the journey, cruising over sand dunes. We rolled the vehicle at one point and sighted a Bandersnatch, too. (It was Dune levels of monstrous.)

Now I have to say… this feels right to me. Traveller is a different thing when you’re playing somebody else’s universe compared to freely throwing anything you remember from any science fiction novel. Of you’re “blocking” in your attempts to run Traveller, I suggest you stop trying to play the “official” setting correctly. That turns into an endless project of sorting out the contradictions between a half dozen editions of the game and it causes play to grind to a halt. Traveller is exactly the same sort of hodge podge Frankenstein’s monster that AD&D was… and it is engineered to work well with whatever you want to glom onto it.

We get into the pyramid and get inside and suddenly the other players get real careful. This doesn’t compute with me. I act like my ex-Scout has looted countless sites. I get on the winch cable and head to the lowest possible level, claiming that the black globe generators are always in this special sanctum sanctorum.

Of course there’s critters in there. The first batch gives me a scare. I gotta say… playing an ex-Scout with no combat skills and a shotgun? WOW. This system just plain works. It’s so easy and it makes sense. I love it! (Combat is simultaneous most of the time… and you basically just look up your mod for armor and range and just go. Lots of flavor, no generic-ness, and zero friction!)

So this one room has a shimmering doorway. I check it out, taking a dead critter and touching the “field” with it. I get shocked so badly, two attributes drop to exactly zero. We nearly called off the adventure at that point, but the laser turned on and started shooting own starships. I recuperated back to, what…? Strength and Endurance of 1 each…? I was a mess.

My party was still as skittish. I made up new explanations about what was “obviously” going on, and cruised on to explore. And find the black globe generator cache, too. I have no reserve so I don’t search every single room systematically. I only look at the important stuff. We get to this giant pendulum thing and I start opening up cases. Some have some gadgets. Others have some more critters. Fast critters. I run away and the party doesn’t even try to help me out. I climb up the winch cable after running away and somehow escape.

After this there was a whole bunch of nothing. It felt like an old text adventure where we were stuck. Again, we didn’t have the reserves or the manpower to systematically go room by room. I stopped and thought about it all. That shimmering room that nearly killed me? I told everyone it was “obviously” the key to everything. And also, there was sure to be a cache of black globe generators in there, too.

So I duck tape plastic bags all around my body. The referee demands to know how I would have it. I declare I’m an ex-Scout, there’s no way I would be without out. Neal says this is obviously an “Aspect”– at least in Fate. (“Of course I have duct tape!”) I tape the bag over my head. I don’t even make any eye holes. Then I run towards the doorway, leap through the portal and tumble on the other side, cop show style.

And the clue I find there says the thing I’m looking for is at the top of the pendulum. I race back over to it, climb to the top… and I’m disappointed to find that it’s just this same old place we’d already found nothing in. The rest of the crew shows up… and I say I’m searching everything in this area.

We find a secret passage. This was presumably by the rules and not some sort of mercy style “kickstart the stalled investigation” gimmick like in Call of Cthulhu. (I’d have been mad if it was.) Neal shoots the passage open with his shotgun and these flying critters come out. Somehow we managed to hit three or four a combat round thanks to the shotgun rules. They fail a moral check and fly away.

Inside… it’s all the alien machinery that runs the place. And also… a Doc Brown type helmet we’d seen in murals. I put the thing on. Checked for psionics ability– I think I got a one– and then I’m talking to this alien computer. I turn off the laser, solving the adventure and then start asking questions. I asked a good half dozen stupid ones that got no response. Then I got asked these:

Okay, no alien space princess was in danger so I could go rescue here. But I finally found a lead on the ancient alien artifacts I just knew I’d find!

And there you have it. Just like a great many people have reported, it turns out that the greatest treasure of all in a Traveller game turns out to be… information. The character of “ex-Scout Percival Jones” didn’t really exist before this, either. Neal says everything he knows about Electronics was discovered by trial and error…. And yeah, that’s definitely Percival right there!

Of course, he’s such a maniac that no one will ever believe anything he says about ancient alien artifacts. But that’s a different story….