ON THE TABLE: Journey to the Planet of the Amazon Women 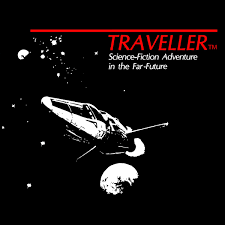 Okay, this was a really neat Traveller session. Yes, my character was in the hospital at the start of this one. And yes, the planetary authorities were not at all pleased at my having saved the world last time. Can you believe it? They actually credited us with turning the alien pyramid laser tower on, so I got _ZERO_credit for having turned it off! Meanwhile, the mining corporation summarily gassed the life forms we had discovered inside there.

I was ticked off about all of this. But the killing of those life forms that might have been something? Okay, that *really* ticked me off. The referee said they were just like the other critters on the planet, but I didn’t really buy it.

So there were were, planning our next move after Neal’s character raked in another 100,000 credits gambling. That’s more than I could make sticking my neck out on two crazy jumps with my trusty Type-S. But, hey… I made some really neat friends attempting to land on a world in the midst of a full scale naval battle, right? Those same danged friends who would subsequently leave it to me to take on all the risks exploring an alien pyramid. Standing by and laughing at me as I’m chased around by alien rat creatures. Creatures that I’m really angry that J. Random Mining Corps exterminated while I was out of commission.

Is there a term for this? A stack of unplanned events in an rpg that nevertheless cohere into an extremely intense emotion on  part of one player… with the other players laughing at the guy’s misfortune in that he actually cares… while the referee just quietly goes on making rulings with no discernible regard for what’s happening? I can tell you how everything culminated into this point. I can’t explain why I am so into it. This just plain shouldn’t work as well as it does. But it does.

(If you need to call it something… “OG Gaming” is as good as anything else.)

So I propose a plan. We’re gonna go to the unexplored planet. We’re going to survey the place. Maybe drop off the lady that’s on the run with her psi-powered son. I can collect 80,000 credits for the world survey… and 37,500 credits from the dame. And then I’d be like… one one-hundredth of a the way to having a fully tricked up turret for my ship’s hard point.

We head out. There’s some die rolls. We come out of jump. I want to slingshot around the planet and head to the gas giant to refuel before landing. But we get closer and we’re hailed. It’s a girl. She’s friendly. She totally wants us to land. So many beautiful farms. A bucolic paradise world. What’s not to like?

I say a bunch of dumb stuff to here. I’m like the least debonair person in the universe. But I just can’t seem to provoke a negative response. Being that this is the planet nobody comes back from… this is doubly alarming. Somehow, I randomly ask if she’s got any sisters. Lots, she says. There’s some sort of lamely flirty exchange and I’m like… “hey, what’s your dad gonna say?” Something like that. And yeah. She says she doesn’t have a dad or brothers.

We chew on that a bit. Neal persuades me to skip going to the gas giant. (And yeah… we had to refuel before leaving. This was first edition Classic Traveller and– no matter how much I complained– the Type-S used up all its jump fuel with every jump. Grrrr!) We pick this spot in the middle of the ocean and refuel there. Then we flew out to a totally random plantation, not one we were directed to.

I try to persuade the dame to pay her passage and get lost, but she’s not sure about staying. Then a bunch of hot Greek-looking women show up. Artemis. Hera. Athena. A bunch more. They persuade us to have dinner. Neal calculates that we are far enough away from the starport that we have time to do it and then jet. We meet a couple of dudes including one good-for-nothing ex-Scout that’s been missing a while. We say how awesome it must be to live on the planet of the hot Greek women, but they aren’t too excited about it. Finally the other shoe drops and we realize we’ve stayed too long.

We run back to the ship, get her warmed up and try to blast out of there, but laser towers had popped out of the ground. We take a fuel hit, a hull hit, and a jump-drive hit. Neal’s character patches the hull after getting everyone into vacc suits… but even at Mech-2 he can’t fix the jump drive back to Jump-2. It’s okay, though. We can still pull a Jump-1. Referee rules that we can jump from the system… but we won’t have enough fuel to maneuver when we get back. Ships are scrambling from the planet, but something is coming out of the sun. The stars go dark. I somehow reverse engineer our position using our survey and known position… and then somehow manage to get a plot. We jump out and make it back to lame-o Mining world.

We get back into radio contact with Mining World and the referee starts to gleefully explain how everyone wants to know what we did to cause the star to go out, but he gets shouted down by Neal and me explaining that the light wouldn’t have travelled there yet. I collect the 80,000 credits for my survey. We realize the scout base will fix up the ship for free. (Sweet!) Neal’s character makes fun of the scouts there for never exploring this world hex next door before when we’d pulled it off.

That should have been the end, but I wasn’t done. I told the Mining people that I had held up my end of the bargain, but I new a few things about that world that they might want to know. They offered some credits, but I told them they needed to set me up with a fully operational turret of awesomeness. They said maybe they could give me a voucher to pick one up at the next star system, but they don’t know what weapons would be available. I told them I could given them a voucher that they could redeem to maybe find out what I know.. depending on what’s available.

I don’t what these guys are thinking, but I somehow ended up with a voucher for the turret of my dreams.

Oh yeah. And aliens from another dimension are eating entire stars and we’re the only people that know about it right now.