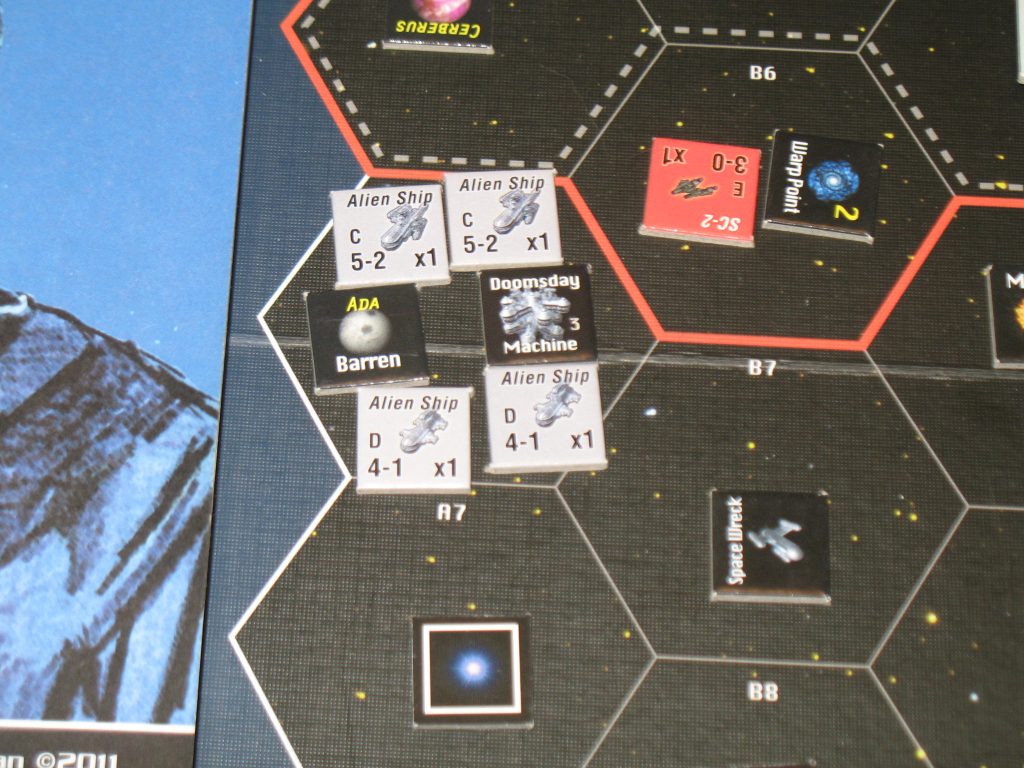 This game has been tough to get back on the table. “Real” wargamers tend to not touch space games. Euro gamers cannot handle the unmitigated direct conflict. Role-players have the luxury of just kicking back, rolling some dice, and watching where everything leads; their multi-year continuous campaigns leave them no time for space battles. Microgamers have the awesomeness that is G.E.V. implemented with a minimum number of rules and yielding a maximum amount of tactical depth. Worst of all, fans of designer Jim Krohn have to deal with the man’s propensity to one-up himself, distracting us from his previous accomplishments by producing impossible innovations that we never imagined were possible.

Sometimes it’s all just too much! I’ll tell you where I went wrong with this one, though. I was so hot to play the new stuff from the expansion and I was so fearful of my son’s capacity to get into it, I chose to ease him into the game with one of the cooperative scenarios.

Big mistake. It is a truth universally acknowledged that cooperative games can only produce a miserably forgettable experience that destroys the best gaming has to offer, substituting in that which can be easily gotten from solitaire or computer games. It is clearly a waste of finite and precious moments at the table.

I should have known better!

Not that this session didn’t have its hiccups. Setup took some time. Explaining the rules while we played led to a few mistakes that had to be fixed once we caught them and a couple significant ones that could not be fixed at all. And there is a bit of a learning curve with this, no doubt! Gameplay screeched to a halt when I reminded everyone that ship technology is tracked on a counter-by-counter basis on the back of the econ sheet. (Whoops!)

None of that mattered. The universe that unfolded before us was simply awesome. As our scouts made their first tentative steps outside our home systems, we discovered warp gates connecting opposite sides of the board, ancient alien space wrecks loaded with lost technology, and worlds defended by alien spaceships. The latter which we intended to conquer for ourselves were instead blown to bits by a monstrous “Berserker” we unwittingly stumbled upon and awakened.

I had feared that the Doomsday Machine would wipe out my guest and first time player due to its proximity to his home systems. It turns out that the movement of the world destroyer was limited to the deep space portions of the map. It would mindlessly move towards any planet, ship, or asteroid counter in that section… and while it could jump over any unexplored hex, it could not end its turn within one. Although the death machine put an end to any plans my guest and I had of either colonizing deep space or invading each other, it was not at all the showstopper we had feared!

Once we realized what was happening, the race was on. My guest and I had little choice but to throw our star fleets against my son’s section of space. Whoever burned down three colonies there first would be the winner.

I had opted for carrier technology. I went with Fighter-1, Attack-1, and Defense-1 for my first fleet. Two carriers trudged across the board loaded with five fighter squadrons. Just as I got to the edge of deep space, though… my guest moved a ship onto the warp point. This pulled the “Berserker” back in that direction… putting it in a position where it could attack my fleet before they could get through the deep space hexes to get to their objective!

I took an awful risk. I moved that entire fleet into an unexplored hex along with a scout. This was the only way to get across the board without facing the Doomsday Machine. Well… it turned out that there was a Danger! chit there and two turns of my production was wiped out in an instant. (Did I mention that exploration is a first class element of this 4X strategy game…?)

That was okay, the new players needed a handicap of some kind if they were going to play against an old hand like me. Yeah… that’s the ticket! (To tell the truth, I could probably have killed the Doomsday Machine with negligible losses. What a dumb move!)

I had already produced a stack of six Attack-1 Defense-1 destroyers to follow behind my carriers. What I needed now more than anything else was speed. I spent almost all of a single turn’s production to get Move-2… and waited until the next one to build a stack of six improved destroyers.

Meanwhile, on the other side of the board my son’s assault fleet stalled against me as it ran out of scouts. Rather than send replacements, he ended up building a dreadnought to go after a carrier, a raider, and a couple of destroyers that had shown up on his doorstep. My son mixed up a rule regarding size technology– he thought the tech level determined the hull size he could produce and not just the next step up for ship class– but the resulting advantage was not enough to protect his colony.

My guest took a couple turns wearing down and then finally destroying the colony… and then replaced it with a colony of his own. This did not put him on the cusp of winning as it would be a few more turns before that colony would ascend from to production 1, 3, and 5… only then nabbing him another point for the short game victory conditions.

Meanwhile, my slow destroyers and my fast destroyers had managed to enter my son’s space simultaneously at two different worlds. I leveled one and reduced another. My guest then evened the score by destroying another enemy colony. I had only one chance to win. Leaving my slow fleet to finish off its target, my fast fleet jumped two hexes to go after my third and final objective.

Now… you might think that this would be a disastrous outcome for a fourteen year old boy playing a game like this for the first time. I would have thought that, too. After all, the computer games he plays have epic graphics of three-dimensional starships. Our playing time was a good three hours, maybe more. There’s arithmetic and bookkeeping involved in this game. And all of it was “wasted” with him sitting there getting demolished by fleets on either side of his space empire.

But that’s not what he saw at all. What stood out to him was the effectiveness of a fully loaded carrier in battle. What struck him was the awesomeness of its firepower and how quickly it could be brought to bear. “Next time we play… I’m going to build carriers!” The thought was not concerned so much with what was just done to him. They focus was instead on leveraging what just happened in order to do it to  someone else!

This is exactly the same sort of reaction you see in players of classic D&D whose characters are eaten by a combination of pit traps and kobolds in a first level dungeon; the sort of people that experience a crushing setback, and yet immediately begin rolling up new characters without even bothering to consult everyone as to whether or not the group should try again.

There is no question that there will be another game of Space Empires at our house. And the reason for that is the adrenaline rush that comes from direct conflict between human opponents in a rich environment with a range of strategic options available. This really is some of the best gaming that can be had today. On a computing device or off. 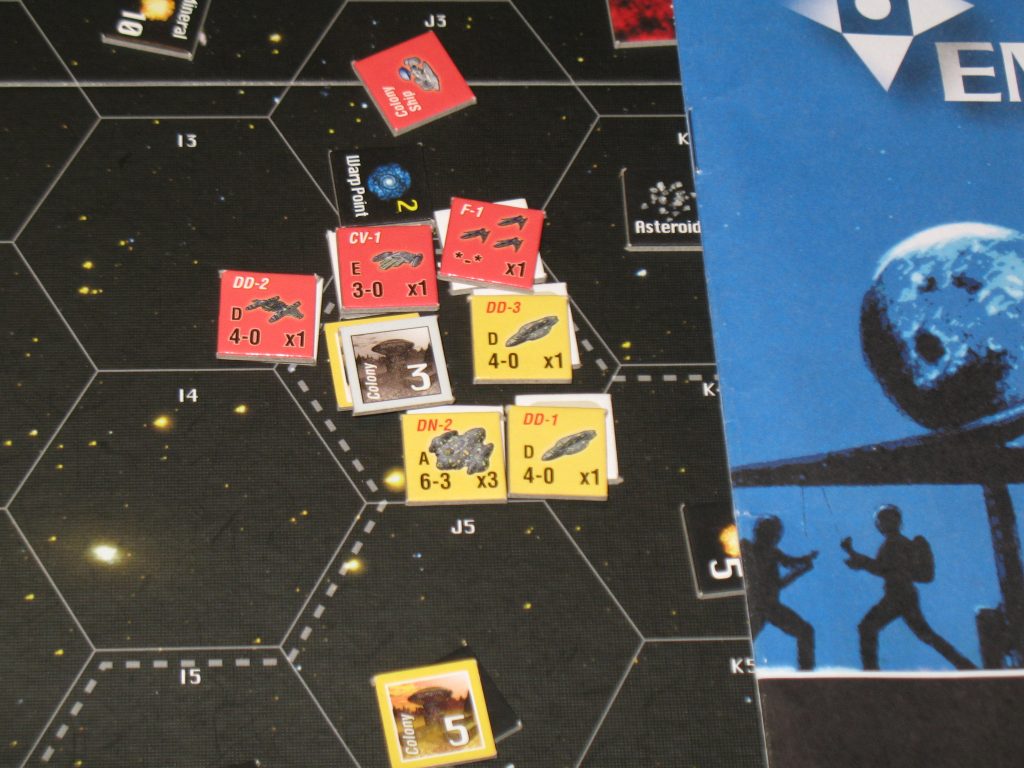