ON THE TABLE: Talon Scenario #6 “Secrets” 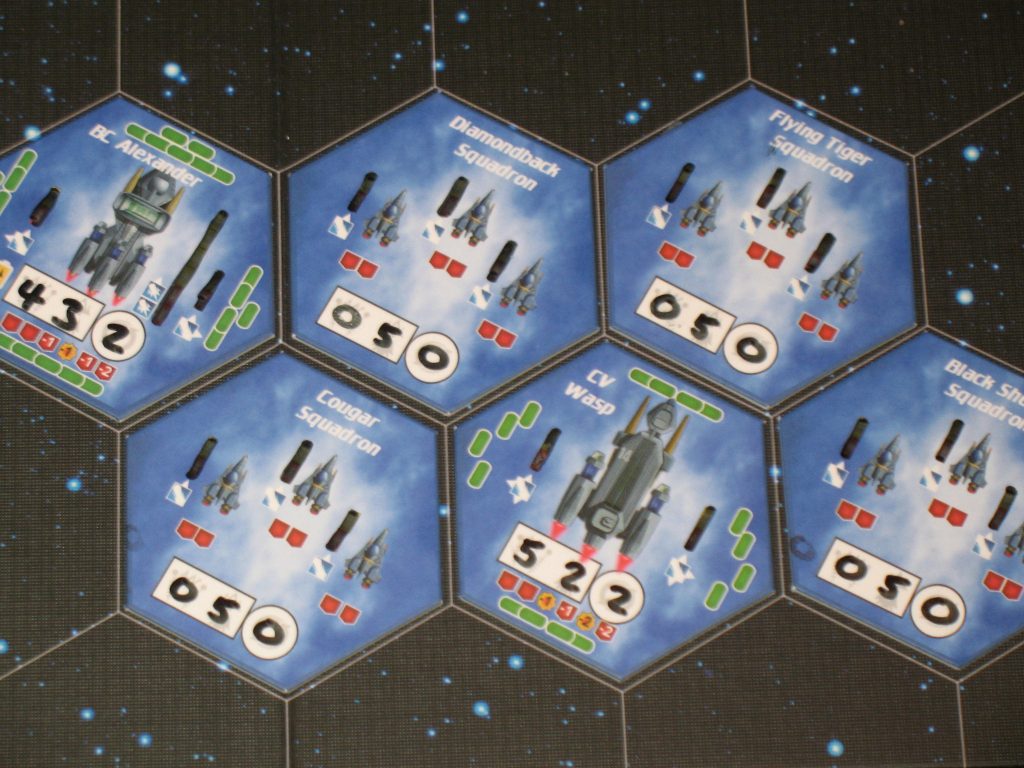 This is the game that delivers on what no other tabletop space game has ever done in the history of space games: it’s gives you full featured fleet battles with almost no tedium. Set up is painless. The action is furious. A great deal seems to happen moment to moment. The game rewards planning but never feels like a real brain burner. And best of all, you get a decisive outcome somewhere in the vicinity of two to three hours.

And that’s not even the best thing about it. No, all of that is just the tip of the iceberg. The prelude. The prologue. The opening riff. The table setting. The hook, even…! You can play it half a dozen times and still not see the main event, because all of this is done for the express purpose of addressing one of gaming’s biggest and most aggravating of open problems.

And it’s this scenario right here demonstrates that Jim Krohn and GMTGames have pulled off something truly astonishing. Why? It pits a Terran carrier up against a Talon dreadnought. Even better, the two foes locked in mortal combat here have support ships making things even more interesting. This is the type of battle I have wanted to play for decades. And more than just the raw playability here, more than just the ease with which you can get this on the table and actually played… these thoroughly iconic ships finally behave like I always imagined they should.

Now this session was way more interesting than usual due to some hard earned tactical insight that was won from previous battles. My son finally figured out how to leverage the Talon’s afterburners in order to achieve a superior position in the opening shots. The results were devastating.

Here you can see two of my fighter squadrons very nearly knock down the dreadnought’s front shield. The second wave of fighter craft flanked by a battlecruiser looked like they were all set to finish it off in the final impulse of the turn, but it just wasn’t meant to be. 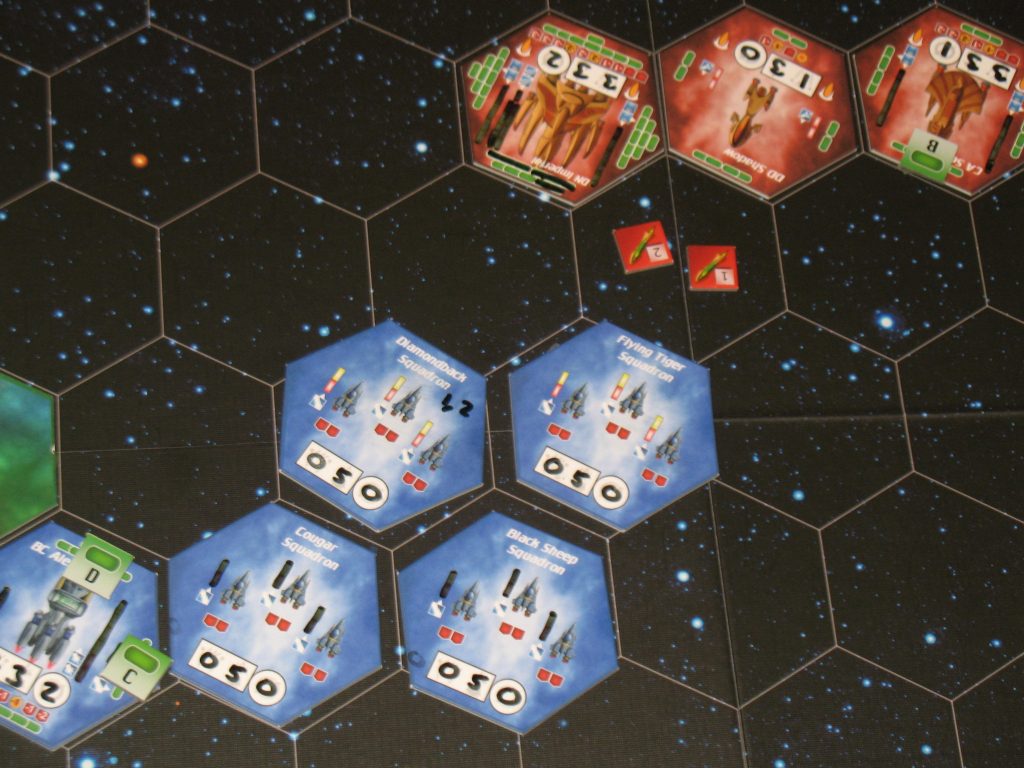 By allocating power to maintain the initiative and firing his afterburners at just the right moment, my son was able to cruise in and take out my rear fighter units before they could even fire. I thought I could still take out the dreadnought with my battlecruiser, but when my big ship moved in for the kill I realized that only my phasers could fire through the weakened shield. My anti-matter torpedoes were out of range! 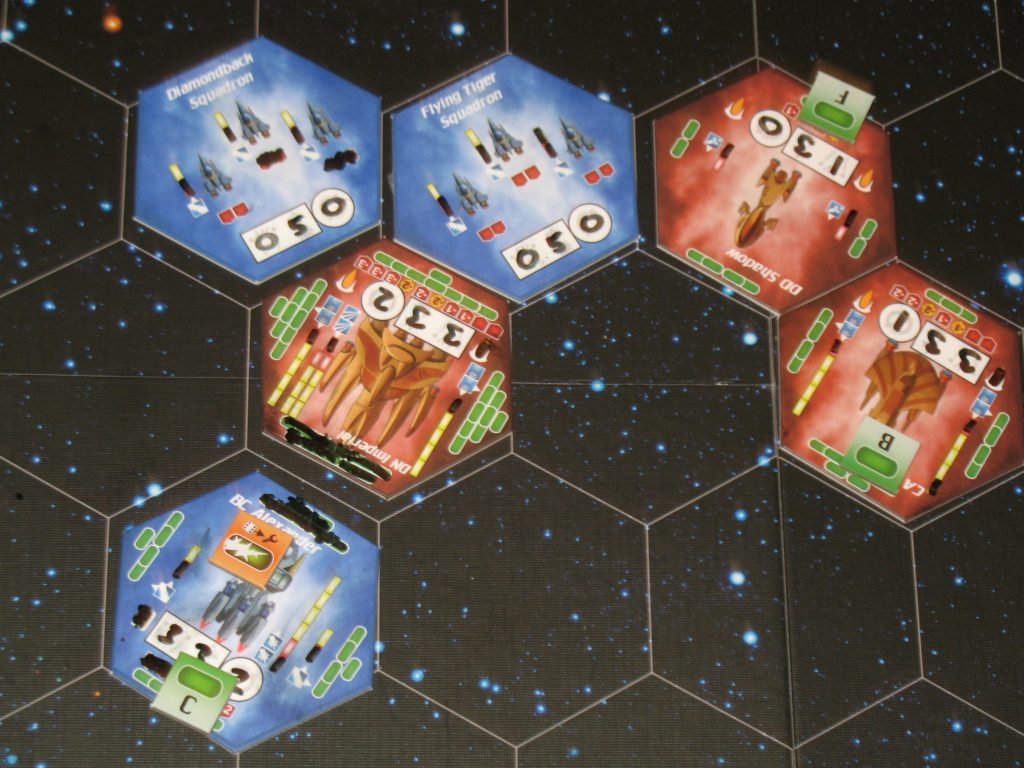 This was absolutely disastrous, but I was still in the game. In the intervening chaos I somehow managed to continue pounding the dreadnought while keeping my carrier alive. Every move, every point of power, every turn radius marker counted. My battle cruiser and carrier very nearly killed the destroyer when it went through the nebula. (The dice hate me!) The Talon destroyer fired missiles to dent the threat my remaining fighters posed. They wheeled around and took down the rear shield of the dreadnought. My carrier and his dreadnought then ended up on course to make a battle pass with each other. The dreadnought couldn’t fire due to massive power loss. My carrier pulled passed him, seized the initiative, and then finished it off with two final phaser hits.

It was absolutely glorious.

All I had to do was warp out and I would claim victory. My super “secret” awesome ship had destroyed the opposing super “secret” awesome ship. This would be an instant win! But then I read the rules on that… and realized that it just wasn’t going to happen. Even if I had thought it through and known I needed to slow down right then in order to have a chance to punch it at the end of the following turn, I’m not even sure if my FTL drive was spooled up. (Gaming note: this is why you want to pay attention to how many turns have elapsed in a game!) The Talon destroyer and cruiser would be able to run down my carrier with absolutely no problem.

We learn more about this game every time we play it, why every little piece of it is set just so. It really is a masterpiece. But the thing that really gets me is how it captures this vision of lumbering behemoths of space struggling to recharge their weapons as fighters blaze past looking to set up a perfect kill shot. That’s how it works in all the space battles in my head. And this is the first time I’ve ever seen anything like at the tabletop.

Note: this game is hard to find right now, but if you want another batch to hit the market, it won’t be printed again until GMT Games gets another 274 preorders. If you’re dying to play this and aggravated that it’s nowhere to be found, please jump over to the P500 page and help speed things up…!