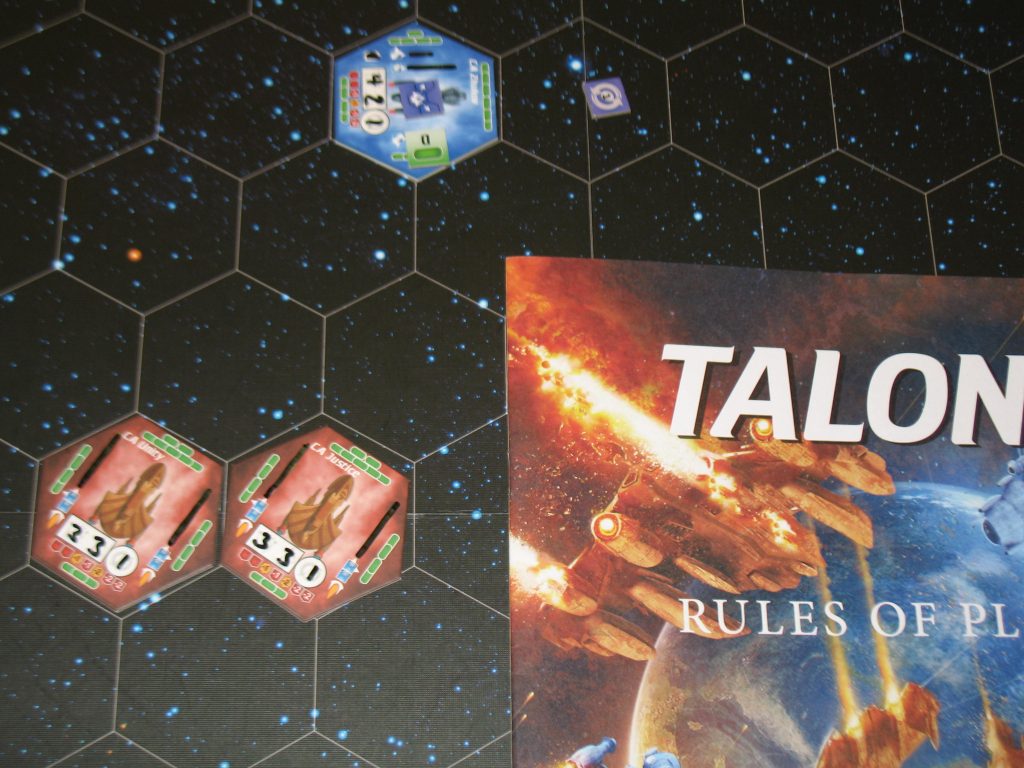 The ardent space gamer will tear into this game and crunch through all the scenarios like it’s nothing. But how does it work with the average gamer that’s only just now testing the wargame waters…?

Well I’ll tell you, the opening scenario which starts in media res tells you everything you need to know about how the Terrans can pull off awesome decisive victories by using their battery power to steal the initiative at an opportune moment. I didn’t notice it before, but it also backs the game up after that and demos how the Talon can use their afterburners to move into position to deal a deathblow before the Terrans can steal the initiative.

Unfortunately, to someone that only just barely grasps how to move and shoot, this is a little bit deep. Which means that in a followup with scenario #2 you’re liable to get another demonstration of those same tactics. That’s what you see pictured here: two Talon cruisers about to afterburn into position for two ideal range-2 shots with their disruptors. Of course the Terran pictured here isn’t going to get his torpedo into arc even if he powered through the turn before the Talon move. But hey– swooping in for the kill on afterburners is just what you do when you play the inscrutably evil Talon!

My victim– er, opponent I mean– had elected to split up his forces. I offered to reboot the scenario with this first demoralizing explosion of space death, but he wanted to see how it played out. Could the cruiser’s wingman avenge his fallen comrade? The acceleration rules got a real workout as the angry Terran blew across the board, weapons hot. My Talon had no weapons charged at all, so they elected to beat it, even using their last afterburner to postpone the reckoning for another turn.

Things got dicey when the remaining Terran captain elected to take a risky torpedo shot at range three. He hit, knocking down my rear shield and doing a hull hit. If he could close in just one more hex, his phasers would be able to eat me up, possibly doing a critical! Not good. This is where we had our one rules dispute emerge: on his next move, he wanted to sideslip over one hex… and then move again in order to set up the shot. Alas, a sideslip is not a double move in Talon, so that plan didn’t work out.

When my disruptors finally charged up again, the question became… could I bring them to bear before the faster Terran ship could get away and recharge? Well I’ll say that whatever it is that makes real life fighter combat work is not intuitive. My opponent zigged when he should have zagged… and that made it possible for me to just barely get a shot with one ship at range two and the other at range three.

Space game teachers the world over have long taught that you should always let the new guy win. I’ve been far less sanguine about that ever since a Frenchman pulled the trick of losing badly in chess only to utterly crush me in the rematch. My philosophy is to play as well as possible in order to convey the standard tactics of the system. Of course, the question in a situation like this isn’t whether or not the new guy wants to play Talon. The idea is to find out which particular brand of soul-crushing defeat is his destiny: the Commands & Colors kind, the G.E.V. kind, the Space Empires kind, or the Wizard Kings kind?! Or rather… what kind of combination of theme and resolution is this person’s “jam”??

And hey… if my tactical brilliance really is that astonishing, then I can still call it a win if we end up kicking back a few hours with Gregory Smith’s solitaire sub game The Hunters. Because with first rate games like these, even a no win situation is a winning hand. 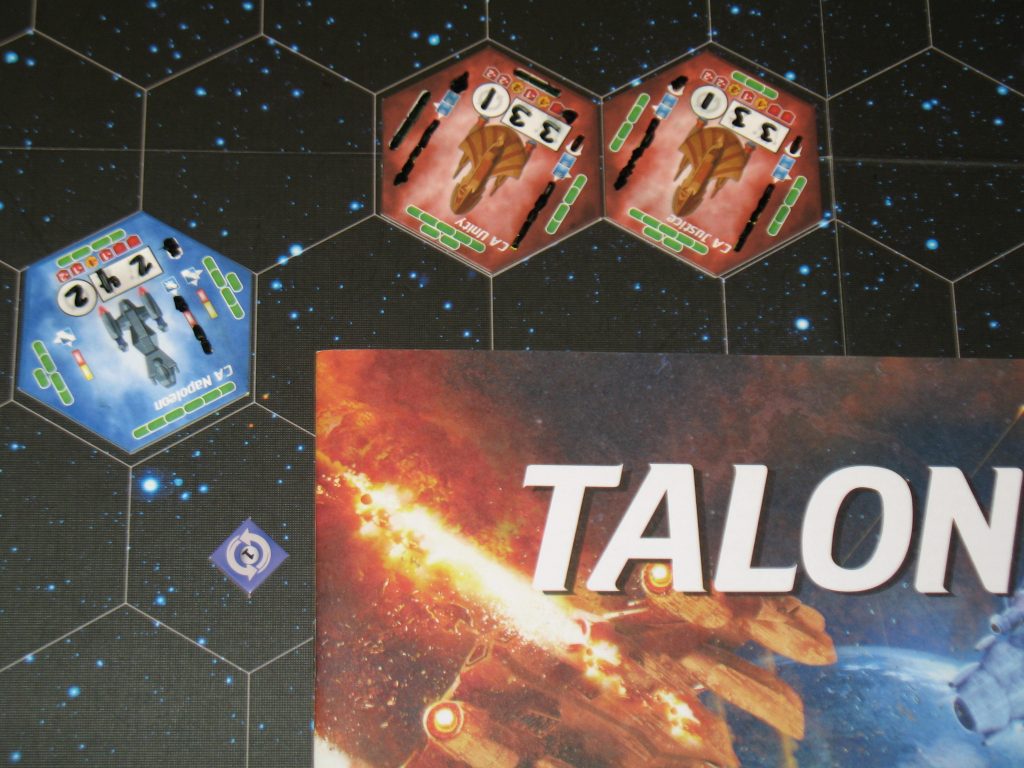